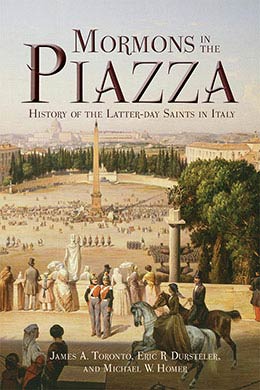 Mormons in the Piazza

History of the Latter-day Saints in Italy

James A. Toronto earned a PhD in Middle Eastern Studies from Harvard University in 1992 and joined the faculty at Brigham Young University the same year. He has lived and worked for twelve years in the Middle East and five years in Italy. He served as assistant director of the David M. Kennedy Center for International Studies at BYU and as director of BYU's Center for Cultural and Educational Affairs in Amman, Jordan. With his wife, Diane, he presided over the Italy Catania Mission (2007–10) and the Central Eurasian Mission (2015–17). Currently he is an associate professor of Arabic and Islamic Studies in the Department of Asian and Near Eastern Languages at BYU. In 2012 he was appointed coordinator of the Middle East Studies/Arabic program. His research and publications focus on Muslim immigration in Italy, Islamic law and education, and LDS missiology. His publications include chapters in Teaching Islam: Textbooks and Religion in the Middle East (London: Lynne Rienner Publishers, 2007) and Diritto e Religione nell’Islam Mediterraneo (Milan: il Mulino, 2012), and a coedited book, Religions and Constitutional Transitions in the Muslim Mediterranean: The Pluralistic Moment (London: Routledge, 2016).

Eric R Dursteler joined the History Department of Brigham Young University in 1998, where he is professor and chair. He earned his PhD from Brown University in 2000. His research focuses on gender, religious identity, and food in the early modern Mediterranean. He has received research fellowships from the Fulbright Commission, the National Endowment for the Humanities, the Harvard Center for Italian Renaissance Studies, the American Philosophical Society, the Gladys Krieble Delmas Foundation, and the Folger Shakespeare and Huntington libraries. His most recent book, The Medieval and Early Modern Mediterranean World, coauthored with Monique O’Connell, was published by Johns Hopkins University Press in spring 2016. His other publications include Venetians in Constantinople: Nation, Identity and Coexistence in the Early Modern Mediterranean (2006, Turkish translation 2012), Renegade Women: Gender, Identity and Boundaries in the Early Modern Mediterranean (2011, Turkish translation 2013), and, as editor, A Companion to Venetian History, 1400–1797 (2013). He is currently working on a book on food and foodways in the early modern Mediterranean. He is the editor of the News on the Rialto, and book review editor for the Journal of Early Modern History.

Michael W. Homer is a trial attorney and independent historian. He has published studies concerning Mormonism in Italy as well as other subjects including seven books and seventy articles. His book On the Way to Somewhere Else: European Sojourners in the Mormon West, 1834–1930 (published by the University of Utah Press) that includes accounts of some Italian travelers including Mormon converts was awarded the Mormon History Association’s Steven Christensen Best Documentary Book Award. He has also received the Utah State Historical Society’s Meritorious Book Award; Dialogue’s Lowell L. Bennion Editor's Award; the Mormon History Association’s T. Edgar Lyon Award of Excellence; the John Whitmer Historical Association Best Article Award; and the Arthur Conan Doyle Society’s David Kirby Best Article Award. He served as a member (1997–2014) and chair (2003–14) of the Board of State History. He is a fellow of the Utah State Historical Society; the Honorary Italian Consul of Utah; chair of the J. Willard Marriott Library Advisory Board, University of Utah; a board member of The Leo (a museum inspired by Leonardo da Vinci) and is investitured in the Baker Street Irregulars.