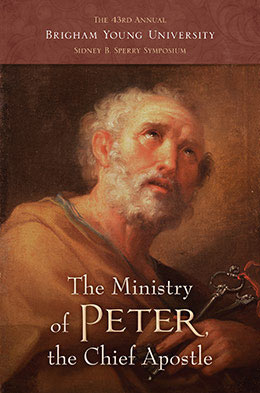 The Ministry of Peter, the Chief Apostle

This year’s Sidney B. Sperry Symposium honors the example, teachings, and legacy of Peter, the chief Apostle, who served as one of Jesus’ closest companions during his mortal ministry and then led his church after his Ascension. Of the original Twelve, the New Testament portrait of Peter is the one that is most fully drawn: the Gospels, for instance, provide glimpses of his personality and furnish a view of his strengths, his weaknesses, and, above all, his faithful devotion to his Master and friend, whose gospel Peter preached to the very end of his life. As a fallible but faithful disciple, Peter is a great example for Latter-day Saints and all followers of Christ, not because he perfectly followed the Lord and never made a mistake, but precisely because although he made mistakes and was chastised by the Lord, he repented, humbled himself, and showed us how the grace of Christ can make our weaknesses strengths, enabling us to serve powerfully and endure to the end. As President Gordon B. Hinckley has written, “Draw comfort and resolution from the example of Peter who, though he had walked daily with Jesus, in an hour of extremity denied both the Lord and the testimony which he carried in his own heart. But he rose above this, and became a mighty defender and a powerful advocate. So too, there is a way for you to turn about, and add your strength and faith to the strength and faith of others in building the kingdom of God.”[1]

In the tradition of Sidney B. Sperry, a noted latter-day scholar who served as an influential religious educator from 1932 to 1969, papers selected for this volume seek to combine scholarly and theological insights in ways that are both devotional and thoughtful, particularly through careful examination of scriptural texts and religious history. Accordingly, as this year’s contributions consider the figure of Peter and his teachings, they reaffirm fundamental doctrines and precepts while bringing new insights to our Latter-day Saint audience. In regard to Peter the man, some papers deal broadly with Peter’s ministry and example, considering him as a fallible but faithful disciple and as a powerful witness of Jesus Christ. To supplement these treatments, this volume has reprinted as an appendix the pivotal Brigham Young University address “Peter, My Brother” by Spencer W. Kimball. Other papers explore particular incidents from his life such as Jesus’ declaration to Peter about his being “the rock,” the nature of the keys that Peter received, his problematic denial on the night of Jesus’ arrest, his later ability to heal even as the Savior had, and his relationship with his fellow Apostle Paul. Two additional papers bring to light the contributions of Peter in a wider historical context by reviewing what current archaeology tells us about the setting of his life and about exploring his use in later Christian art and iconography.

Another set of papers deals specifically with texts written by or otherwise associated with Peter. Two papers examine the New Testament letters attributed to Peter, considering the issues that have been raised about the authorship of 1 Peter and the particular genre of 2 Peter, which as an example of testamentary literature serves as a type of “farewell address.” While Peter did not write any of the canonical Gospels, one of this year’s papers seeks to determine to what extent Peter’s preaching may have lain behind the composition of the Gospel of Mark, while another paper considers accounts of Peter in the New Testament apocrypha.

Other papers deal specifically with doctrines that Peter taught and church practices that he established. These include his revelation concerning the extension of the gospel to the Gentiles, the doctrine of calling and election, the importance of preaching and vicarious work for the dead, and the importance of loyalty to civil authority. Finally, another study highlights Peter’s importance to the Restoration.

Beyond those whose contributions appear in this volume as written works, we are grateful to those whose efforts helped produce this year’s symposium and this collection. These include Thomas R. Valletta of Seminaries and Institutes, Patty Smith and support staff of the College of Religious Education, and the blind reviewers who carefully vetted each submission and made helpful suggestions for all of the papers. Thomas Wayment, Devan Jensen, and the staff of BYU’s Religious Studies Center deserve particular mention for bringing a new level of professionalism and scholarship to this volume. In addition, we express appreciation to Elder Bruce C. Hafen, who delivered the keynote address, “Peter, the Melchizedek Priesthood, the Temple, and the Atonement,” at the symposium itself.

Finally, we are grateful for what Peter has taught us in both word and deed. Besides teaching vital truths and providing a powerful example in both weakness and strength, above all he is worth honoring for how he served as a witness of the Lord Jesus Christ. As Peter assumed active leadership of the church in the first days after the Savior’s Ascension, he led the way in choosing a successor to the fallen Judas Iscariot by laying out the qualifications of one who could serve as an Apostle. He should, Peter declared, be one who had “companied with us all the time that the Lord Jesus went in and out among us, beginning from the baptism of John, unto that same day that he was taken up from us, must one be ordained to be a witness with us of his resurrection” (Acts 1:21–22). These were, of course, the qualifications that Peter himself held. After receiving an early testimony from his brother Andrew (1:40–42) and then being the first, with Andrew, to be formally called (see Mark 1:16–18; parallels Matthew 4:18–20; Luke 5:1–11), Peter witnessed the entirety of Jesus’ formal ministry. But above all, he was a witness of the risen and living Lord (see Mark 16:7, 14; Matthew 28:16–18; Luke 24:9, 12, 34, 36–48; John 20:2–10, 19–20; 1 Corinthians 15:4–5).

The power with which Peter would bear testimony of the Resurrection throughout the remainder of his life is perhaps best anticipated by his hope and eagerness at the mere prospect of Jesus living again—his excitement that was exhibited at the news from Mary Magdalene that the tomb was empty. Indeed, it is the image of Peter running to the tomb that perhaps best encapsulates the wonderful zeal, and at times impulsiveness, that so characterized the personality of this wonderful, yet so human, chief Apostle known affectionately to his Master as “the rock.” It is a fervor and passion for Christ that we, as similarly fallible disciples, all strive to emulate as we seek to establish our own testimonies ever more firmly on the foundation that is our Savior.