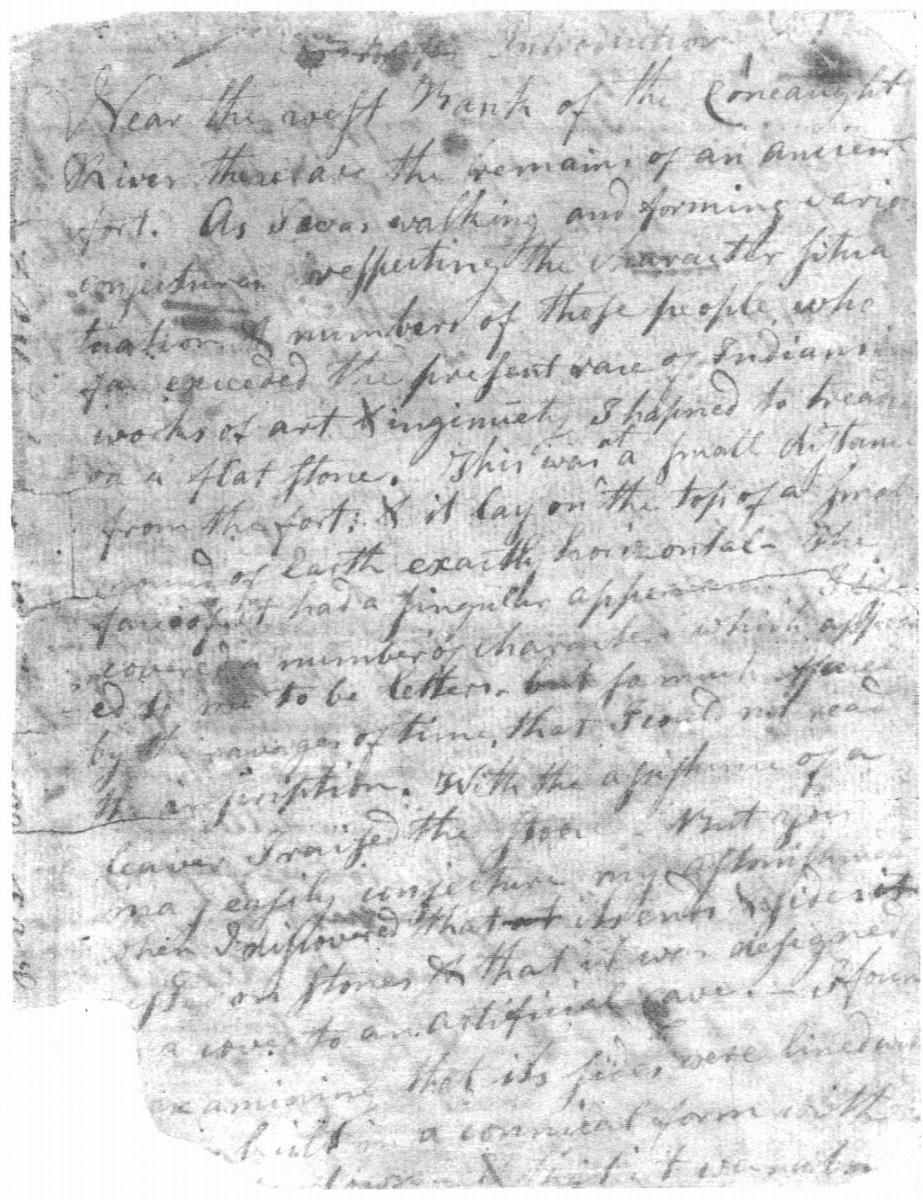 Near the west Bank of the Coneaught River there are the remains of an ancient fort. As I was walking and forming vario[us] conjectures respecting the character situatuation & numbers of those people, who far exceeded the present race of Indians in works of art & inginuety I hapned to tread on a flat stone. This was <at> a small distance from the fort; & it lay on the top of a smal[l] mound of Earth exactly horizontal— The face of it had a singular appearance. I discovered a number of characters which appeared to me to be letters—but so much effaced by the ravages of time, that I could not read the inscription. With the assistance of a leaver I raised the stone— But you may easily conjecture my astonishmen[t] when I discovered that at its ends & sides it [r]ested on stones & that it was designed [—] a cover to an artificial Cave.— I found [—] examining that its sides were lined with [—] built in a connical form with [—] down—& that it was abou[t] [p. 2] [ejight feet deep— Determined to investigate extra design of this extraordinary work of antiquity—I prepared myself with necesary requisites for that purpose & decended to th[e] Bottom of the Cave— Observing one side to be built <perpendicular> nearly three feet from the bottom, I began to inspect that part with accuracy; Here I noticed a big fla[tj stone fixed in the form of a doar, I imm[e]diatly tore it down & Lo a cavity wit[h]in the wall presented itself—it being about three feet in diamiter from side to side & about two feet high Within this cavity I found an earthan Box with a Box <cover> which shut it perfect[ly] tite— The Box was two feet in length one & half in breadth & one & three inche[s] in diameter. My mind filled with awful sensations which crowded fast upon me would hardly permit my hands to remove this venerable deposit, but curiosity soon gained the assendan[ ] the box was taken & raised to open [—] When I had removed the Cover I f[ound] that it contained twenty eig[ht —] of parchment. & that when [— —] [p. 3] appeared to be manuscrips written in eligant hand with Roman Letters & in the Latin Language.

They were written on a variety of Subjects. But the Roll whic[h] principally attracted <my attention> contained a history of the authors life & that part of America which extends along the gr<e>at Lakes & the waters of the Mississppy.

Gentle Reader, tread lightly on the ashes of the venerable dead—Thou must know that this Country was <once> inhabited by great & powerful nations. [C]onsiderably civilized—& skilled in the arts [—]ts of war, & that on ground wher thou 1—] treadest many an hard fou a bloody [p. 4] Battle hath been faught & heroes by thousand have been made to bite the dust.

In the history given of these natains by my Auther you will find nothing but what will correspond with the natural sentiments we should form on viewing the innumerable remains of Antiquity which arc scattered over an extensive Country. This is an evidence of the authors impartiality & veracity.—But if any should pretend that the whole story is fictitious or fabulous,

To publish a translation of every particular circumstance mentioned by our author would produce a volume too expensive for the general class of readers. But should <this> attempt to throw off the vail which has seculded our view from the tranactions of nations who for ages have been extinct, meet the approbation of the public, I shall then be happy to gratify the more inquisitive & learned part of my readers by a more minute publication. Apprehensive, that sceptical, illiberal or supersticious minds may cen[su]re this performance with great accrimo[ny,| I have only to remark that they will b[e deprived of a great fund of entertainment [—] [p. 5] of a contrary disposition, will obtain My compassion will be excited more than my resentment & there the contest will end.

Now Gentle Reader, the Translator who wishes well to thy present & thy future existence entreats <thee> to peruse this volume with a clear head a pure heart & a candid mind— If thou shalt then find that thy head & thy heart are both improved it will afford him more satisfaction than the approbation of ten thousand who have received no benifit.— —