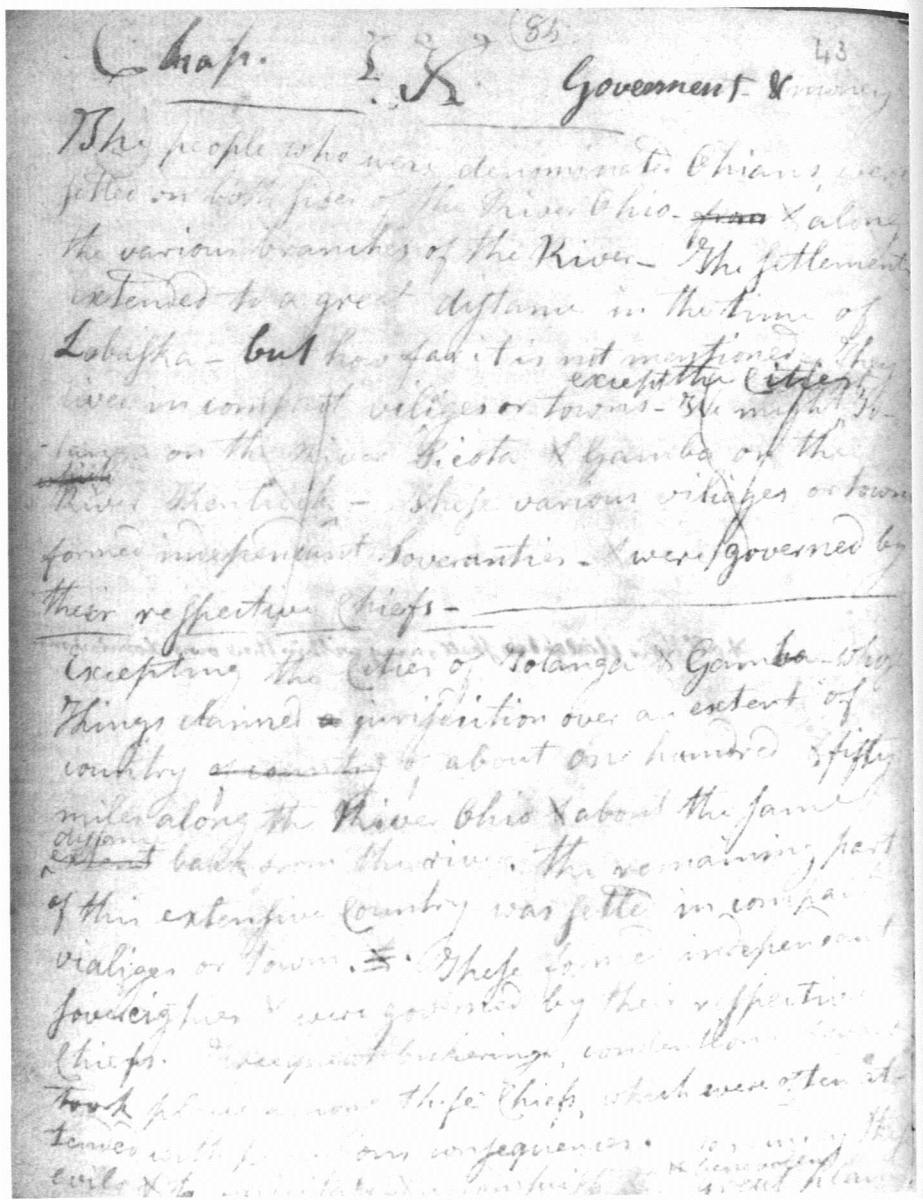 The people who were denominated Ohians, were setled on both sides of the River Ohio—from & along the various branches of the River— The setlements extended to a great distance in the time of Lobaska— but how far it is not mentioned— They lived in compact vili<a>ges or towns—We might <except the Cities.> Golanga on the River Sciota & Gamba on the River Kentuck <which>— These various viliages or towns formed independant Soverantics—& were governed by their respective Chiefs—

Excepting the Cities of Golanga & Gamba—whose Kings claimed a jurisdiction over an extent of country of country of about one hundred & fifty miles along the River Ohio & about the same extent <distance> back from the river, the remaining part of this extensive Country was setled in compact vialiges or towns, &. These formed independant sovereigties & were governed by their respective Chiefs. Freequent bickerings, contentions & wars took place among these Chiefs, which were often attended with pernicious consequences. To remidy these evils & to facilitate & accomplish the great <& benevolent> plan [p. 86] of reforming & civilizing the Ohians, Lobaska had formed a sytem of Government, with a design of establing two great empires—one on each side of the River Ohio.— Their different constitutions were on the <same> plan—& were presented by the hand of Lobaska to the respective kings of Sciota & Kentuck—

The Sciotan Constitution was comprised in these words. The Country east of the great River Ohio shall form the Empire of Sciota— At the head of this empire shall be placed with the title of Emperor— Labamack the oldest son of Lobaska— The office shall be hereditary in the eldest male of his family— He & his sons successively shall mary natives of the kingdomdom of sciota.—<& all their daughters shall mary within their own dominions.> He shall have four counsellors— He with the advice of his Councellors shall have the exclusive right of making war & peace <& of foming treaties with other nations>— He shall be the commander in chief of all the forces & the King of Sciota shall be next to him= All controversies betwen the Rulers or Chiefs of the differant tribes shall be refered to the dessicion of him & his Councellors— & he is autorized to compel a compliance— He shall hold his settings anually in four differant parts of the empire. The king of Sciota & the chiefs of the different tribes shall hold their offices & exercise the same authority in civil matters that they have done— They shall [p. 87] be ameniable to the emperor & his councellors, whose duty it shall be to enquire into all complaints against them from their subjects & to redress grievances & punish for oppressions & injustice <by fines>.— He <and his Councellors> shall have the excusive priviledge of coining money— They may likewise lay taxes for the support of goverment & for the defence of the nation.— They shall coin no more money than what is necessary for the convenience of the people & in such quantity only that the value shall not depreciate—<In time of war <he» shall appoint the officers of his army—except where the chiefs chuse to to command their own subjects—in that case they shall be subject to the comand of the emperor> The people in evry City, town or village shall respectively chuse one or more Censors— whose duty it shall be to enquire into all mal-conduct of Rulers—& all vicious & improper conduct of the preists & the people—& they shall pursue such measures to obtain justice & to produce a reformation of morals in the offendors as the laws shall direct.

In order that the priests <& instructors of learning> may know & perfom their duty for the benefit of civilization, morality & religion, Lambon the third son of Labaska shall preside over them & shall have the title of high Priest— & the office shall be hereditary in the eldest males of his family successively—There shall be associated with him four priests as his assistants—- they shall exercise a jurisdiction over all the priests of the empire & shall see that they <faithfully> per<form> the duties of their office—They shall attend to the instructors of Learning—& shall direct that a suitable number are provided thro,out the empire— It shall likewise be their duty at all suitable times & places to instruct Rulers & people in the duties of their respective [p. 88] stations—& to labour incessantly to persuade mankind to restrain subject their passions & appetites under the goverment of Reason—that they may secure happiness to themselvs in this life—& immortal happiness beyond the grave.— The people shall make contributions, in proportion to their wealth for the support of their priests— If any refuse, they shall be denied the priviledge of their instructions & shall be subjected to the ridecule & contempt of the people.—

For the convenience of the people & for the easy support of the goverment, it is necessary that there goverment shou should be something to which shall represent property—& which is of small weight. It is therefore provided that certain small peices of Iron— stamped in a peculiar manner, shall be this circulating medium, to represent property— Each peice according to its particular stamp shall have a certain value fixed upon it.— It shall be the peculiar prerogative of the Emperor & his councellors to direct the coining of these peices—which shall be denominated money— No more money shall be coined than what will be for the benefit of the empire— Nor shall the Emperor or his Counsellors receive any more of it, than an adequate compensation for their services.— They shall keep an account of the amount of money coined anually & the [p. 89] manner in which it has been distributed & expended This account shall be submitted to the examination of the King of Siota & the chiefs of the empire. The Emperor shall always be ready to receive the petitions & complaints of his subjects— He shall consult the welfare of his people & save them from oppression & tyranny—& by his beneficent acts shall gain their affection & obtain <the appalation> of a just, a good & gracious Prince.—

When Hadocam king of Sciota had received this plan of goverment, he immediatly assembled all the Chiefs or princes within his kingdom Lobaska pointed out the defects of the existing goverments, & the excellencies of that form which he presented for their acceptance— His reasons could not be resisted— they unanimously agreed to establish it as their constitution of Goverment. Labamack accepted the office of Emperor, & his four counsellors were appointed— Lambon was ordained High priest & his four assistance chosen— The new goverment was now put in opperation— The various tribes, living contiguous to the empire seeing its prosperity [p. 90] sollicited the priviledge of being received as parts of the empire— Their requests were granted. Improvment & prosperity attended them— This induced other contiguous Tribes to request the same priviledge—& others still adjoning them came forward with their petitions, all were granted & the same regulations established in every part— Within about three years from the first establishment of the empire Lobaska had the pleasure of seeing his Son reign over a teritory of more than four hundred miles in length along the River Ohio— & of beholding a nation rapidly progressing from a state of barbarism, ignorance & wretchedness to a state of civilization knowledge & prosperity—

Having now beheld the happy success of his experiment at Sciota, Lobaska made a second viset to Bambo king of Kentuck. His second Son whose name was Hamback was present at the city of Gamba, at [p. 91] His youngest son Kalo attended him. He made known his plan of revolution to Bambo who cordially acquiessed— & calling together his princes—they unanimosly agreed to place Hamback on the throne of the empire south of the Ohio River— & to ordain Kalo as their high priest— With the exception of names & places the Constitution of goverment was the same as that which the Sciotans adopted— The same measures were pursued to ensure it sucess.— A great & flourishing empire arose— & barbarous tribes connecting themselvs with the empire & under the fostering care of the goverment became civilized wealty & prosperous.—

Thus within the term of Twelve years from the arival of Lobaska at Talanga—he had the satisfaction of beholding the great & benevolent objects which he had in view accomplished— He still continued his useful Labours—& was the great Oricle of both Empires— His advise <& sentiments> were taken upon all important subjects— & no one ventured to controvert his opinions— He lived to behold the suscesful experiment of <his> institutions—& to see them acquire that strength & firmness as <not> easily to be overthrown.

[p. 92] Having acquired that renown & glory which are beyound the reach of envy & which aspiring ambition would dispair of attaining— at the age of Eighty, he bid an affectionate adue to two Empires & left them to lament in tears his exit.

These two empires continued to progress in their improvments <& population> & to rival each other in prosperity during the reign of Ten successive Emperors on the Throne of Sciota— Peace & harmony and a friendly intercourse existed betwen them— No wars took place to disturb their tranquility except what arose from the surrounding Savages, who sometimes disturbed the frontiers in a hostile <manner> for the sake of gaining plunder. But these attacks were generally repelled & defeated without much loss of blood— They were in fact of such trifling consequence as to make no perceptible impediment to prevent the population, improvments & prosperity of both Empires— & happy, thrice happy would it have been for them if they had still continued to have pursued the amicable & benevolent princciples, which first marked the commencment <&> progress of their institutions.