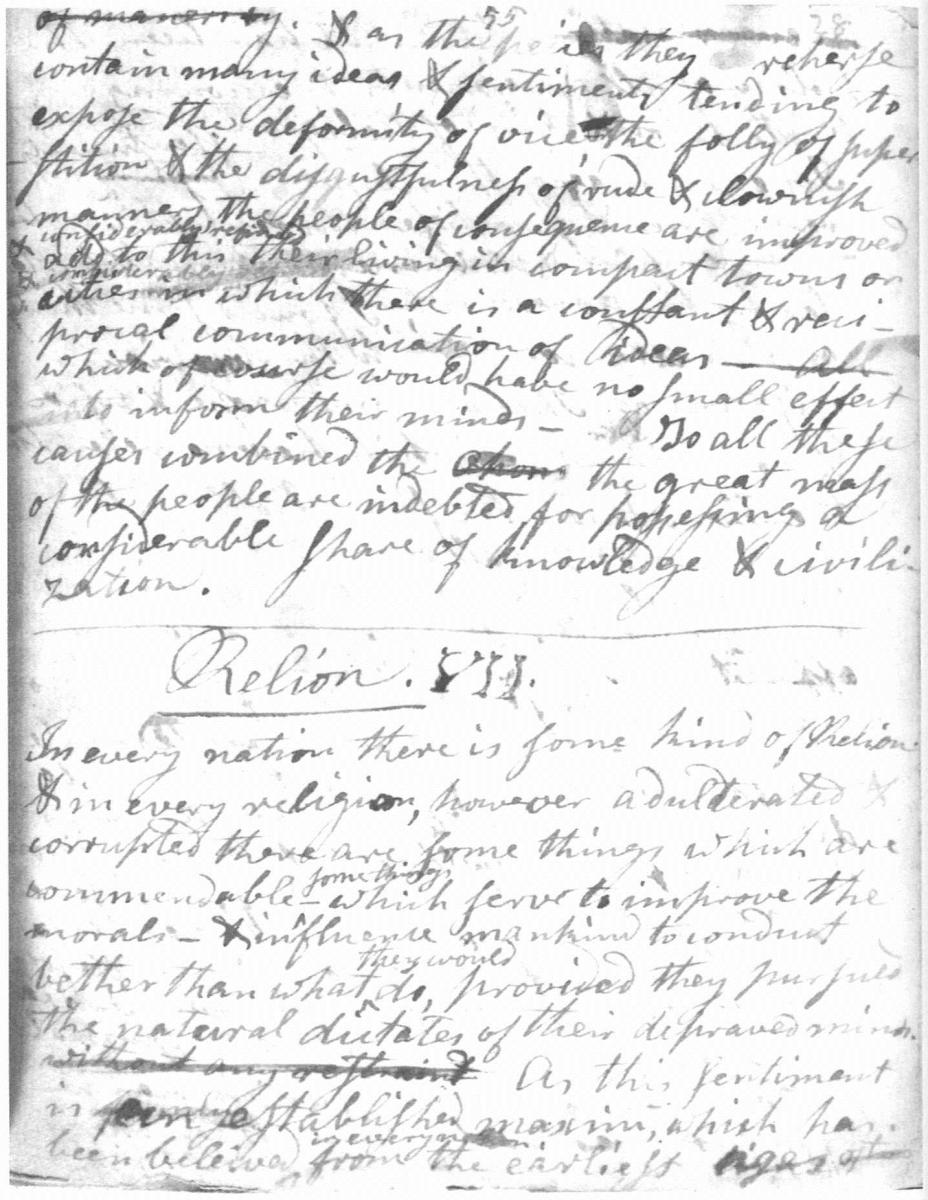 In every nation there is some kind of Relion & in every religion, however adulterated & corrupted there are some things which are commendable—<some things>which serve to improve the morals—& influence mankind to conduct better than what <they would> do, provided they pursued the natural dictates of their depraved minds, without any restraint As this sentiment is an [1] established maxim, which has been beleived <in every nation.> from the earliest ages of tim[e] [p. 56] in every nation, hence it has been the policy of all goverments to encourage & protect some kind of Religion.

In examining the religious sistem <precepts & sentiments> which are beleived & practised thro’out this extensive empire & which are encouraged & protected by the goverment,—I found some things which are common to the various [2] sistems of Theology in Europe & Asia & some things which have [3] no resemblance to either. From the sacred Roll as it is denominated I shall extract the tenets of their Theology & a description of their religious Cerimonies. It expresses them to this effect. “There is an inteligent omnipotent Being, who is self existant & infinitely good & benevolent—Matter eternally existed—He put forth his hand & formed it into such bodies as he pleased—He presides over the universe & has a perfect knowledge of all things—From his own spiritual substance he formed seven sons—These are his principal agents to manage the affairs of his empire—He formed the bodies of men from Matter—Into each body he emitted <infused> a particle of his own spiritual substance, in consequence of which man in his first formation was inclined to benevolence & goodness. There is also another great inteligent [p. 57] Being who is self existent & possessed of great power but not of Omnipotence—He is filled with infinite malice against the good Being & exerts all his subtlety & pow[er] to ruin his works—Seeing the happy situation of man he approched so near as to tuch his soul with his deliterious hand—The poison was immediately defused & contaminated his passions & appetites—His reason & understanding received no injury—. The good being looking upon his unhappy ofspring with infinite love & compassion made a decree that if mankind would reduce their passions & appetites under the government of reason he should be enjoy blessings in this world & be compleatly happy after death—as his soul quits his body Death desolvs the connection—Etherial Bodies are prepared for the souls of the righteous—These bodies can pass thro’ any part of the universe & are invisible to mortal eyes. Their place of residence is on a great & City vast plain which is beautified with magnificent Buildings—with Trees fruits, & flowers Here they enjoy every delight, which No immagination can paint the delights, the felicity of the Righteous. But the wicked have no cthcria are denied etherial bodies—Their Souls naked & incapable of seeing light, dwel in darkness & are tormented with the keenest anguish—Ages roll away & the good being has compassion upon [p. 58] them—He permits them to take possession of etherial bodies & they arise quik to the abodes of delight & glory: Now O man, attend to thy duty & thou shalt escape the portion of the wicked & enjoy the delights of the righteous Avoid all acts of cruelty to man & beast. <No Crime is so horrid as maliciously to destroy the life of man.> [4] defraud not thy neighbour, nor suffer thy hands secretly to convey his property from him—Preserve thy body from the contamination <of> lust—& remember that the seduction <of thy neigbours wife> would be a great Crime.—

Let thy Citizens be numbered once in two years—& if the young women, who are fit for mariage are more numerous than the young men—then we<a>lthy men, who are young & who have but one wife, shall have the priviledge, with the permission of <the> King to marry anothe<r> until the numbers of the single young men & the single young woman are made equal—But he who hath two wives shall have a house provided for each—& he shall spend his time equally with each one.—

Be grateful for all favours & forsake not thy friend in adversity. Treat with kindness & reverence thy Parents—Forsake them not in old age, nor let their cheeks be furrowed with tears for the want of bread.—Bow down thy head before the aged, treat thy superiors [p. 59] with respect—& place thy rulers & thy teachers in the most honourable seat. Let Rulers consult the welfare of the people & not agrandize themselvs by oppression & base bribes—Let Religious Teachers walk in the Road which leads to celestial happiness & lead the people after them—Let Parents restrain the vices of their children & instruct their minds in useful knowledge—Contention & strife is is the Bane of Families & the destruction of domestic happiness—being yoked together the husband & wife ought to draw in the same direction—their countenances will then appear beautified <shine> with the effulgent Beams of Friendship & love—peace & harmony will attend their habitation & their affairs will prosper.

Hold out the hand of kindness & friendship to thy n<ea>ighbour—consider him when reduced to indgence & distress—he is as dear to the great & good being as what thou art—& now thou hast an opportunity to manifest the disposition of thy heart—<To afford him releif will be pleasing to thy maker & an> expression of thy gratituge Envious & malicious Souls are almost incurably contaminated with that hellish poison which which was first disordered the soul of man—[p. 60] partake not of their guilt by joining them in the malignant work of slander & detraction. Their intended mischief returns upon their own heads & the slandered character of the innocent & just shines forth with encreasing lusture. Let the stranger find an hospitable resting place under thy Roof—give <him> to eat [—] <from> thy portion, that whe<n> he departs he may bless <the> & go on his way rejoicing.—

Industry will Say not to thyself I will indulge inactivity & idleness & lie upon the bed of sloth & slumber away the precious moments of time—for in this thou art unwise—for unwise disease will attend, <thee> hunger will torment thee—& Rags will be thy clothing—Let industry & econemy fill up the measure of thy waking moments, so shall thy countenance display health & sprightliness plenty shall suply the wants of thy family & thy reputation shall be respectable.

But I behold a being in human form, from whom I turn away with disgust & abhorrance. He is covered with so much dirt & filth, that no etherial body is provided for him nor can he be received into the abodes of the blessed.

[p. 61] Sufer not thy bodies or thy garments to remain long bismered with dirt & filth—Cleanliness prevents many deceases & is pleasant to the sight But from a dirty filthy mortal we turn with disgust & abhorrance

As the great author of being <our existence> is benevolent to all his ofspring so it becomes us to be benevolent to our fellow beings around us—Our country is one Body & we are part of its members—We are therefore bound to maintain the rights & priviledges & the the honour & dignity of our Country at the Risk of our lives—Great rewards attend the Brave—& <their> expploits & atcheivments in contending against tyrants & in defending the Rights their of their country will be celebrated on the plains of glory.—

[p. 62] But the vision now expands & directs our contemplation to fix on his attributes, whose spiritual substance is commensurate with infinity—As only a single particle from his substance constitutes our souls, how small, how diminitive must we appear in the view of Onniicence—We must therefore contemplate his attributes thro the medium of his works—& admire with profound reverance & adoration his wisdom goodness & power which are visible in the formation & arangement of all materiall bodies & spiritual beings.

He requires us to suplicate his favours—& when received to express our gratitude—As our passions & appetites often get the assendence of reason—-we are [p. 63] therefore bound to confess our faults & implore forgivness—

Now that you may <know &> keep all these things which were made known by divine inspiration, it is ordained that <on evry eighth day> ye lay asside all unnecessary labour—that ye meet in convenient numbers & form assemblies That in eah assembly a learned holy man shall preside, who shall lead your devotions & explain this sacred Roll & give you such instruction as shall promote your happiness in this life & in the life to <to come> Once in three months—ye shall hold a great festival in every <City> & town & your priests shall sacrifice an Elk as a token that your sins deserve punishment—but that the divine Mercy has banished them into shades of forgetfulness.—

Be attentive O man to the words of truth which have been recorded & [p. 64] & pay respect to all the commandments which have been written for your observance—Your maker will then be pleased to see you rejoice in the participation of his favours & to behold your faces brighten with the cheering <benign> beams of cheerfulness.—

[2] The word “various” is written over “differant.”

[4] This insertion is written vertically on the left margin of the page. Its location here is noted by an asterisk in the text.