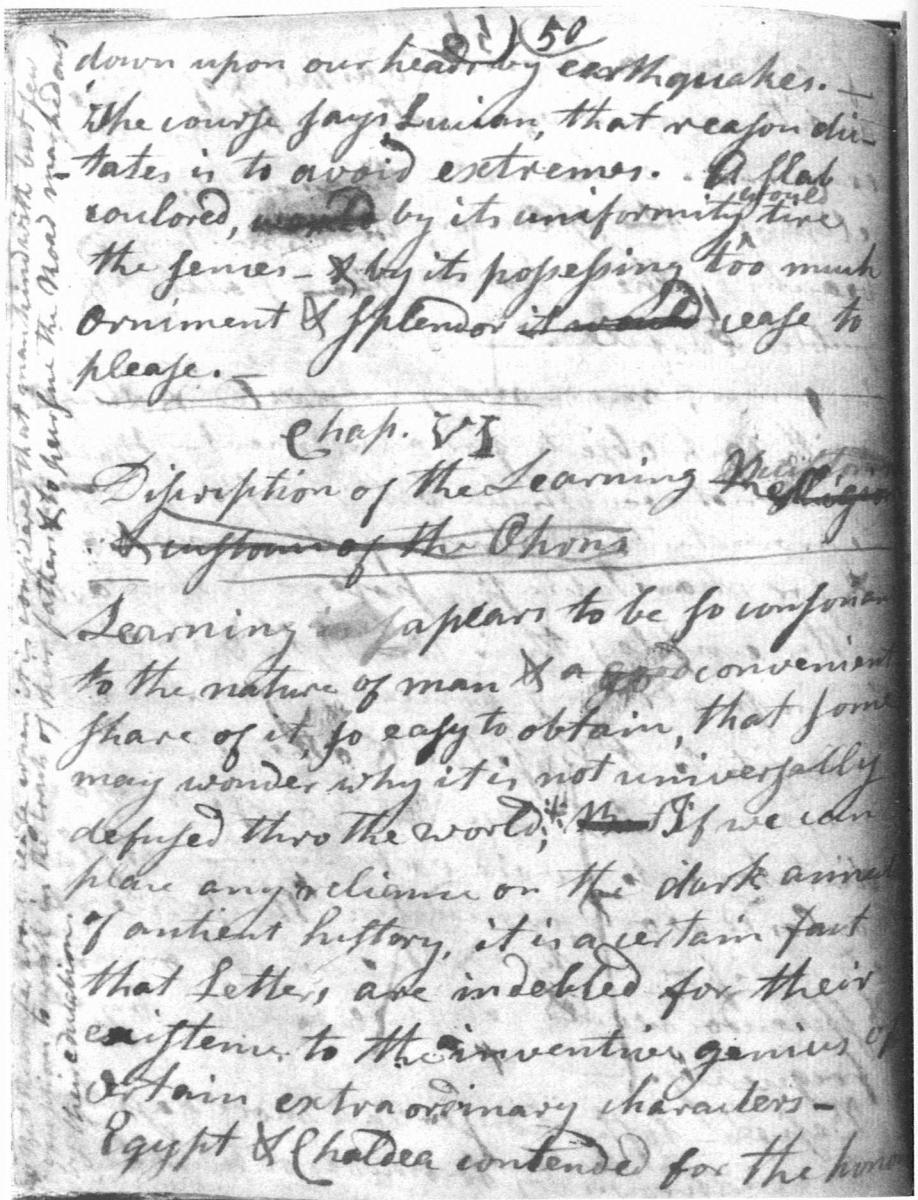 Learning [2] apears to be so consonant to the nature of man & a good convenient share of it, so easy to obtain, that some may wonder why it is not universally defused thro the world, <But the wonder would cease when it is considered that mankind with but few exceptions to walk in the track of their fathers & to pursue the Road marked out by their education.> [3] But If we can place any reliance on the dark annals of antient history, it is a certain fact that Letters are indebted for their existence to the inventive genius of certain extra ordinary characters—

Egypt & Chaldea contended for the honour [p. 51] of being the first who invented letters—Perhaps they were invented in each nation nearly at the same <time> <Tho the most probable conjecture is that they were communicated from one nation to the other.> [4]—But let this be as it may—could no other nation in the world produce as great geniusses as Egypt or Chaldea? Is there any natural obsticle to prevent their production in America as well as in Asia?—Whatever may be the reasonings of some—on this subject, the fact is, that I found Letters or some share of Learning, tho’ in a very imperfect state, among this people—At present I shall wave the account of its introduction & shall merely discribe the state of learning as it <existed> among the Ohons They had chacters which represent words—& all compound words were had each part represented by ats <apropriate> character. The variation of cases moods & tences was designated by certain marks placed under the Character. They generally wrote on parchment—& begining at the right wrote from the top to the bottom, plac<i>ng [p. 52] each character directly under the preceding one—& having finished one colum or line they begin the write the next on the left of that & so continue on until they cover the parchment if the subject require it.

In their principal Cities & towns the Goverment appoint learned men to instru[ct] the sons of the higher class of Citizens & in the course of four or five years they will make such proficiency as to become tolerable schollars.—

The works of the learned are not very voluminous. Records are kept of the transactions of their goverments. Their constitutions & laws are committed to writing—A sacred Roll in manuscript is preserved among the Records [p. 53] of their Emperors & kings, & are dispersed thro the impire—& much pains is taken to defuse the knowledge of them among the people—In all their large towns & Cities they have deposited under the <care> of a priest a sacred Roll which contains the tenets of their Theology & a discription of their religious cerimonies. This order of men publish comments upon these sacred writings—they publish some tracks on moral philosophy—& some wise containing a collection of proverbs & the wise sayings of their sages.—

But the kind of composition in which they most excell is poetry—In poetic numbers they describe the great events, which take place—& the exploits & mighty atcheivmts of their heroes—In soft eligies they describe <paint> the Amours of Lovers [6] & in pathetic strains they delineate the calamimities & sorrows of the unfortunate.

In their Assemblies it is very common for a certain class of their Learned to entertain the company by with a repit[o]ir [p. 54] of poetic peices describing the battles & exploits of their warriors—or to sing some amorous or witty ballad—As for Theators they have none—but as a kind of substitute—there are actors, who entertain the people by pronounsing dialogues or plays, in which they display all the arts of mimicry—& act out the express in their countenance, their gesture & the tone of their voices the differant passions of the human mind

As only a small proportion of the people are instructed in <the> arts of reading & writing, of consequen the great mass, must possess a large share of ignorance—but not so great a share as savages who have no learning among them—They hear the conversation & the letures of their sages—they <they are entertained with> Their poetic oritors entertain & them with the productions of their poets, containing the history of great events & mighty atcheivments—Their Actors divert & please them by exciting the various passions—at the same time comunicating instruction & correcting the natural savageness [p. 55] of maners by. & as the peices they reherse contain many ideas & sentiments tending to expose the deformity of vice, & the folly of superstition & the disgustfulness of rude & clownish manners, the people of consequence are improved <& considerably refined> add to this their living in compact towns or [7] cities in which there is a constant & reciprocal communication of ideas All which of course would have no small effect into inform their minds—To all these causes combined the Ohons the great mass of the people are indebted for possessing a considerable share of knowledge & civilization.

[1] The word “Relligion” is written over the previously erased “& customs.”

[2] After the word “learning,” the letters “is s” have been erased.

[3] This insertion is written vertically on the left margin of the page. Its location here is noted by a “:+:” sign in the text.

[4] This insertion is written at the bottom of the page. Its location here is noted by a “+” sign in the text.

[6] After the word “Lovers” there is a notation “:+:” which indicates another line written at the bottom of the page for insertion here. The words are illegible.

[7] The words “& considerably refined” have been inserted and erased here.