A discription of the Ohons, & manner of procuring a living 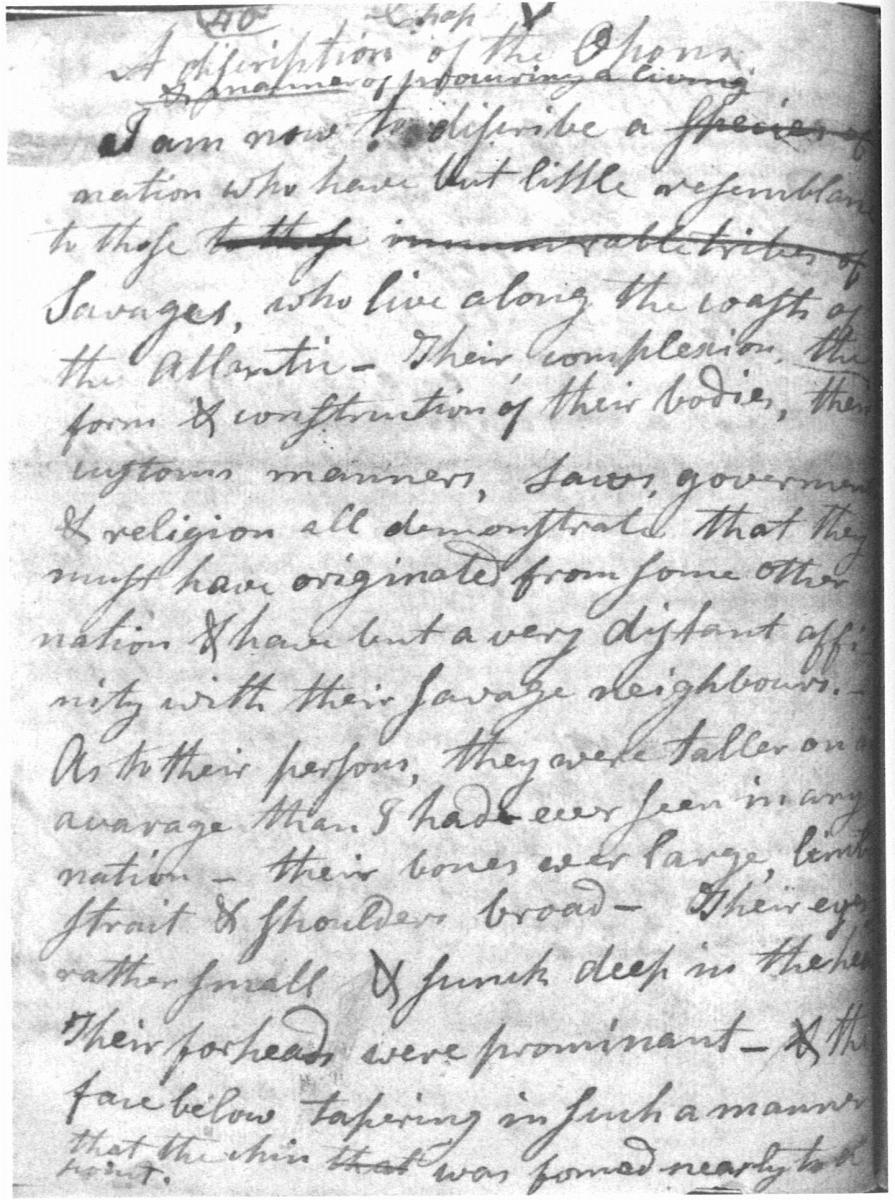 I am now to discribe a species of nation who have but little resemblane to those to those innumerable tribes of Savages, who live along the coasts of the Atlantic—Their, complexion, the form & construction of their bodies, their customs manners, Laws, government & religion all demonstrate that they must have originated from some other nation & have but a very distant affinity with their savage neighbours.—

As to their persons, they were taller on an avarage than I hade ever seen in any nation—their bones wer large, limbs strait & shoulders broad—Their eyes rather small & sunck deep in the head Their forheads were prominant—& the face below tapering in such a manner that the chin that was formed nearly to a point, [p. 41] As to their complexion, it was bord<er>ing on an olive tho of a lighter shade—Their eyes were generally of a dark brown or black Their hair of the same coular, tho I have sometimes <seen> persons,—whose hair was of a redish hue.—

They cloathed themselvs in cloath <which w[as]> manufactured among themselvs from the hair of the Mammoons & from Cotton which was transported from the south west westward. They <men> wore shoes & long stockings,—wide trouses—a waistcoat & a garment with wide short sleaves which came down to their nees & in cold weather a Cloak over the whole The covering for the head was generaly a kind of a Cap which ran up high—& tapered to a point—This was generally made of fur skins & was ornimented with feathers. It had a small brim in the shape of an half moon to project over the forehead—[p. 42] The women beside a stockings & shoes wore a short petecoat, a shirt of Cotton a loose garment with sleavs which they girted round them with belts—& a cloack—They had various orniments such as ribbons made from cotton & coulared with different coulars—the most beautiful feathers that could be obtained & shells of various kinds—Indeed the higher class of women were extremely fond of ornament—& were placed a large share of their happiness in the briliancy [1] & gaudy appearance of their garments. They <people> obtained their living generally by by the cultivation of the Land—& the manage by tending & managing certain Animals, which <had> been so long domesticated that they <had> lost their wild nature & become tame.

Corn, wheat, beans & squashes <& carrots> they raised in great abundance—The ground was plowed [p. 43] by horses & generally made very mellow for the reception of the seed.—

It was the occupation of a certain part of the men to tend upon the tame Amimals to drive them to pasture & keep them from straying & feed them when the snow was on the ground.—Two men would tend twenty Mammouth, which were indifferent whether they fed on grass or cropt the bushes—<when these animals were fat, their flesh was higly esteemed>—They had droves of Elk, which they had so tamed <& tutored> that they could manage <them> as they pleased—these had They tenders—whould [———————] <& they would> follow them like a flock of sheep—& it was but seldom that any would left [2] their companions—The elk constituted a considerable part of their animal food—The horses were managed in the same way—& the people tho’t their meat to be a savory dish.

[p. 44] They had large numbers of turkies & gees—which, tho’ originally wild, yet by treating them with great familiarity by cropping their wings & feeding them they frequently they discovered no disposition to ramble off—but would propogated their species & laid [3] eggs in abundance.— Hunting & fishing were the employments of some—others followed the mechanical business & Others carried on a bartering trade to the southwesward—in order to furnish to furnish the people with cotton & other aticles whose production was not conginial to their climate.

[p. . . .5] The manufactureng of Iron & lead was understood but was not carried on to that extent & perfection as in Europe A small quantity of Iron in proportion to the number of Inhabitants served to supply them with all the impliments which custom had made necessary for their use—By hammering & hardening their Iron they would convert it nearly into the consistence of Steal—& fit it for the purpose of edge tools.

The potery Business was conducted with great inginuity, & great quantities of stone & earthan ware consisting of every kind of vessels of every construction which were needed for family use, were manufactured in evry part of this extensive country. They would These vessels they [p. . . .6] they ornimented with pictures with the likenesses of various kinds of animals & trees—& impressed upon them such coulors as would strike the fancy with delight.—The females of the higher Class most welthy Class would often have a large & superfluous quantity of this brittle furniture to decorate one apartment of the house—The vessels they arranged in such order as to make a display of taste & impress the mind with the agreeable sensation of beauty.—

In Architecture there can be no comparison with the civilized nations of Europe—In their most welthy & popolous Cities they their houses & public buildings, exhibit no eligance—no appearans of wealth & grandure—all is plain—& [p. . . .7] nothing supurfluous—But convenience appears to be the whole object they had in view <in> the construction of their buildings of evry kind. Their houses were generally but one story <high>—built of wood, being framed & covered with split clapboards or shingles & in the inside the walls were formed of clay, which was plastered over with a thin coat of lime—

Their houses seldom consisted of more than three appartments As to their chimnies, they built <construt> a wall of stone about five feet hight for the fire to be against wich they build their fire—from the top of this wall they construct their chimney with thin peices of split timber, on the inside with wet dirt or clay—of which they plaister wet dirt or clay—which compleatly covers & adheres to the timber & prevents the [p. . . .8] fire from having any operation upon it. The inside of their houses, as the women generally practise neetness makes a much better appearance than the outside.

It is my opinion, says Trojanus that this people display a taste in building which is formed upon the true principles of Reason—Their houses are sufficiently spacious for convenience No expence or Labour are thrown away in building useless apartments—or in erecting their houses higher than what convenience requires = The whole catalogue of ornimental trumpery is neglected—This in Roam produces more than half the Labour & expence in building—Yes says Lucian—& without this, these labouring people must starve for th want of employment.—&-f—] the citizens of the Roman empire would be deprived of the honour [p. . . .9] <of> of possessing a splendid Capital & of the exquisite pleasure of beholding the greatest exhibition of human inginuity in the eligance, the splendor, the simitry & beauty of their houses, their palices & public Edifices.—True indeed, replies Trojanus, men may be dazled & delighted with such objects for a moment—But could not wealth be better bestowed upon to promote the intrest of the community & for charitable purposes—& these artists better employ their strength & inginuity in producing some substantial benefits to themselvs & others.—

Rejoins Lucian, the course reason dictates is to avoid ex tremes. A slab coulored world would tire the sences by its uniformity & too much orniment & splendor would cease to please

Besides—lofty houses can more easily be overthrown by tornadoes or tumbled [p. 50] down upon our heads by earthquakes.—

The course says Lucian, that reason dictates is to avoid extremes. A slab coulored, would its uniformity <would> tire the sences—& by its possessing too much Orniment & splendor it would cease to please.—