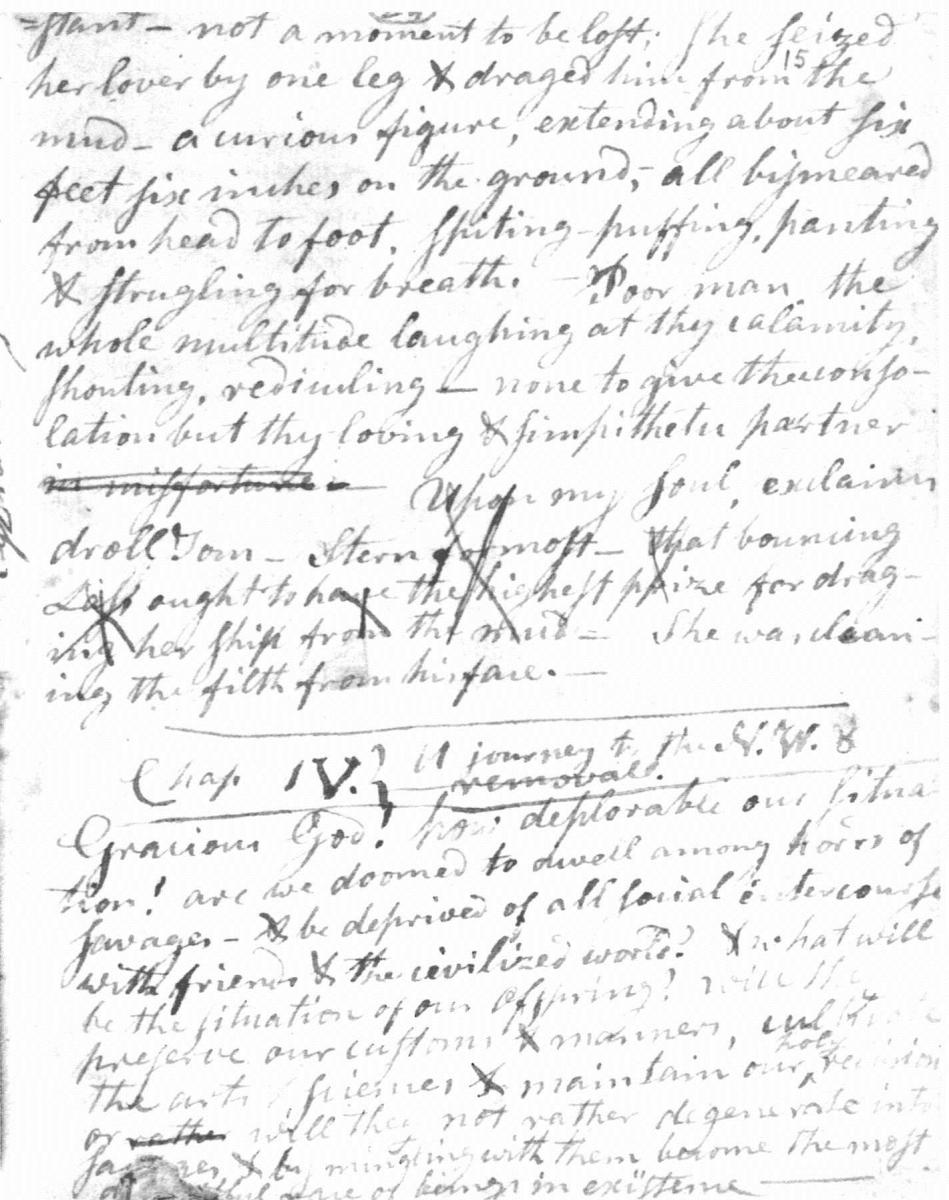 Gracious God! how deplorable our situation! are we doomed to dwell among hords of savages—& be deprived of all social intercourse with friends & the civilized world? & what will be the situation of our ofspring? will they preserve our customs & manners, cultivate the arts & sciences & maintain our <holy> religion; or rather will they not rather degenerate into sa[va]ges & by mingling with them become the most a[wfJul race of beings in existence—

[p. 30] Who can indurer such reflections, such heart-rending anticipations?— They pour upon my soul like a flood & bear me down with the weigt of a milstone. O that my head were waters & my eyes a fountain of tears—then my intolerable burthen should should be poured forth in a torrent & my soul set at liberty. But behold the light springs up & beams upon my soul, She brings in her train Hope—that celestial Godes, that sure & strong anchor—that dispencer of comfort & pleasing anticipation—& that dispeller of coroding grief & black dispair—

She bids me review the exploded reasing of of a great philosopher & compair it with my own observations—perhaps the result will point out a safe road to the land of our nativity.

Thus I reasoned respecting the solar system of which the earth is a part. Provided the earth is stationary, according to the present system of philosophy— then the sun, the moon & the plannets, being at <an> immence distance & from the earth—must perform their revolutions round her with inconceivable velocity— whereas, if according to the P<l>atonic <other> system, the earth is a globe— & the sun is stas[ion]ary then the earth by a moderate velocity —] [p. 31] perform her revolutions— This scheme will represent the solar Sytem as displaying the trancend<ant> wisdom of its almighty Architect—for in this, we behold the Sun suspended by omnipotence & all the planents moving round him as their common center in exact [or]der & harmony— In this we can easily account for days & nights & the different seasons of the year,— When the earth presents one part of her face to the sun it <is day>— when that part is turned from his beams it <is> night— when she varies to the south the sun shines upon us in a more perpendicular direction—the sun beams become more dence & the heat encreases—as she returns back the heat decreases in proportion as this <part of> earth looses its perpendicular assent <direction> to the sun & the cold becomes more intence in the same proportion. This accounts for the various seasons of the year, appears correct & consistent & highly honourable to the divine perfections.

But behold the other system—The Earth firmly fixed on a firm foundation—perhaps as as somc some say on a giants back who stands on a prodigious Rock—Its surfice widely cxtcnd[s—n]early horizontal— & its cut down [p. 32] & <its> sides cut down strait or perpendicular to the the very bottom—below which is a fathomless abiss. Pray Mr Philosopher, what man was ever there <&> looked down? & what prevents the Ocean, unless it is damd with earth & rocks from pouring down & loosing itself in this horrible Abiss?— But how extensive is this tcraqueous surface? Indeed I am of opinion, if this sytem is true I am nearly at one end of it. But the hipothises is too absurd & inconsistent. The earth must be of a spherical form & a westerly [—] will lead us to the land of our nativity—Perhaps this is a part of the eastern Continent, or perhap only a narrow strip of the Ocean intervenes? On no other principle can we account for the emigration of the ancestors of those innumerable hords of human beings that possess this continant—their tradition is that their ancestors came from the west—& they agree in their information that at the distance of fifteen days jorney in a westerly direction, there arc nations vastly more numerous, powerful & civilized than th[e]mselvs.

[p. 33] The earth therefore must be of a spherical form <a Globe> and a westerly course will lead us to the land of our nativity. On what principle can we account for for the emigration of the ancestors of those innumerable hords of human beings that possess this Continant? Their tradition tells them that they emigrated from the wes<t>ward—From this I draw the conclusion—that the sea <if any> which intervenes betwen the two Continants at the westward is not so extensive, but that it may <be> safely <[—]>navigated. I have <also> learnt from some of the <we are also informed by some of the> natives, that at the distance of about fifteen days journey in <a> northwesterly course there is a great River which runs in a south westerly direction, they cannot tell how far—& that along the banks of this river there are great towns & mighty <kings> & a people who live in a state of civilization— From all these considerations I am determined to remove—pursue a westerly course & seek the delightful <country> of my ancestors.—

I immediately comuinicated my determination & the reasons on which it was founded to our little Society, who joyfully acquiessed—It was tho't to be the most prudential to find out the disposition] & character of the inhabitants, who were [p. 34] setled along the great River lest we should fall into the hands of Robbers—For this purpose my man Crito & myself & a Delewan for an interpeter set off. We passed thro' a country intersperced with vilages, inhabited by the same kind of people as the Delewans, untill we came to a great mountain. Having passed over this we had not traveled far before we came to the confluence of two great Rivers, which in conjunction produced a river <which was called Owaho> deep enough, for the navigation of ships.—

Here was a large town or city inhabited by a distinct race of people from any we had seen before. We were immediately conducted to the King, wer <& were> received us very graciously—& having asked a number of very pertinent questions & received answers to his satisfaction—I then made known to him our business & had all my requests granted— As we proposed to move into his territory he offered to furnish us, for our convenience with four Mammoons & four men to manage them. These were an Annimal of prodigious magnitude, even biger than the eliphant, which the natives had tamed & domesticated— They were very segacious & docile & were employed in carying burthens & in drawing timber—& in plowing their Land— Their hair at the spring season was ab<o>ut seven inches i[n] length [p. 35] & was of a fine wooly consistence—& being sheared off at the proper season was manufactured into course Cloath—And the milk of the females, whch they produced in abundance, afforded a very wholsome nutriment. Having thus succeedeed beyound our expectation we made as much expidition to return as possible— We arrived in safety without <any> material accidents— The Little Society I had left were greatly rejoised on our returne—& highly pleased with the account we gave of the country we had visited—& at the sight of the extraordinary & prodigious Animals <Mammoons> <whch> we had bro't to convey our baggage.—No time was lost to make preparation for the journey— The Captain, Mate & myself went to the King & held a conference with him & the cleifs & obtained leave to depart, tho with apparent regret & reluctance, [p. 36] Sacks were provided from course Cloth to receive the most valuable part of our goods & furniture—These were thrown across three of the Mammoons— The other was caparisoned, in a manner too tedious to discribe for the accomidation of of our women & childen—They were were all mounted upon him & road with great convenience & safety—Being thus prepared & ready Thus having resided among the Deliwans two years— & being prepared to take our departuree

The king & his chiefs & many of his principal Subjects came forward to take an affectionate farewell. This was done on both ssides, with- with mutual expressions of the most ardent & sincere Frienship & the most earnest wishes & payerer for future prosperity & happines[s] [p. 37] Having taken our final adieu I observed honest Crito sheding tears very plentifully— You seem to be affected said I— God bless your honour said, he, when I think how kind & generous these poor Delewans have been to us I cannot help feeling an affection & friendship for them—

We were obliged to anchor amonst them—we were strangers—& helpless & they were ignorant Savages— yet they held out the hand of kindness & treated us as brothers & sisters.— Have they not fulfilld the law of christian charity—O that they were good Christians— May God forgive their ignorance & unbeleife—& reward them for their kindness & gerosity.—

We passed on— No obsticles impeded <our journey> until we came to the great River suscowah—which lies <runs> betwen the Deliwah River & the great moun [p. 38] mountain—The water being too deep for fording, we built a small boat and at with this, at several times we conveyed the whole of the <baggage &> Company <& baggage> across, except the manager of the Mammoons, who mounted them & forded & swam <them> across— We then proceeded on by slow marches, [—]—

But in crossing the great mountain we had some difficulties to encounter but hower met with receivd no material damage— but <finally> arived safely at the great city Owhahon on the twenty fifth day after our departure from Deliwan.—

Fatigued with a long & difficult journey, great joy & gladness were visible in evry in Countenance, & all were disposed to establish our residence here until further information could be obtained & further measures concerted to prossecute our journey to Europe [p. 39] The King & his principal Officers proffered us evry assistance necessary to make our situation agreable.—They assigned us in conformity to our wishes, <compliance with our requst> a number of houses on the bank of the river at a little distance from the City— We made him some valuabl presents in return, which he received as a token of friendship—but not as a compensation— For such was the high sence of honour which this prince sustained, that when he made <a> present, he would take it as an insult to offer him any thing as a compensation.—

Having now once more become setled our little community continued the same regulations which they had established at Deliwan—& all things proceeded in peace & our affairs prospered.—