Many particulars respecting the Natives 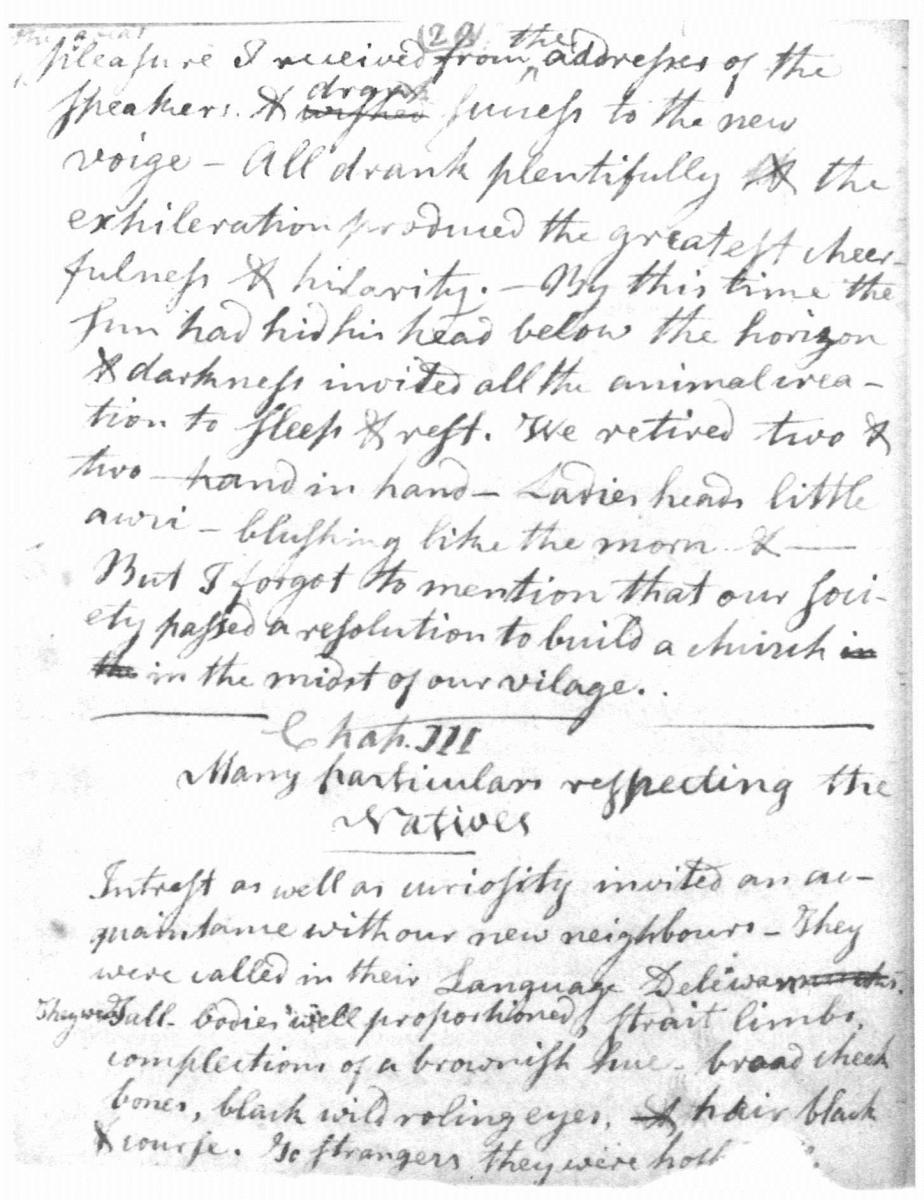 Intrest as well as curiosity invited an acquaintance with our new neighbours—They were called in their Language Deliwannueks. [1] They were Tall—bodies well proportioned, strait limbs, complections of a brownish hue—broad cheek bones, black wild roling eyes, & hair black & course. To strangers they were hosp[itab]le [p. 21]—true to their engagements, ardent in their friendship, but to enimies inconsolable, implacable cruel & barbarous in the extremes—Innumerable hords of this disscription of people were scattered over an extinsi<ve> country, who gained their living <by> hunting the Elk, the dear & a great variety of other wild animals—by fishing & fowling & by raising corn, beans & squashes.—Shooting the arrow slinging stones, wrestling, jumping, hoping & runing were the[ir] principal amusements—& prizes would often be staked as a reward to the conqueror.—Their cloathing consisted of Skins dressed with the hair on—but in warm weather, only the middle part of their bodies were incumbered with any covering—The one half of the head <of the men> was shaved & painted with red—& the one half of the face was painted with black.

The head was adorned with feathers of various kinds—& their ears & noses were adorned ornimented with rings formed frormed from the sinues of certain animals, on which were suspended smoth stones of different coulars.

[p. 22] They held festivals at stated <times>, which varied in the manner of conducting them, according the object they had in view—At one of their annual festivals their cerrimonies were p<ec>uliarly singular & different from any that werever practised by any nation—Here a description would give us some idea of their religion & would gratify the curiosity of an ingenious mind.

When the <time> arives—which is in September, The who whole tribe assemble—They are <dressed &> ornimented in the higest fashion—The women in particular have their garments & heads so adorned with feathers shells & wampum that they make a very brilliant & groesque appearance.

They form a Circle—their countinances are solemn. A Speaker mounts a stage in the midst. At this moment two Black Dogs led by two Boys—& two White Dogs led by two young da[mjsels enter the circle and are tied [—]es [p. 2 . . .] The speaker then extended his hands & spoke Hail ye favorite children of the great & good Spirit, who resides in the sun, who is the father of all living creatures & whose arms incircle us all around—who defends us from the malicious designs of that gr<e>at malignant Spirit that pours upon us all the evils we endure he gives us all our meat & our fish—& causes the corn & the fruits to spring up & makes us to rejoice in his goodness. He hath prepared a delightful country to receive us—if we are valiant in battle or are benevalant & good—There we can pick all kinds of delicous fruit & have game & fish in abundance & our women being improved in beuty & sprighliness will cause our hearts to dance with delight—But wo unto you wicked, malicious, mischevous mortals—your lot will be cast in a dark, dreary, miry Swamp—where the malignant spirit will torment you with musquetoes & serpents & will give you nothing to eat but toads, frogs & snails.—[p. 24] But O my dear friends—all hail—here is a custom which is sanctioned by time immemorial—Look steadfastly on the black dogs & let not your eyes be turned away—when they are thrown on the sacred pile & the flames are furiously consuming their bodies—then let your earnest prayers assend for pardon & your transgressions will flee away like they shadows & your sins will be carried by the smoke into the shades of Oblivion—When this solemn expiatory sacrifice <is ended> then prepare your souls to partake of the holy festival—Each one will receive a precious morsel from these immaculate snow coulered Dogs in token that your offences have all evaporated in the smoke of the holy sacrifice, & that you are thankful to bim <the benevolant Sperit> for the abundance of good things that you enjoy—& that you humbly anticipate the continuance of his blessings & that he will defend you against the evill designs of that malignant spirit, who gives us gawl & wormwood, & fills our bosoms with pain & our eyes with tears.

[p. 25] He then proclaimed, let the sacred pile be erected & the solemn sacrifice performed. Instantly about one hundred men came forward with small dry wood & bundles of dry sticks & having thrown them in one pile within the circle they sat the pile on fire—The black dogs were kocked on the middle, head & thrown on the top—in a moment all was in a blaze & the flame assended in curls to heaven. The whole company assumed the most devout attitude & muttered in sounds almost inarticulate their humble confessions & ernest requests—

When the dogs were consumed & the fire nearly extinguished, the cerimonies of their sacred festival began—the white dogs which were very plump & fat, were knocked on the head & their throats cut. Their hair was then <singed> off, having first their entrails taken out—& being suspended by the nose before a hot fire they were soon roasted—thrown upon a long Table & disected into as ma<n>y peices as there were persons to swallow them—The company <immediately> formed a procession, one rank of men, the other of women—the <men> marching to the left & the women to the right of the Table each one t[ook] a peice & devoured it with as good a [—] as if it had been the most delicious morsel, [p. 26] Having compleated these sacred cerimonies with great solemnity—the whole company formed themselvs into a compact circle round the stage—ten musitians immediately mounted & facing <the multitude> on every side sang a song—The tune & the musical voices of the singers <pleased the ear>, whilst the immagination was delighed with the poetic inginuity of the composition—The multitude all joined in the chorus, with voice so loud & multifarious that the atmosphere quaked with terror—& the woods and neighbouring hills sent back by way of mockery—sent back their vociferation <the sound of their voices> improved by tenfold confusion. Perhaps, reader, you have the curiosity to hear the Song—I can give you only the last stanzy & the chorus.—

‘For us the sun emits his rais

‘The moon shines forth for our delight

‘And warriors flee before our sight.

The solemnities are ended & in their opinion their poor souls are compleatly whitewashed—& every stain entirely effaced.—A littl[e di]version [p. 27] will now dissipate the solemnity & inspire them with cheerfulness & meriment.

The whole tribe repair to the top of an hill, at one place their is a gradual slope a small <distance> & then it decends about twenty five feet in an almost perpendicular direction, at the bottom of which is a quagmire, which is about ten feet in length & the soft mud is about three feet deep—at each end the ground is soft but not miry—Down this declevity twenty pair of very suple & sprigtly goung men & women are to decend, If by their agility & de<x>terity they escape the quagmire,—a peice of wampum will be the reward of each [3] fortunate champion—but if they plunge in, their recompence will be the ridecule & laughter of the multitude—

In making this decent, six young women & five young men by a surprizing dexterity in whirling their bodies as they dcended cleared themselvs from the quagmire—The rest as their turns came plunged in & came out most wofully muded to the great diversion of the Spectators. The incident which excited the most meriment hapned when the last pa[ir] decended. by an unlucky spring to [p. 28] clear himself from the quagmire he brot his body along side of the declevity & roled his whole length into the midst of the quagmire where he lay his whole length in an horizontal position on his back neither heels up or head up, but horizontally—soft & easy—but alas when one unlucky event happens another follows close on the heal.—the fair, plump corpulant Damsel, his affectionate sweetheart came instantly, sliding with great velocity—she saw the woful position of her beloved—she wished <him> no harm—she raised her feet this bro’t the center of gravity directly over the center of his head—here she rested a moment—his head sunk—she sunk after him his heels kicked against the wind like Jeshuran waked fat—but not a word from his lips—but his ideas came in quick succession—tho’t he, what a disgrace to die here in the mud under the pressure of my sweet heart—however his time for such reflections were short—the tender hearted maid collecting all her agility in one effort <dismounted &> found herself on dry land i[n—] in[p. 29]stant—not a moment to be lost; she seized her lover by one leg & draged him from the mud—a curious figure, extending about six feet six inches on the ground,—all bismeared from head to foot, spiting—puffing, panting & strugling for breath.—Poor man, the whole multitude laughing at thy calamity, shouting, rediculing—none to give thee consolation but thy loving & simpithetic partner in misfortune—

Upon my soul, exclaims droll Tom Stern formost—that bouncing Lass ought to have the highest prize for draging her ship from the mud—She was cleaning the filth from his face.— [4]