An account of the settlement of the ships Company—& many particulars respecting the Natives. 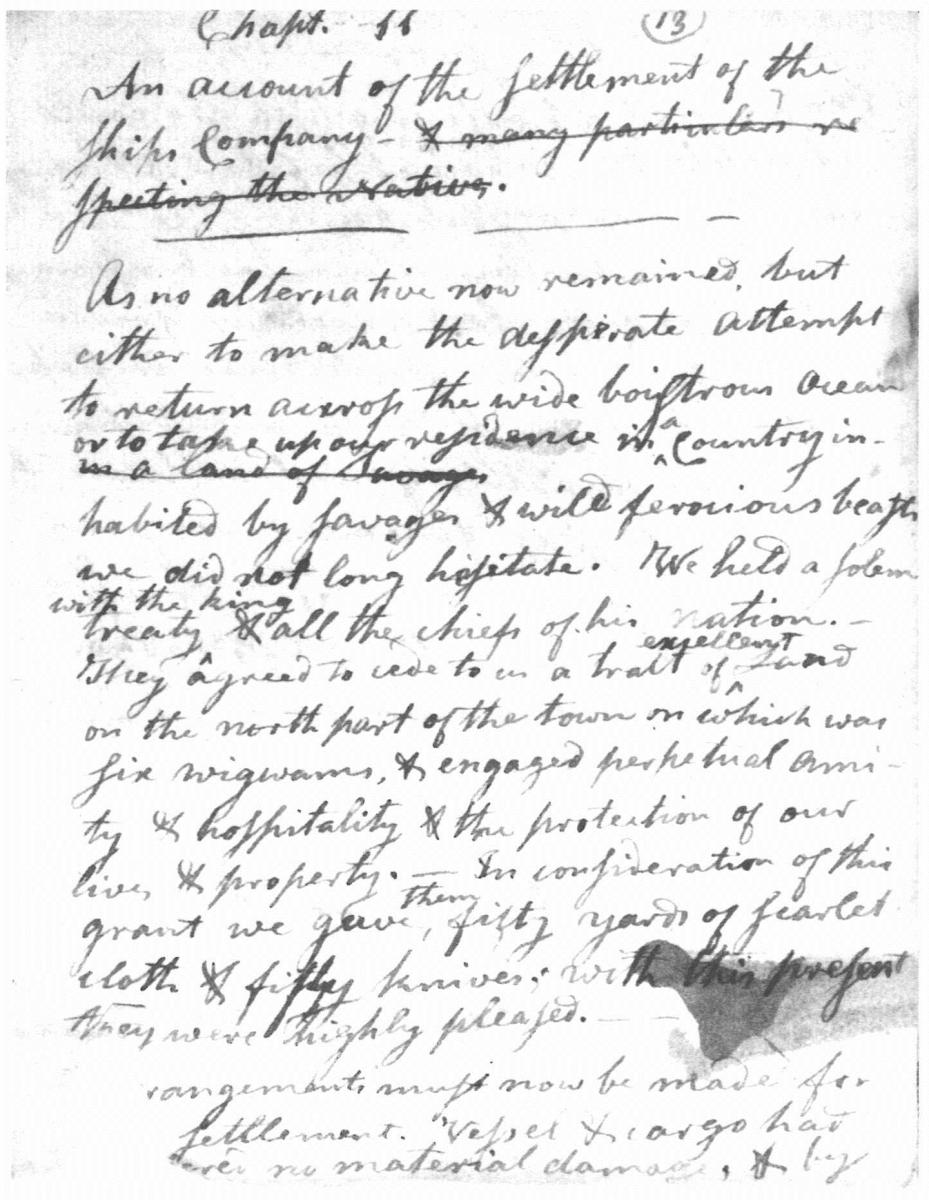 As no alternative now remained, but either to make the desperate attempt to return accross the wide boistrous Ocean or to take up our residence in <a> Country in<in a land of Savagcs>habited by savages & wild ferocious beasts we did not long hesitate. We held a solem treaty <with the king> & all the chiefs of his nation.—They agreed to cede to us a tract of <excellent> Land on the north part of the town on which was six wigwams, & engaged perpetual amity & hospitality & the protection of our lives & property.—In consideration of this grant we gave <them> fifty yards of scarlet cloth & fifty knives; with this present they were highly pleased.——

[Ar]rangements must now be made for [—] settlement. Vessel & cargo had [suff]ered no material damage, & by [p. 14] striping the vessel of its plank we could erect a house in which we could deposite the whole <cargo> in safety—All hands were immediatly employed some in procuring timber, which was hued on two sides & then locked together, some in procuring shingles & some in striping the vessel of its plank; & having a large quantity of nails on board, in ten days we finished a very convenient storehouse, sufficiently spacious to receive the whole Cargo. We also built a small house adjoining which was to be the habitation of the Captain & myself—Having secured all our property we then found it necessary to establish some regulations for the goverment of our little society.—

The Captain whose [1] name was Lucian, & myself were appointed judges in [a]ll matters of controversy & manages of [f th]e public property, to make bargain[s wi]th [p. 15] the natives & barter succh articles as we did not need for necessaries.—As we all professed The next thing to be done was to to beleive in the religion of Jesus Christ we unanimously chose Trojanus the mate of the ship, a pious good man, to be our minister to lead our devotions every morning & evening & on the Lords day.—

But now a most singular & delicate subject presented itself for consideration. Seven young women we had on board, as passenjers, to viset certain friends they had in Brittain—Three of them were ladies of rank, & the rest were healthy bucksom Lasses.—Whilst deliberating on this subject a mariner arose whem we called droll Tom—Hark ye shipmates says he, Whilst tossed on the foming billows what brave son of neptune had any more regard for a woman than a sturgeon, but now we are all safely anchored on Terra firma—our sails furled & ship keeled up, I have a huge longing [—somje of those <rosy> dames—But willing to take [p. 16] my chance with my shipmates—I propose that they should make their choise of husbands. The plan was instantly adopted.

As the choie fell on the young women they held a consultation on the subject, & in a short time <made> known the result—Drooll Tom was rewarded for his benevo-<lent> proposal with one of the most sprightly rosy dames in the company.—Three other of the most cheerful resolute mariners were chosen by the other three buxhum Lasses—The three young Ladies of rank fixed their choise on the Captain the Mate & myself. Happy indeed in <my> partner I had formed an high esteem for the excellent qualities of her mind The young Lady who chose me for a partner was possessed of every attractive charm both of body & mind—We united heart & hand with the fairest prospect of enjoying every delight & satisfaction which are attendant on the connubial State. Thus ended th[e af]fair. [p. 17] You may well conceive our singular situation. The six poor fellows who were doomed to live in a state of clebicy or accept of savage dames, discovered a little chagrine & anxiety—However they consoled themselvs with the idea of living in families where they could enjoy the company of the fair sex & be releived from the work which belongs to the department of Women.—

Our community might be said to be one family tho we lived in seperate houses, situate near each other—The property was common stock—what was produced by our <Labour> was likewise to be common, All subject to the distribution of the judges, who were to attend to each family & see that propper industry and econim<y> [2] were practised by all.—

The Capt. & myself, attended with our fair Partners & two mariners repaired t[o ou]r new habitation which consisted of [p. 18] two convenient appartments. After having partook of an elligant Dinner & drank a bottle of excellent wine our spirits were exhilarated & the deep gloom which beclowded our minds evaporated. The Capt. assuming his wonted chearfulness made the following address My sweet good sould fellows we have now commenced a new voyge—Not such as bro’t us over mountain billows to this butt end of the world—No, no, our voyge is on dry land—& now we must take care that we have sufficient ballast for the riging—evry hand on board this ship must clasp hands & condecend to each others humour; this will promote good cheer & smoth the [3] raging billows of life.

Surrounded by innumerable hords of human beings, who resemble in manners the Orang Outang—let us keep aloof from from them & not embark in the same matri<monial> ship with them—At the same time we will treat them with good cheer—& inlighten their dark souls with good instruction—By continuing a distinct people & preserving our customs manners, religion & arts and sciences an[o]ther [p. 19] Italy will grow up in this wilderness & we shall be celebrated as the fathers of a great & happy nation.—

May God bless your soul, says one of our mariners, what would you have us do who have had the woful <luck> not to get mates to cheer our <poor> souls & warm our bodies, methinks I could pick out a healthy plum Lass from the copper coulerded tribe that by washing & scrubing her fore & aft & upon the labbord & stabbord sides she would become a wholsome bedfellow—& I think may it please your honour I could gradually pump my notions into her head & make her a good ship mate for the cupboard & as good hearted a christian as any of your white damsels. & upon my Soul—I warrant you if we have children, by feeding <them> with good faire & keeping them clean they will be as plump & and as fair & nearly as white as your honors children.—Upon this I filled the bottle with wine, & observing to honest Crito that <he> was at liberty to make the experiment if he could find a fair [—] to his liking—I then expressed the [p. 20] <the great> pleasure I received from <the> addresses of the speakers & wished <drank> success to the new voige—All drank plentifully & the exhileration produced the greatest cheerfulness & hilarity.—By this time the sun had hid his head below the horizon & darkness invited all the animal creation to sleep & rest. We retired two & two—hand in hand—Ladies heads little awri—blushing like the morn &—But I forgot to mention that our society passed a resolution to build a church in the in the midst of our vilage.

[1] The word “whose” is written over something indecipherable.