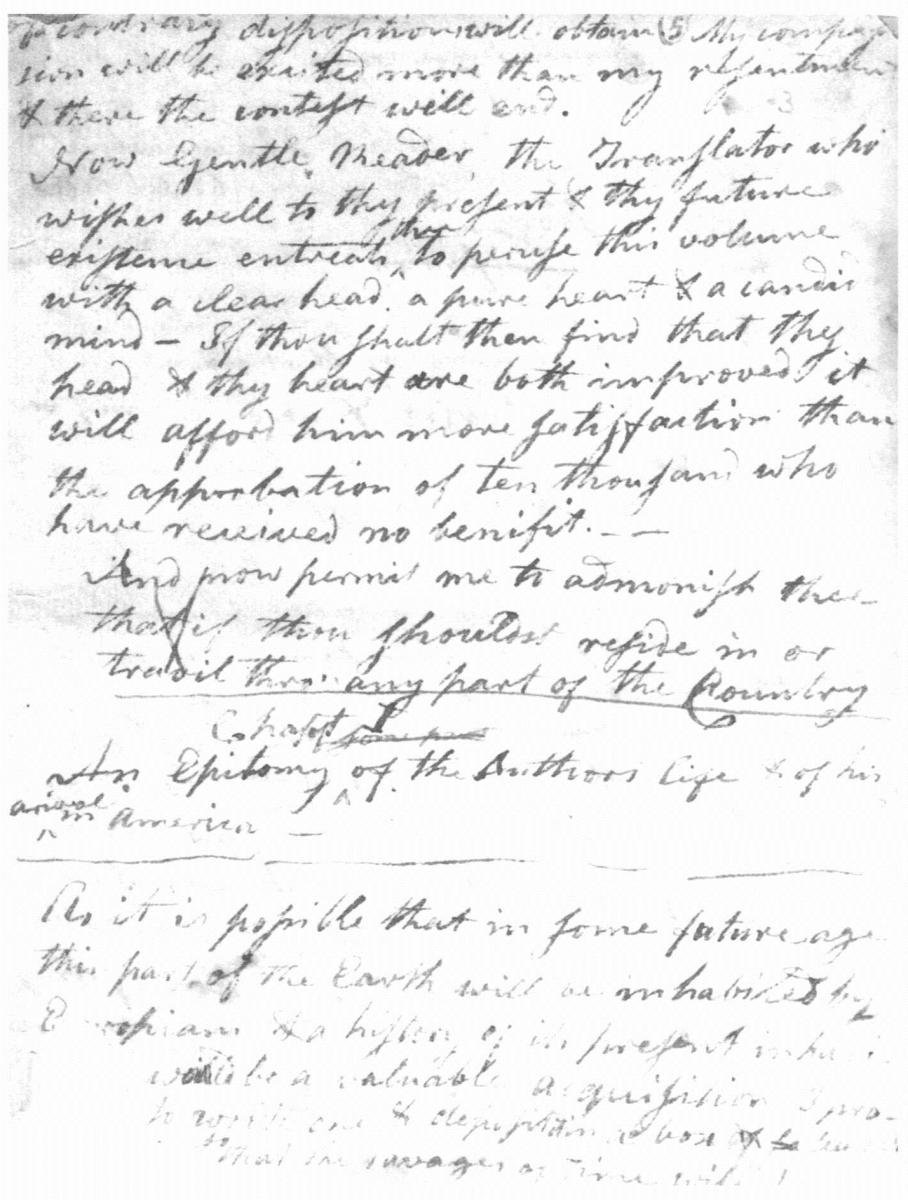 As it is possible that in some future age this part of the Earth will be inhabited by E[ur]opians & a history of its present inhabitants] would be a valuable acquisition I profceed] to write one & deposit it in a box & [1] se secured [——] <so> that the ravages of time will have [p. 6] effect upon it. That you may know <the> Auther I will give a succint account of his life & of the cause of his arival—which I have extracted from a manuscript which will be deposited with this history;

My name was <is> Fabius The family name I sustain is Fabius, being decended from the illustrius General of that name—I was born at Rome & received my tuition education under the tuition of a very Le<a>rned Master—At the time that Constantine arived at that city & had overcome his enimies & was firmly seated on the throne of the Roman empire I was introduced to him <as> a young Gentleman of litera genius & learning and as being worthy of the favourable notice of his <imperial> majesty—He gave me <the> appointment of one of his s<e>critaries, & such were the gracious intimations which he freequently gave me of his high approbation of my conduct that I was happy in my st[ati]ons

Preparation was made instantly & we sailed—The vessel laden with provisions for the Army—Cloathing, knives & other impliments for their use had now ariv[ed] near the coasts of Britain when a trem[en]dous storm arose & drove us into the mid[st] of the boundless Ocean. Soon the whole Crew became lost & bewildered—They knew not the direction for <to> the rising Sun or polar Star—for the heavens were covered with clouds; & darkness had spread her sable mantle over the face of the raging deep. Their minds were filled with consternation & dispair—& unanim<o>usly agreed that What could we do? How be extrecated from the insatiable jaws of a watry tomb. Then it is was that we felt our Absolute dependence on that Almighty & gracious Being who holds the winds & storms in [—] hands—From him alone could we ex[pect] deliverance. To him our most fer[vent] desires assended—prostrate & on [p. 8] bended nees we poured forth incessan[t] Supplication, & even Old Ocean appeared to sympathize in our distress by returning the eccho of our vociforos Cries & lamentations—After being driven five days with incridable velocity before the furious <wind>, the storm abated in its violance—but still the strong wind blew strong in the strong <as I now beleive> in the same direction Doubtful whether the wind had not changed her point we gave the ship full sail & let <her> drive—On the sixth day after, the storm wholly subsided, the sun rose clear & the heavens once more appeard to smile—Inexpressible was the consternation of all the crew, they found themselvs in the midst of a vast Ocean. No prospect of returning—All was lost—The wind blowing westwardly & the presumption was that it had been blowing in that direction during the whole of the storm. No pen can paint the dolorious cries & lamentations of the poor mariners, for the loss of friefnds, f]or the loss of every thing they held most [—.] At length a Mariner stept [—] [p. 9] the midst & proclaimed. Attend O friends & listen to my words—A voice from on high hath penetrated my soul & the inspiration of the Almighty hath bid me proclaim—Let your sails be wide spread & the gentle winds will soon waft you into a safe

harbor—A Country where you will find hospitality.—

Quick as the lightnings flash joy sparkled in every countenance—A Hymn of Thanksgiving spontanioully bust forth from their lips—In full confidence that the divine prediction would be accomplished they extoled the loving-kindness & tender mercies of their God & promised, by the assistance of his grace to make ample return of gratitude.

On the fifth day after this we came [in] sight of Land—we entered a spaious [riv]er—& continued sailing up the [—] many leagues until we came [p. 10] in view of a Town—Every heart now palpitated with joy—& loud shouts of gladness expressed the inthusiastic transports of our souls. We anchored within a small distance <from> shore—Immediatly the natives ran with apparent signs of surprize & astonishment, to the bank of the River—After veiwing us for some time, & receiving signs of Friendship—they appeard—to hold a counsel for a few minutes—Their King then stept forward to the edge of the bank—& proffered us the hand of friendship—& by significant gestures invited us to Land promising us protection & hospitality. We now found ourselvs once more on terra firma—& were conducted by the King & four cheifs into the town whilst the multitude followed after, shouting & performing many odd jesticulations—The King ordered an entertainment to be prepared f[or] his new friends which consisted of [ ] fish, boild beans & samp—[ ] [p. 11] The whole was placed under a wide spreading Oak in wooden dishes—a large clam shell & a stone Knife were provided for each one The king then came forward with about twenty of his principal subjects—& eon seated us, (being twenty in number) & seated us by the side of our repast—He & his company then took seats in front.

After waving his hand & bowing all fell to eating & a more delicious repast we never enjoyed—The repast being finished our attention was called to a collection of about One thousand men & women <who> had formed a ring and invited our company to come forward into the midst—After gazing upon us for some time with surpizes we were permited to withdraw & to take our stand in the Ring—About forty in number then walked into the midle of <the> Ring & began a song [wi]th such a discordant & hedious modifications of sounds & such frantic jeticulations [—b]ody, that it seemed that chaos had brot [p. 12] her furies to set the world in an uproar—And an uproar it was in a short time for the whole company fell to dancing, shouting, whooping, & screaming at entervals—then dancing, jumping, & tumbling with many indisdiscrible distortions in their <countenance> & indelicate jestures—In fact they appeared more like a company of devils than human Beings. This lasted about one hour—They <then> took their places in a circle & at a signal given gave three most tremendous whoops; theey then instantly dispersed, playing ma[n]y antike capers & making such a confused medly of sound by sk<r>eaming, whooping screaching like owls, Barking like dogs & wolvs & bellowing <croaking> like Bull frogs, that my brains seemed to be turned topseturvy—& for some time I could scarce beleive that they belongd to the hum[an] species.