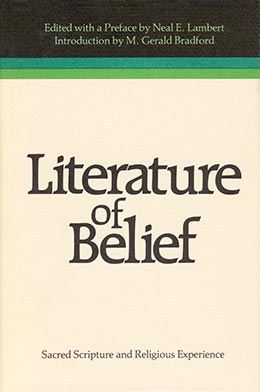 As a people who derive their identity from a sacred book, Mormons have a natural interest in religious texts and narratives. Indeed, they are in a significant way a “people of the book,” for the Book of Mormon as a religious text is both a keystone of the Latter-day Saint church and an expression of the deepest matters of faith for each member. Along with that book the often-told story of Joseph Smith’s 1820 theophany in the woods of upstate New York has become a sacred narrative of the highest significance as it both identifies and narrates the beginnings of this new religious tradition. This interest in religious expression is of course at least as inclusive as it is exclusive. That is why the suggestion of a symposium at Brigham Young University devoted to the literature of belief met with such an immediate and enthusiastic response when it was first proposed almost two years ago.

We knew, of course, that any attempt to be either comprehensive or exhaustive with such a vast subject as religious literature would be foolhardy. From the sutras of Buddhism and the epic tales of the Bhagavad Gita to the ancient creation narratives of Moses and the modern warnings of approaching apocalypse, the array of forms and modes and subject matters of religious literature both written and spoken make the whole field infinitely vast and complex. So we knew to begin with that any symposium could offer only tantalizing bits and pieces at best. But the idea itself was so appealing that we could not resist making an attempt. We were fortunate in this regard in being able to have the support of two important organizations on campus, the Center for International and Area Studies and the Religious Studies Center. Drawing on the impressive backgrounds of our own colleagues in these centers, we were able to bring together their combined resources in a remarkable effort of mutual support and unselfish cooperation quite unusual even for a college campus. With this support we were able to invite scholars from within the borders of our own country and others from halfway around the world as participants in the conference.

As the acceptances began to come back, we could tell that our highest hopes for the symposium were being realized. Not only would the topics be exciting and varied, but the speakers would, without question, be some of the most significant scholarly voices of our time.

When sessions got under way that Thursday and Friday, March 7–8, 1979, the enthusiastic reaction of the audiences demonstrated that the symposium was everything we had hoped for. From the exotic and stimulating presentation of Joseph Campbell, through the dance-like lecture of Wing-tsit Chan, to the enchanting narratives of the charismatic P. Lai, the different sections of the symposium presented us all with a varied and unusually appealing intellectual feast.

But if good luck and good management of car pools, room assignments, and microphones can make a good symposium, far more is needed to make a good book. While we had hoped all along to be able to publish the proceedings of the symposium, we recognized as the program went on that we had before us an array of presentational modes that fit the symposium format splendidly, but were less easily set down in cold print.

It was at this point that we received unusual help, not just from the symposium participants themselves in shaping their manuscripts, but from two remarkable and capable people, Lavina Fielding Anderson and M. Gerald Bradford. Lavina has helped us not only with the preparation of the copy for the book itself, she has helped find appropriate manuscripts to cover some of the obvious gaps which the symposium itself, because of the limits of time, had simply to acknowledge and pass over. Gerald, out of his own scholarly background and sense of friendship to BYU, stayed with us throughout this whole project as advisor, editor, and as an essential guide, steering those of us less knowledgeable away from the pitfalls of our own ignorance. If errors persist, they are ours, not his. Anyone who reads the introduction which follows will sense the contributions that Gerald has made to this volume.

Many others deserve thanks as well: A. Terry Schiefer, JoAnn Allen, Cloma E. Callahan, Lillian M. Osborne, and my colleagues in the Center for International and Area Studies who were the originators and organizers of many of the sessions where these materials were first presented. I especially want to acknowledge the substantial assistance given to the symposium and this volume by the World Religions area of the Religious Studies Center and by the general director of the Center, Ellis T. Rasmussen. Dean Rasmussen has been impressively patient and supportive as the effort to get these pages prepared has moved slowly along since the original symposium in the spring of 1979. His unflagging interest kept alive a project that, given the difficulty, may have otherwise quietly expired.

Finally, no one knows more than those of us who have worked on it how eclectic, even fragmented, this collection of papers may seem. However, like a collection of fine crystals, each piece casts a particular hue that considered along with the others creates for the observer a rich and pleasing experience. Seeing each of these pieces in the context of the rest will, we believe, be a rewarding experience.