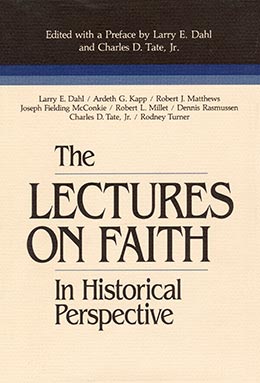 1. In our former lectures we treated the being, character, perfections, and attributes of God. What we mean by perfections is the perfections which belong to all the attributes of his nature. We shall, in this lecture, speak of the Godhead: we mean the Father, Son, and Holy Spirit.

2. There are two personages who constitute the great, matchless, governing, and supreme power over all things, by whom all things were created and made, whether visible or invisible, whether in heaven, on earth, in the earth, under the earth, or throughout the immensity of space. They are the Father and the Son: the Father being a personage of spirit, glory, and power, possessing all perfection and fulness. The Son, who was in the bosom of the Father, is a personage of tabernacle, made or fashioned like unto man, being in the form and likeness of man, or rather man was formed after his likeness and in his image. He is also the express image and likeness of the personage of the Father, possessing all the fulness of the Father, or the same fulness with the Father; being begotten of him, and ordained from before the foundation of the world to be a propitiation for the sins of all those who should believe on his name. He is called the Son because of the flesh. And he descended in suffering below that which man can suffer; or, in other words, he suffered greater sufferings and was exposed to more powerful contradictions than any man can be. But notwithstanding all this, he kept the law of God and remained without sin, showing thereby that it is in the power of man to keep the law and remain also without sin. And also that by him a righteous judgment might come upon all flesh, that all who walk not in the law of God may justly be condemned by the law and have no excuse for their sins. He, being the Only Begotten of the Father, full of grace and truth, and having overcome, received a fulness of the glory of the Father, possessing the same mind with the Father, which mind is the Holy Spirit that bears record of the Father and the Son. These three are one; or, in other words, these three constitute the great, matchless, governing, and supreme power over all things, by whom all things were created and made. And these three constitute the Godhead and are one. The Father and the Son possess the same mind, the same wisdom, glory, power, and fullness—filling all in all. The Son, being filled with the fulness of the mind, glory, and power, or in other words, the spirit, glory, and power, of the Father, possesses all knowledge and glory and the same kingdom, and sits at the right hand of power in the express image and likeness of the Father. He is a mediator for man, being filled with the fulness of the mind of the Father, or, in other words, the Spirit of the Father, which Spirit is shed forth upon all who believe on his name and keep his commandments. And all those who keep his commandments shall grow from grace to grace and become heirs of the heavenly kingdom, and joint-heirs with Jesus Christ. They will possess the same mind, being transformed into the same image or likeness, even the express image of him who fills all in all, being filled with the fulness of his glory and becoming one in him, even as the Father, Son, and Holy Spirit are one.

3. From the foregoing account of the Godhead, which is given in his revelations, the Saints have a sure foundation laid for the exercise of faith unto life and salvation through the atonement and mediation of Jesus Christ. By his blood they have a forgiveness of sins and also a sure reward laid up for them in heaven, even that of partaking of the fulness of the Father and the Son through the Spirit. As the Son partakes of the fulness of the Father through the Spirit, so the Saints are, by the same Spirit, to be partakers of the same fulness, to enjoy the same glory. For as the Father and the Son are one, so, in like manner, the Saints are to be one in them, through the love of the Father, the mediation of Jesus Christ, and the gift of the Holy Spirit. They are to be heirs of God and joint-heirs with Jesus Christ.

Questions and Answers for Lecture 5​

Answer—The being, perfections, and attributes of the Deity (Lecture 5: 1).

2. Q—What are we to understand by the perfections of the Deity?

A—The perfections which belong to his attributes.

3. Q—How many personages are there in the Godhead?

4. Q—How do you prove that there are two personages in the Godhead?

6. Q—How do you prove that the Father is a personage of glory and of power?

Secondly, of power. “Thine, O Lord, is the greatness, and the power, and the glory” (1 Chr 29: 11). “Ah Lord God! behold, thou hast made the heaven and the earth by thy great power and stretched out arm, and there is nothing too hard for thee” (Jer 32:17). “And because he loved thy fathers, therefore he chose their seed after them, and brought thee out in his sight with his mighty power” (Deut 4:37). “God is my strength and power” (2 Sam 22:33). “He stretcheth out the north over the empty place, and hangeth the earth upon nothing. He bindeth up the waters in his thick clouds; and the cloud is not rent under them. He holdeth back the face of his throne, and spreadeth his cloud upon it. He hath compassed the waters with bounds, until the day and night come to an end. The pillars of heaven tremble and are astonished at his reproof. He divideth the sea with his power, and by his understanding he smiteth through the proud. By his spirit he hath garnished the heavens; his hand hath formed the crooked serpent. Lo, these are parts of his ways: but how little a portion is heard of him? but the thunder of his power who can understand?” (Job 26:7–14).

A—First, he is a personage of tabernacle (Lecture 5:2).

Secondly, and being a personage of tabernacle, the Son was made or fashioned like unto man, or being in the form and likeness of man (Lecture 5:2). “Let this mind be in you, which was also in Christ Jesus: who, being in the form of God, thought it not robbery to be equal with God: but made himself of no reputation, and took upon him the form of a servant, and was made in the likeness of men: and being found in fashion as a man, he humbled himself, and became obedient unto death, even the death of the cross” (Philip 2:5–8). “Forasmuch then as the children are partakers of flesh and blood, he also himself likewise took part of the same. . . . For verily he took not on him the nature of angels; but he took on him the seed of Abraham” (Heb 2: 14, 16).

Thirdly, he is also in the likeness of the personage of the Father (Lecture 5:2). “God, who at sundry times and in divers manners spake in time past unto the fathers by the prophets, hath in these last days spoken unto us by his Son, whom he hath appointed heir of all things, by whom also he made the worlds; who being the brightness of his glory, and the express image of his person” (Heb 1:1–3). Again, “Let this mind be in you, which was also in Christ Jesus: who, being in the form of God, thought it not robbery to be equal with God” (Philip 2:5–6).

9. Q—Was it by the Father and the Son that all things were created and made?

A—It was. “Who is the image of the invisible God, the first born of every creature: for by him were all things created, that are in heaven, and that are in earth, visible and invisible, whether they be thrones, or dominions, or principalities, or powers: all things were created by him, and for him: and he is before all things, and by him all things consist” (Col 1: 15–17). “In the beginning God created the heaven and the earth” (Gen 1:1). “[God]* hath in these last days spoken unto us by his Son, whom he hath appointed heir of all things, by whom also he made the worlds” (Heb 1:2).

10. Q—Does the Son possess the fulness of the Father?

A—Because of the flesh. “That holy thing which shall be born of thee, shall be called the Son of God” (Luke 1:35). “And Jesus when he was baptized, went up straightway out of the water; and John saw, and lo, the heavens were opened unto him, and he [John] saw the Spirit of God descending like a dove and lighting upon Jesus. And la, he heard a voice from heaven, saying, This is my beloved Son, in whom I am well pleased” (JST Matt 3:45–46; see also KJV Matt 3:16–17).

12. Q—Was he ordained of the Father from before the foundation of the world to be a propitiation for the sins of all those who should believe on his name?

A—He was. “Forasmuch as ye know that ye were not redeemed with corruptible things, as silver and gold, from your vain conversation received by tradition from your fathers; but with the precious blood of Christ, as of a lamb without blemish and without spot: who verily was foreordained before the foundation of the world, but was manifest in these last times for you” (1 Peter 1: 18–20).” And all that dwell upon the earth shall worship him [the beast],* whose names are not written in the book of life of the Lamb slain from the foundation of the world” (Rev 13:8). “But we speak the wisdom of God in a mystery, even the hidden wisdom, which God ordained before the world unto our glory” (1 Cor 2:7).

13. Q—Do the Father and the Son possess the same mind?

15. Q—Do the Father, Son, and Holy Spirit constitute the Godhead?

A—They do (Lecture 5:2). Let the student commit this paragraph to memory.

A—They do. “Neither pray I for these [the apostles]** alone, but for them also which shall believe on me through their word; that they all may be one; as thou, Father, art in me, and I in thee, that they also may be one in us: that the world may believe that thou hast sent me” (John 17:20–21).

17. Q—Does the foregoing account of the Godhead lay a sure foundation for the exercise of faith in him unto life and salvation?

**Bracketed material in 1835 edition, but without the brackets.