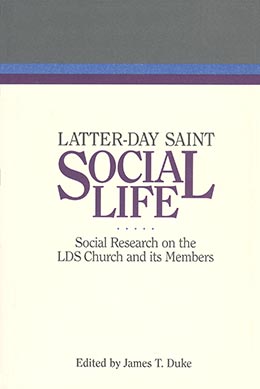 Social Research on the LDS Church and its Members

With strong roots and energetic cultivation, the sociological study of Latter-day Saints is flowering. In recent years there has been a steady growth in the scientific rigor of studies of LDS people (Cornwall 1994). This research paints a portrait of a growing church with devoted members who practice a healthy and commendable lifestyle.

The articles in this volume exemplify what sociologists, many of whom are committed members of the Church, have learned about the social conditions in which LDS people live and how the values, beliefs, and practices of the gospel of Christ affect their lives. In this introduction, I first discuss the relationship between sociology and religion and the way sociologists seek to discover patterns in social life. I then briefly discuss a few highlights from past sociological studies of LDS life, with special emphasis on the contributions of the Church’s Research Information Division. I conclude by discussing the selection of articles included in this book and the objectivity required for scientific publication.

Early sociologists such as Emile Durkheim and Max Weber recognized the vital relevance of religion for societies. Religion has permeated every aspect of almost every society throughout most of history, although every person has not been personally religious. Today, however, many social scientists discount the significance of religious values and ideals, and many have relegated religion to the margins of society. Just as frequently, religious people tend to discount the significance of the social sciences, especially in the study of religion. Because of this mutual distrust, it is necessary to say a few words about the connection between social science and religion.

When Enos said that he was taught by his father Jacob “in the nurture and admonition of the Lord” (Enos 1:1), he was emphasizing not only a spiritual truth but a sociological truth as well: parents have a profound effect on the beliefs, values, and behavior of their children. When Alma went with his brethren to preach to the Zoramites, he recognized that those who had been cast out of the synagogues because of their poverty had been humbled by their afflictions. They were therefore “in a preparation to hear the word” (Alma 32:5–6). Likewise, many other people have been humbled and prepared for religious experiences by social conditions such as poverty, discrimination, divorce, illness, or family conflict.

There is a close connection, therefore, between sociological and gospel principles, although this connection is not always easily discerned or recognized. Certain social principles facilitate church growth, marital adjustment, or physical and mental health, for example, just as spiritual principles also affect other aspects of life.

God is the great scientist! He knows all scientific principles—biological, physical, chemical, psychological, and sociological. He communicates to his children in such a way that they may use these principles for their benefit. It was not necessary for Moses to have a Ph.D. in physics or to understand all the principles of physics in order for him to open the waters of the Red Sea. Neither was it necessary for Joseph Smith to have a Ph.D. in sociology or twenty years’ experience as a CEO in order to set up a church with an effective organization that would grow and flourish. But physical principles were involved in the controlling of the waters of the Red Sea, and sociological principles are involved in the organization and functioning of the LDS Church.

Sociologists seek to discover patterns in social behavior and to identify causes and consequences of specific social and/or religious lifestyles. If a religion places a high value on families, obedience, or personal responsibility, for example, these values will be reflected in the behavior of people in such areas as family solidarity, obedience to laws, and the payment of legal debts. Likewise, the way churches are organized can have a profound influence on the lives of their members. For example, a church organized with a lay clergy, as is the LDS Church, is far different from a church led by a paid ministry, as are most other Christian denominations.

The connection between social and religious aspects of life may be illustrated with two classic studies of LDS people. Seldon Bacon (1957) compared the alcoholic consumption patterns of Orthodox Jews, Protestants, and Latter-day Saints. This study was featured in the most popular introductory sociology textbook of its day (Broom and Selznick 1958, pp. 49–50). Bacon found that many Orthodox Jews drank a glass or two of wine with meals, but very few of them became alcoholics. In contrast, very few LDS people ever consumed alcohol, but of those who did, a high percentage became alcoholics. Harold Christensen (1960, 1962) made a comparative study of adolescent sexual behavior in Utah, Indiana, and Denmark, published in the premier academic journal of sociology. He found that LDS teachings concerning chastity were reflected in the much lower rate of premarital sexual experience of LDS youth. Young people in Indiana had a moderate level of sexual experience, while those living in Denmark had the highest level.

In Bacon’s and Christensen’s studies, the religious influences are obvious, since LDS teachings forbid the consumption of alcohol and encourage chastity. The social effects of these religious teachings are also obvious—a lower level of alcohol consumption and a higher level of chastity. These behavior patterns, in turn, influence many aspects of the social lives of LDS people, including work, family life, and economic stability.

Highlights in the Study of LDS Social Life

The two previous studies are highlights in the history of studies of LDS social life. Let me refer briefly to a few others. In the first half of the twentieth century, LDS sociologists Kimball Young, Lowry Nelson, and Harold Christensen made important studies of the Church and its members. Reed Bradford’s bibliography of Mormon studies (1971) shows that during this time period, many academic theses and dissertations were written concerning LDS people, most of which were modest studies of student or Utah samples.

In the late 1940s, the “Harvard Study of Values” (Vogt and Albert 1966) investigated the social life of five different groups of people in “Rimrock” (Ramah), New Mexico. The five groups were Latter-day Saints, Texan homesteaders, Spanish-Americans, Navajos, and Zunis. While all five groups lived in the same geographical area and confronted the same dry climatic conditions, each group’s way of life was markedly different from the others’ and reflected the group’s own values. The Latter-day Saints were descendants of settlers sent by Brigham Young to New Mexico. They were primarily farmers who enjoyed high status in the community.

Thomas O’Dea was introduced to the Latter-day Saints through the Harvard Values Study. O’Dea subsequently wrote The Mormons (1957), which became a classic to which many later publications refer. This work discussed LDS social institutions and values but also identified sources of “strain” in Mormon life, such as progress versus agrarianism and rationality versus charisma.

Armand Mauss completed several studies of LDS congregations in California and Utah in the 1960s and 1970s. Mauss also compiled a bibliography of LDS studies (1984) and has recently completed a book summarizing the corpus of his work (1994). In 1974, Glenn Vernon published a collection of sociological studies of LDS people at his own expense. He also wrote a book called Sociology of Mormonism (1975) that was privately circulated.

A major expansion in LDS studies occurred with the formation of what is now called the Research Information Division (RID), originally a unit of the Correlation Department of the LDS Church. This group of researchers initially did evaluation research on such topics as visitors centers and Church media broadcasts. However, starting in the 1980s they embarked on a series of fundamental studies of (1) the demographic characteristics of Church members, (2) the process of conversion, and (3) the social conditions leading to activity or inactivity. These research reports were useful to Church leaders to “study it out” (D&C 9:8) and to provide information so that inspired decisions could be made concerning Church programs.

The articles in this volume by Heaton (1993); Cornwall, Albrecht, Cunningham, and Pitcher (1986); Albrecht (1989); Albrecht and Cornwall (1989); Albrecht and Heaton (1984); Cornwall (1989); and Thomas and Carver (1990), were all done initially for the Research Information Division and approved for publication. However, much of the research done by the RID is still regarded by the Church as proprietary and has not been published. The RID is one of the premier religious research organizations in the world. Currently it employs about twenty Ph.D. social scientists whose work has been highly praised (Stark in this volume) and who have produced hundreds of studies for the use of Church leaders.

The most famous study produced by this division was the “Young Men’s Study.” The original study was summarized in the Ensign (December 1984, pp. 66–68) and widely discussed by leaders of the Church in many wards and stakes. This study found that young men who serve missions are likely to come from active families who help their children have private spiritual experiences. The influence of teachers and leaders is also important (see also Thomas in this volume).

Most of the published research on LDS people is still restricted to members in the United States. The RID has made many important studies of LDS members outside the United States, most notably in the United Kingdom, Mexico, and Japan (see Heaton in this volume). However, most American sociologists do not have access to these international LDS members. As the LDS Church expands throughout the world, much more research concerning LDS people in other nations is needed.

Rodney Stark (1984 and this volume) made an important contribution to LDS studies in a special issue of the Review of Religious Research. Stark, who is not LDS, identified the LDS Church as the first new world religion in thirteen hundred years (since Islam) and predicted major growth of the Church in the next hundred years. He received criticism from some of his colleagues for making “straight-line” projections of LDS Church membership growth, but he has continued to maintain that these projections are accurate (see his addendum in this volume).

The last two highlights to be briefly mentioned are, first, the volume edited by Marie Cornwall, Tim Heaton, and Lawrence Young called Contemporary Mormonism (1994), which contains a number of original articles on various aspects of LDS social life. The second encompasses the articles with sociological significance published in The Encyclopedia of Mormonism (Ludlow 1992).

Much of the research reported in this volume was done by sociologists who are faithful and committed members of the Church. However, the authors have not referred to themselves in a personal way. It is therefore usually not possible to ascertain which articles were written by members and which by non-members. That is the way scientific writing is expected to be—objective and impersonal. As the editor, I used several criteria to select the articles to be included in this volume. First, I chose recent articles with strong methodological and theological significance. Second, I selected articles that represent a diversity of topics. Third, I avoided personal essays, articles published in non-refereed journals, articles whose primary purpose was either to praise or criticize the Church, and articles with an obvious ideological bias.

The articles in this volume embody the close connection that can and does exist between good scientific scholarship and a committed faith. They reflect favorably on the LDS Church because LDS people, for the most part, live a lifestyle that is conducive to favorable outcomes. Yes, some members of the Church do commit crimes and sins, have unhappy marriages, get depressed, die of lung cancer, or have low self-esteem. But, on balance, LDS people make choices that lead to salutary outcomes. The gospel gives them strength and help in dealing with the vicissitudes of life. While the Church and its members experience much opposition, and while the world seems to be polarizing into religious and non-religious clusters, many non-members appreciate LDS people and admire their lifestyle, even if they don’t embrace it themselves.

———. 1994. The Angel and the Beehive: The Mormon Struggle with Assimilation. Urbana, IL: University of Illinois Press.