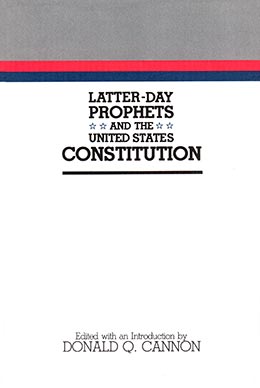 Acting President of the Twelve: 23 January 1970

President Spencer W. Kimball grew up in a home where patriotism and love of country were taught. He carried those early lessons into his administration as Church President.

President Kimball was a highly visible Church President, making numerous pronouncements on public policy. One example was his opposition to the MX Missile system which had been proposed for the Utah desert. President Kimball spoke out vigorously on this issue and buttressed his arguments both with scriptural and constitutional evidence. The Church also strongly opposed the passage of the ERA (Equal Rights Amendment) as the wrong way to gain a desirable end. Involvement in these issues presented a high political profile for the Church.

Main theme: The Constitution was established to prepare the way for the restoration of the gospel.

1. Every Latter-day Saint should sustain, honor, and obey the law of the land.

2. The only way to keep our freedom is to work at it.

3. The Mormon people are loyal to the Constitution.

12.1. Early in this dispensation the Lord made clear the position his restored church should take with respect to civil government. In the revelation he gave to the Prophet Joseph Smith, he said: “And now, verily I say unto you concerning the . . . law of the land which is constitutional, supporting that principle of freedom in maintaining rights and privileges, [that it] belongs to all mankind, and is justifiable before me.

Every Latter-day Saint should sustain, honor, and obey the constitutional law of the land in which he lives. (“Guidelines to Carry Forth the Work of God in Holiness” 4–5)

12.2. We are grateful that thou didst cause this land to be rediscovered and settled by people who founded a great nation with an inspired constitution guaranteeing freedom in which there could come the glorious restoration of the gospel and the Church of thy Beloved Son. (“President Kimball Dedicates Temple” 81)

12.3. The Church of Jesus Christ of Latter-day Saints was restored in 1830 after numerous revelations from the divine source; and this is the kingdom, set up by the God of heaven, that would never be destroyed nor superseded, and the stone cut out of the mountain without hands that would become a great mountain and would fill the whole earth.

History unfolded and the world powers came and went after ruling the world for a little season, but in the early nineteenth century the day had come. The new world of America had been discovered and colonized and was being settled. Independence had been gained and a constitution approved and freedom given to men, and people were now enlightened to permit truth to be established and to reign.

No king or set of rulers could divine this history; but a young, pure, and worthy prophet could receive a revelation from God.

There was purpose for this unveiling of the history of the world so that the honest in heart might be looking forward to its establishment, and numerous good men and women, knowing of the revelations of God and the prospects for the future, have looked forward to this day. (“The Stone Cut Without Hands” 9)

So if you value your citizenship and you want to keep it for yourself and your children and their children, give it your faith, your belief, and give it your active support in civic affairs. (TSWK 405; from an address given at the Rotary Club, Salt Lake City, UT, 8 Jun 1976)

12.5. This restoration was preceded by a long period of preparation. The Pilgrims and other Europeans were inspired to find this American haven of refuge and thus people this land with honest and God-fearing citizens. Washington and his fellows were inspired to revolt from England and bring political liberty to this land, along with the more valuable treasure of religious liberty so that the soil might be prepared for the seed of the truth when it should again be sown. (“Absolute Truth” 7)

12.6. Few men have enjoyed more of the guidance of the Holy Spirit than did President Woodruff. He was an apostle of the Lord Jesus Christ, was valiant and true all his days, and, in the provinces of the Lord, he was the fourth president of The Church of Jesus Christ of Latter-day Saints. He is the one who dedicated the Salt Lake Temple in 1893, and it was to him that the founders of the American nation appeared in the St. George Temple, seeking to have the temple ordinances performed for them. That was very unusual, brethren, and those kinds of miracles and visions and revelations were rather unusual, as you would know. These men of the American Constitution had lived in a day when the gospel was not upon the earth, but they were upright, good men who were entitled to all of the blessings which come to us. (“Preparing for Service in the Church” 47)

12.7. The Mormon people who are citizens of [the United States of] America today are intensely loyal to its Constitution and desire in every way to promote the God-given freedoms it was designed to protect They have had experience with the tragedy that results when those freedoms are not protected, but this only feeds their determination to do all within their power to protect these freedoms, both for themselves and others, everywhere. (TSWK 405; from an address given at the rededication of the Mormon Pioneer Memorial Bridge, Omaha, NE, 21 Apr 1979)

12.8. We encourage all members, as citizens of the nation, to be actively involved in the political process, and to support those measures which will strengthen the community, state, and nation—morally, economically, and culturally. (Quoted in Benson, “A Witness and a Warning” 33; from a letter from the First Presidency, 29 Jun 1979)

12.9. President Ronald Reagan has proclaimed the week beginning Sept. 17 (the 195th anniversary of the signing of the Constitution of Sept. 17, 1787) as Constitution Week and has urged all Americans to observe that week by stressing the importance of the Constitution to our individual freedoms and form of government.

In view of this proclamation and because of the high esteem in which the Constitution has been held by members of The Church of Jesus Christ of Latter-day Saints since the days of the Prophet Joseph Smith, we encourage leaders and members of the Church in the United States to heed President Reagan’s proclamation and during this week to remember with appreciation before the Lord the great blessings of liberty and opportunity which are guaranteed to the citizens of the United States. The First Presidency. (“First Presidency Urges Support of Constitution Week” 4)