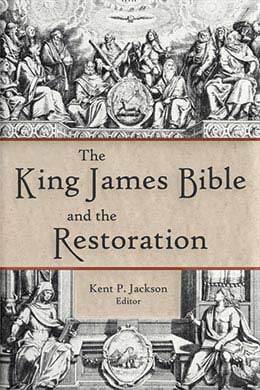 The King James Bible and the Restoration

The King James translation of the Bible celebrated its four hundredth anniversary in 2011. This historic text, the product of many hands and many years, has had a greater impact on the world than any other book in the English language. It is still in print today, four centuries since it first came off the London presses of Robert Barker, “Printer to the King’s most Excellent Majesty.” And it is not in print as an antiquarian artifact or novelty but as a book still very much in use in the twenty-first century.

During the year of the King James Bible’s quatercentenary, celebrations and commemorations were held all over the English-speaking world to note its many contributions to culture, language, religion, and society. One such event was held by the Religious Studies Center at Brigham Young University in Provo, Utah. Most of the chapters in the present book come from papers presented at that time; others were added to supplement the collection.

This is not a book solely about the history of the King James Bible and its contributions to the world in general, although parts of those narratives are presented in it. Scores of books have been written about the KJV, and readers will find many of them cited in the notes in this volume. This book has a more narrow focus, one of unique interest to the religion of The Church of Jesus Christ of Latter-day Saints. Its primary goal is to shed light on the intersection of the King James translation and Mormonism—hence the title, The King James Bible and the Restoration. In important ways, the King James Bible was one of the contributors to the founding of the Latter-day Saint faith, and it has continued to play a significant role in its history to the present time, even in lands where English is not the spoken language.

Initiated and prepared “by his Majesty’s special Commandment” and designed by the hand of Deity as an instrument for much good, the King James Bible is viewed by Latter-day Saints as a treasure that has brought the word of God into the lives of millions of people. The creators of the English Bible from Tyndale to King James realized well that the ancient Latin translation was as inaccessible to ordinary people as the Hebrew and Greek original texts. In their preface, the 1611 translators asked, “How shall men meditate in that, which they cannot understand? How shall they understand that which is kept close in an unknown tongue?” Translation into the language of the people was the answer: “Translation it is that openeth the window, to let in the light; that breaketh the shell, that we may eat the kernel; that putteth aside the curtain, that we may look into the most Holy place.” God’s words in the scriptures—“a whole armory of weapons,” “a whole paradise of trees of life,” and “a shower of heavenly bread sufficient for a whole host”—will bless us in manifold ways: “If we be ignorant, they will instruct us; if out of the way, they will bring us home; if out of order, they will reform us; [and] if in heaviness, comfort us.”