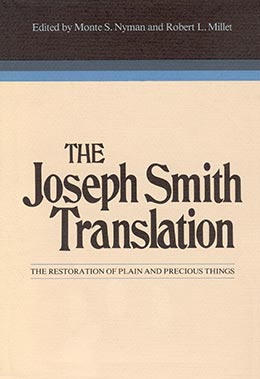 The Restoration of Plain and Precious Things

Joseph Smith the Prophet recorded the following in his journal for December 1831: “I resumed the translation of the Scriptures, and continued to labor in this branch of my calling with Elder Sidney Rigdon as my scribe” (History of the Church, 1:238; emphasis added). Joseph Smith’s work of the Bible was one of his greatest contributions towards giving this generation the word of the Lord (see D&C 5:10); it stands as a dynamic witness of his prophetic call. This contribution, however, has gone unnoticed or at least unappreciated by the vast majority of the members of the Church of Jesus Christ.

Because of the growing awareness of the Joseph Smith Translation (JST) in recent years, a symposium was held on the subject on 2–3 of November 1984. This was sponsored by the BYU Religious Studies Center under the direction of Monte S. Nyman and Robert L. Millet, but with the guidance of Robert J. Matthews, the general director of the center. The highlight of the symposium was the presence and major address of Elder Bruce R. McConkie of the Council of the Twelve. Thirteen other papers were presented by nine different contributors from Brigham Young University and from the seminaries and institutes of the Church Educational System. The symposium was concluded with a question-answer panel discussion involving these nine men. The views expressed in the various papers do not necessarily represent the position of The Church of Jesus Christ of Latter-day Saints or of Brigham Young University: each author takes a sole responsibility for the ideas and conclusions presented in his paper.

Because of his lifetime of labor in bringing to light much of the historical and doctrinal significance of the JST, we express a special appreciation to Robert J. Matthews, professor and dean of Religious Education at Brigham Young University.

It is sincerely hoped that this volume will do much to build faith and enlighten the members of the Church with regard to this critical “branch” of the Prophet’s calling.