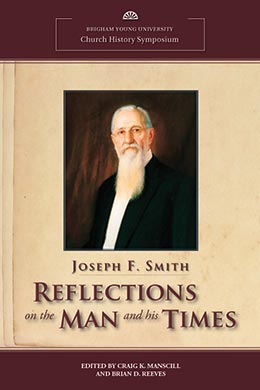 Joseph F. Smith: Reflections on the Man and His Times

In 2012, a symposium was jointly sponsored by the Brigham Young University Department of Church History and Doctrine, the LDS Church History Department, and the BYU Religious Studies Center. It was held over two days, Friday, March 3, at the LDS Conference Center in Salt Lake City, and Saturday, March 4, in Provo at BYU’s Conference Center. Keynote speakers were great-grandsons of Joseph F. Smith: Elder M. Russell Ballard of the Quorum of the Twelve Apostles, and Joseph F. McConkie, an emeritus professor from BYU Religious Education. In addition, more than thirty scholars made presentations on topics relating to Joseph F. Smith and his times. Many of the authors have refined their presentations for inclusion in this volume, and we gladly share them with you.

Church membership nearly doubled during Joseph F. Smith’s administration, from 278,645 members in 1901 to 495,962 members in 1918. Though the majority of members still lived in the western United States, President Smith felt a strong connection with members in many nations. He visited Europe in 1906, the first President of the Church to do so while in office, returned there in 1910, and made visits to Saints in Canada and the Hawaiian Islands. He and his Counselors encouraged members to be loyal to their governments, to be good citizens, and to remain in their native lands and strengthen local congregations. Church members were no longer encouraged to gather to Utah. Church leaders had counseled earlier generations of Saints to gather to Zion, to geographically separate themselves from the world in order to forge unity and grow in a center of spiritual strength. President Smith emphasized for subsequent generations the importance of living peaceably in the midst of the world while maintaining the legacy of unity and spiritual strength made possible through priesthood ordinances.

Joseph F. Smith spoke and wrote at great length about the incomparable power of the priesthood and strove to help all members understand its significance. At the time he was sustained as Church President, meeting schedules and lessons varied from ward to ward. He sought to unify auxiliary organizations and standardize curriculum. The general boards of the Sunday School, Mutual Improvement Association (for youth), and Primary began publishing uniform courses of study. To address the challenge of increasing leisure time for youth, the Boy Scout program was adopted for young men and a new Beehive program was developed for young women. The Relief Society, which had been encouraging stakes to write lessons for sisters since 1902, began publishing uniform lessons in 1914 and special messages for visiting teachers in 1916. These innovations became part of the new Relief Society Magazine to assist Mormon women in looking after one another’s spiritual and emotional well-being. For President Smith, it was vital that the auxiliaries work in harmony with the priesthood to teach the gospel and strengthen fellowship among Church members.

Joseph F. Smith sought to comprehend and teach the expansive truths of the gospel of Jesus Christ. He expounded Latter-day Saint doctrine through his letters, writings in Church magazines, and sermons. He and his Counselors in the First Presidency took pains to clarify essential doctrines. In “The Origin of Man” (November 1909) [1] and “The Father and the Son: A Doctrinal Exposition by the First Presidency and the Twelve” (June 1916) [2], they taught the true nature of our association with Heavenly Father and Jesus Christ. Joseph F. Smith delivered hundreds of gospel discourses to help Saints understand and live the teachings of Jesus Christ. His close friend Charles W. Nibley declared, “As a preacher of righteousness who would compare with him? He was the greatest that I ever heard—strong, powerful, clear, appealing. It was marvelous how the words of living light and fire flowed from him.” [3]

During the symposium, presenters taught that Joseph F. Smith had a challenging life, losing both of his parents before the age of fourteen, but he remained faithful and left a lasting legacy for the Church. He fought to protect the doctrines of the gospel, even against his fiercest critics. He served three missions for the Church: one as a young man in the Sandwich Islands (now known as Hawaii), another in the British Isles, and one more back in the Sandwich Islands to help reclaim members who had strayed from the Church through the influence of apostate Walter Murray Gibson. Joseph F. Smith was very devoted to his family, despite being a fully engaged Church leader; he had six wives (one later divorced), five adopted children, and forty-three biological children. He was blessed to have many mentors and friends, including Brigham Young, John Smith (his half brother), and Charles W. Nibley.

Joseph F. Smith is remembered not only for his long beard, but also for his lasting influence on the Church. He clarified the order of the priesthood and its offices, clarified Church practices and rituals, presided over an upswing in the construction of temples and other Church buildings, acquired Church historic sites and historical information, and fostered improvements in Church education, which led to the modern Church Educational System.

During the last few months of his life, President Smith felt particularly close to the Spirit. On October 3, 1918, as he pondered the scriptures and reflected on the Savior’s great atoning sacrifice for the redemption of the world, he received a marvelous manifestation concerning the Savior’s visit to the dead after his Crucifixion. The revelation later called “the Vision of the Redemption of the Dead” and canonized as Doctrine and Covenants 138, is a fitting capstone to the life of this prophet who untiringly preached the importance of bringing to all of God’s children the knowledge of the plan of life and salvation.