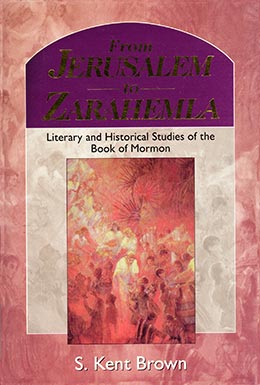 From Jerusalem to Zarahemla

Literary and Historical Studies of the Book of Mormon

Prompted by the Lord, Lehi and Sariah plunged their family into the desert of Arabia, opening a family saga that would continue for a thousand years but would remain unknown to the world for almost two and one-half millennia. This family story, along with that of others chronicled in the pages of the Book of Mormon, reveals civilizations transplanted from the ancient Near East to the Americas. As is the case with all known early societies, one reads of eras characterized by high achievement in government and commerce as well as those fraught with war and debilitating conflict. Like other ancient cultures, those represented in the Book of Mormon carry an important religious component. But unlike others, Book of Mormon peoples enjoyed a defining visit from the resurrected Jesus as well as centuries of prophecy anticipating that visit. In this respect, only the Bible matches the Book of Mormon as a religious record.

Even so, a reader could be excused for asking the question, Why another book on the Book of Mormon? After all, a number of works by Latter-day Saints have appeared in recent years that offer fresh perspectives on the Book of Mormon, particularly in the wake of President Benson’s stress on studying this book. [1]

My reply comes in two parts. First, I have come to the study of the Book of Mormon from the world of the Bible. I have found that asking questions of the text of the Book of Mormon, much as one asks questions of the text of the Bible, often yields both unexpected and insightful answers. Why? Because the work has its origin in the world of the Bible and is a genuinely ancient product. [2] As a result, it bears the inner markings of a composition written by ancient authors in real situations, situations that have influenced the manner in which they have composed and compiled the records that make up the Book of Mormon. In this connection, one has to be impressed—not put off—by the mushrooming number of studies that have taken this point of view and as a consequence have yielded important results. [3]

The second reason grows out of my observation that every time I push against the Book of Mormon text—asking hard questions, usually because I have noticed something of interest—the pushing brings results. For instance, more than twenty years ago I noticed in Nephi’s early writing an oft-repeated phrase, “my father dwelt in a tent” (1 Ne. 2:15; 10:16; etc.). Becoming curious, I began to ask, Why does this phrase appear in these passages? I was mildly surprised—although subsequent reflection has told me that I should not have been—to find myself staring at fundamental building blocks of Nephi’s composition in his efforts as both author and compiler. A published study resulted wherein I detailed a major source that Nephi drew on when compiling his own record, namely the record of his father, Lehi. That study, slightly revised, appears in this volume as “Recovering the Missing Record of Lehi.”

Pursuing the Exodus pattern in the Book of Mormon has offered an opportunity to explore a substantial piece of the fabric of this work. The exploration has led to discoveries that reach far beyond those initial finds when I began to stumble onto pieces of the Exodus story. Others, before me and after me, have also noted elements here and there in the text that tie back to the experience of the Israelites under Moses’ leadership. [4] As evidence began to grow more or less of its own accord, I wanted to see whether it all hung together when scrutinized. In my view, the Book of Mormon text has withstood the initial tests, portraying an extraordinarily rich tapestry of tradition and memory as well as scriptural interpretation and application. I have set out some of the dimensions of the Exodus theme in two essays, “The Exodus Pattern in the Book of Mormon” and “Moses and Jesus: The Old Adorns the New.”

Two of my most satisfying studies look at the teachings of two prominent Book of Mormon figures, Alma the Younger and Samuel the Lamanite. Everyone is familiar with the accounts of Alma’s dramatic conversion (Mosiah 27; Alma 36). I wanted to trace the impact of that experience on his speeches. I was not disappointed. I learned that all of his recorded sermons exhibit influences from that event. The results of my study appear in “Alma’s Conversion: Reminiscences in His Sermons.”

The one recorded sermon of Samuel the Lamanite offered a different kind of discovery. Because I was familiar with personal and communal laments in the biblical Psalms, I stumbled onto laments in Samuel’s address, laments which present features in common with the Psalms. What is significantly different is the prophetic dimension of these laments, a dimension not shared by the Psalms, as well as the fact that Samuel uttered his two poetic laments at the height of his condemnation of his hearers. I have entitled my study, “The Prophetic Laments of Samuel the Lamanite.”

Three of the first four pieces in the collection represent fresh studies, all growing out of 1 Nephi. The first, “What Were Those Sacrifices Offered by Lehi?” seeks to uncover the kinds of sacrifices offered by Lehi and the reasons why Lehi made those particular offerings, including the need to atone for sin. The second study suggests Nephi’s personal reasons for including Isaiah 48–49 in his first book, reasons that go back to Nephi’s feelings for Jerusalem and to his belief that Isaiah’s prophecies spoke about the journey of his family to the New World. I have called this piece, “What is Isaiah Doing in First Nephi?” The third study—number four in the collection—consists of an examination of the meanings of certain terms in the Book of Mormon, terms that can refer to servitude in the Bible. Not surprisingly, these terms also seem to point to servile situations among Book of Mormon peoples. This study carries the title, “Sojourn, Dwell, and Stay: Terms of Servitude.”

A fourth new study focuses on thorny legal and social issues that arose when the renegade priests of king Noah abducted Lamanite women and obliged them to become their wives. In my view, the complexities generated by the incident—which ruptured a treaty—can best be understood in light of biblical law and custom. Such a conclusion should not surprise us because the people involved had descended from families who came from Jerusalem and had treasured a record which contained the Mosaic law. This study bears the title, “Marriage and Treaty in the Book of Mormon: The Case of the Abducted Lamanite Daughters.”

One of my earliest studies of a Book of Mormon issue attempted to determine the approximate date of the visit of the risen Jesus to the Nephites and Lamanites in the city of Bountiful. Latter-day Saint artists generally depict Jesus’ visit as immediately following the terrible storm and the three days of darkness which were associated with Jesus’ death (3 Nephi 8–10). But it seemed to me that in light of 3 Ne. 10:18, which speaks of Jesus’ visit happening “in the ending of the thirty and fourth year,” a substantial period of time intervened between the visit and the earlier storm, which began “in the thirty and fourth year, in the first month, on the fourth day of the month” (3 Ne. 8:5). Once I began to dig around, evidence appeared in the text to support a view that Jesus did not come to the assembled people in Bountiful until many months after his resurrection. Now slightly revised, I have titled this piece, “When Did Jesus Visit the Americas?”

A word is now in order about what these studies are and are not. They represent, on the one hand, attempts to set out the dimensions and complexities of the Book of Mormon record. They are not, on the other, attempts to finalize what can or cannot be known about a subject. One must keep in mind that students are somewhat handicapped because the English translation of Joseph Smith is effectively the Urtext, the original document, to which we must address all questions. We do not possess the ancient text from which Joseph Smith worked. Because that text is not available, there are limitations as to how far we can pursue certain issues. For instance, a verbal phrase frequently used in the Exodus account is “bring out” or “bring forth.” One can, of course, readily check the Hebrew term in the Bible. But we are limited to supposing that the same or a similar ancient term underlies these English phrases in Exodus-like settings described in the Book of Mormon.[5] Hence, in some ways—though not all—these studies must be considered provisional, not definitive.

[3] A substantial number of contributions to the volumes edited by Monte S. Nyman and Charles D. Tate Jr., under the title The Book of Mormon and published by the Religious Studies Center at Brigham Young University, exhibit the kind of interest that I have noted. In addition, several articles under the title “Book of Mormon” in the Encyclopedia of Mormonism bring together in brief form evidence that arises from the text. Moreover, the Foundation for Ancient Research and Mormon Studies (F.A.R.M.S.) has published a growing list of titles, both books and article-length studies, that argue for an ancient provenance for the book itself, including the Journal of Book of Mormon Studies, which began to appear in 1992.