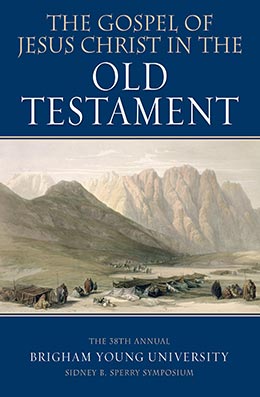 The Gospel of Jesus Christ in the Old Testament

The gospel of Jesus Christ has been needed since the inception of human residence on planet earth, and we know that his gospel has indeed been on the earth from the beginning. The book of Moses records, “And thus the Gospel began to be preached, from the beginning, being declared by holy angels sent forth from the presence of God, and by his own voice, and by the gift of the Holy Ghost. And thus all things were confirmed unto Adam, by an holy ordinance, and the Gospel preached” (Moses 5:58–59).

The Prophet Joseph Smith further declared: “Perhaps our friends will say that the Gospel and its ordinances were not known till the days of John, the son of Zacharias. . . . For our own part we cannot believe that the ancients in all ages were so ignorant of the system of heaven as many suppose, since all that were ever saved, were saved through the power of this great plan of redemption, as much before the coming of Christ as since. . . . We conclude that whenever the Lord revealed Himself to men in ancient days, and commanded them to offer sacrifice to Him, that it was done that they might look forward in faith to the time of His coming, and rely upon the power of that atonement for a remission of their sins.”[1]

President Brigham Young likewise attested the presence of the Savior’s truths throughout the Bible: “In all my teachings, I have taught the Gospel from the Old and New Testaments. I found therein every doctrine, and the proof of every doctrine, the Latter-day Saints believe in, as far as I know. . . . There may be some doctrines about which little is said in the Bible, but they are all couched therein, and I believe the doctrines because they are true, and I have taught them because they are calculated to save the children of men.”[2]

We cannot be true students of the Book of Mormon or Doctrine and Covenants without also being students of the Old Testament, for Jesus himself declared the Old Testament scriptures “are they which testify of me” (John 5:39). We would expect to find Old Testament teachings and language in all other, later scripture because they are all from the same Source. “Know ye not that the testimony of two nations is a witness unto you that I am God, that I remember one nation like unto another? Wherefore, I speak the same words unto one nation like unto another. And when the two nations shall run together the testimony of the two nations shall run together also. And I do this that I may prove unto many that I am the same yesterday, today, and forever. . . . For I command all men, both in the east and in the west, . . . that they shall write the words which I speak unto them” (2 Nephi 29:8–9, 11).

It should not surprise us, then, that the doctrines of the gospel of Jesus Christ were taught and practiced in the time frame of the Old Testament: the first principles and ordinances of the gospel; the pillars of the Creation, Fall, and Atonement; the ordinance of celestial marriage and subsequent importance of children, posterity, and family history work; the covenant and the mission of holy and chosen people; the sacrament; tithes and offerings; patriarchs and patriarchal blessings; names and titles of God/Jehovah/Jesus Christ; the appearance of God and angels; the role of prophets and prophecy, including messianic prophecies; revelation, dreams, and visions; premortal life; the spirit world; worship practices; record keeping; miracles; observance of holy days and Sabbaths; priesthood functions and administrations; Temples and Temple worship, clothing, and sealing power; laws of health; scattering and gathering of Israel; apostasy and restoration; missionary work, or raising the warning voice to individuals and nations; human deification (theosis, or the doctrine of humans’ potential to become like Heavenly Father); signs of the last days; the Second Coming; the Millennium; and Zion. All these things were known and taught during Old Testament times.

This volume, The Gospel of Jesus Christ in the Old Testament, features papers delivered at the 38th annual Sidney B. Sperry Symposium (2009) on a variety of vital subjects. Elder F. Melvin Hammond, emeritus member of the Seventy, introduces this volume with a look at the remarkable contributions of the Prophet Joseph Smith in understanding the Old Testament. Other writers illuminate such diverse subjects as eternal marriage, family, and motherhood in the Old Testament; the plan of salvation in early Old Testament writings; the roles of vicarious sacrifice, Temple worship, covenant making, and angels in the salvation of God’s people; the significance of the Lord’s loving-kindness; vivid gospel teachings from the books of Ruth, Isaiah, and Hosea; the functions of the Holy Spirit in Old Testament times; and an examination of how Christian writers in the post–New Testament era saw Christ and his gospel throughout the Old Testament.