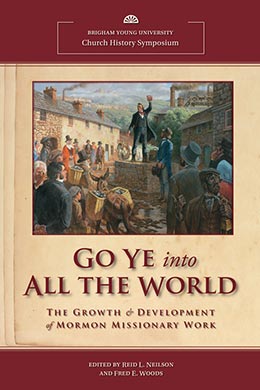 Go Ye into All the World

The Growth and Development of Mormon Missionary Work

Young Latter-day Saint elders and sisters, dressed in white shirts and dark suits or conservative dress, have become the public face of The Church of Jesus Christ of Latter-day Saints in the twenty-first century. On June 25, 2007, Mormon leaders gathered at the Missionary Training Center in Provo, Utah, to celebrate a missionary milestone. Just over 175 years since Joseph Smith's brother, Samuel, first set out to proselyte with a knapsack filled with copies of the Book of Mormon, the one millionth Mormon missionary was beginning his two-year service. He joined the other 53,000 full-time young men and young women who were then evangelizing in the Church's approximately 350 missions around the world.

Yet the 2007 Latter-day Saint landmark and its implications for religions in America and abroad remains one of the most neglected areas of historical and religious studies. Mormon missiology need not—and should not—continue to fall through the cracks of "traditional Christian" mission histories. This collection of essays is an attempt to help tell some of the stories of Mormon missionary work to a larger audience.

It is important to note that early Latter-day Saints, like other antebellum American Christians, believed that the resurrected Jesus Christ had commanded his disciples in the Old World to "teach all nations, baptizing them in the name of the Father, and of the Son, and of the Holy Ghost" (Matthew 28:19). Although nearly two millennia had passed since the earliest Christians attempted to meet this obligation, their counterparts in the New World still sought to share the Christian gospel with every nation, kindred, and tongue. The Mormons, despite their poverty, persecution, and eventual displacement to North America's Great Basin region, helped shoulder the ever-present burden of fulfilling the biblical Great Commission. These and subsequent Latter-day Saints have attempted to recapitulate biblical history; Mormon missionaries see themselves walking in the footsteps of earlier evangelists like Paul and Timothy.

Latter-day Saints in America shared much of the same Christian worldview as their Protestant colleagues. Millenarianism, for example, influenced the thought and decision making of Mormon leaders and laity alike. In the months leading up to the formal organization of the Church in April 1830, Joseph Smith dictated a number of revelations that signaled that end-of-times evangelism would soon play a major role in his new religious movement. In February 1829, for example, he dictated a revelation addressed specifically to his father, Joseph Smith Sr., calling him to preach the gospel (see D&C 4).

Over the next several years, the Church's founding prophet dictated similar inspired callings for numerous members of his growing flock. It soon became clear that all baptized members were responsible for spreading the news of the Restoration. Once they were converted, they were responsible to warn their neighbors (see D&C 88). Latter-day Saints were promised great spiritual blessings, including eternal joy, if they fulfilled their missionary duties and helped save souls (see D&C 18). As a result, members of the growing Mormon movement felt the need and desire to share what they believed to be the restitution of primitive Christianity.

Since Samuel Smith's initial evangelistic foray, missionary work has become the lifeblood of the Restoration. On March 15, 2011, hundreds of historians and devotees of the Mormon past met in the Conference Center at Brigham Young University to teach and learn about missionary work among the Latter-day Saints. This symposium was sponsored by the Religious Studies Center at Brigham Young University. We hope you enjoy reading through the symposium presentations featured in this collection of essays. The authors write of the faith, sacrifice, and great love on the part of those who took up the call to spread the gospel in this dispensation and those whose lives were changed as they heeded the message of the Restoration and the Prophet Joseph's charge not to "let a single corner of the earth go without a mission." [1]