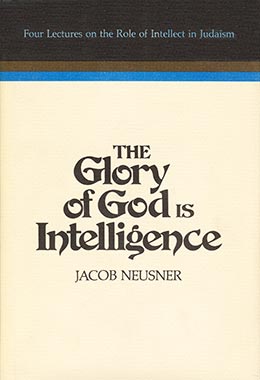 The Glory of God is Intelligence

Four Lectures on the Role of Intellect in Judaism

Introduction, in The Glory of God Is Intelligence: Four Lectures on the Role of Intellect in Judaism (Provo, UT: Religious Studies Center, Brigham Young University, 1978), xvii–xxi.

When, on October 5, 1976, at the request of BYU’s Forum Committee I wrote to Professor Jacob Neusner to invite him to deliver an address at a Forum Assembly of the student body, neither he nor I could have guessed that our correspondence during the next few months would lead to these four lectures. The overall concept of the lectures came to him, as he typifies such strokes of insight in his first lecture, in a “moment of inexplicable understanding . . . in which all things fall together into a whole, . . . a moment of revelation” as it were. During the first four months of 1977, the correspondence between Dr. Neusner and myself consisted largely of suggestions and counter-suggestions regarding topics and titles not only for the Forum lecture but also for three additional presentations which he had graciously consented to prepare. We were then contemplating four lectures somewhat divergent in focus and content. Then on May 3, Professor Neusner telephoned me to say that, inspired by the phrase “The glory of God is intelligence,” which appears as part of the logo on the University’s stationery, he had decided to offer a summary of almost a decade of study in four interrelated lectures on Judaism’s most distinctive aspect: learning as devotion to God.

In taking up the dictum “The glory of God is intelligence,” Professor Neusner has brought into sharp focus the paramount feature of the transcendence of God. The phrase, of course, derives from Mormon scripture: “The glory of God is intelligence, or, in other words, light and truth.” (Doctrine and Covenants 93:36.) The holy books of the Latter-day Saints are replete with the notion that intelligence and knowledge constitute essential ingredients in the eternal scheme of man’s existence and progression. A few examples will illustrate this point. In the Doctrine and Covenants the idea of salvation is linked directly with the dispelling of ignorance: “It is impossible for a man to be saved in ignorance” (131:5). Further, in section 130 of the same book we read: “Whatever principle of intelligence we attain unto in this life, it will rise with us in the resurrection. And if a person gains more knowledge and intelligence in this life through his diligence and obedience than another, he will have so much the advantage in the world to come.” (D&C 130:18–19.) One explicit directive, among others, to acquire intelligence is found in section 88 of the Doctrine and Covenants: “Seek ye out of the best books words of wisdom; seek learning, even by study and also by faith” (88:118). Mormons, then, possess a theology which includes, nay, embraces the concept that the processes of salvation, the steps to sanctification, are profoundly and inseparably connected with the acquisition of knowledge and intelligence, a result being that one is enabled to “comprehend even God.” (D&C 88:49.)

Almost at the dawn of the existence of The Church of Jesus Christ of Latter-day Saints stood the School of the Prophets, organized by Joseph Smith in December 1832, as the educational arm of the priesthood. The school was designed to instruct the brethren regarding “things both in heaven and in the earth, and under the earth; things which have been, things which are, things which must shortly come to pass; things which are at home, things which are abroad; the wars and the perplexities of the nations, and the judgments which are on the land; and a knowledge also of countries and of kingdoms.” (D&C 88:79.) This concept of learning, even com mandment to study, underscores the idea that for Latter-day Saints, too, learning may be thought of as an act of devotion to God, an action which possesses transcendent meaning. This notion as it appears in Judaism forms the major focus of Professor Neusner’s Forum address, the first of the four lectures.

The next three lectures report the origin and development of the ideal of Torah-learning in Judaism, the careful study and scrutiny of what God revealed in the law in order that it might be practically applied in the everyday living of Jews. Pivotal in the development of this ideal are the events of A.D. 70, the year that saw the fall of Jerusalem and the destruction of its temple at the hands of the Romans and their general, Titus. More than anything else, these catastrophic events laid on Jews the onus of restructuring their lives in the absence of the temple which was both central to and imparted meaning to life for Israelites. The two groups that survived the fall of Jerusalem and that achieved varied success in giving order to the lives of their adherents after the temple’s loss were Christians and Pharisees. It is to the latter that Professor Neusner draws our attention in these lectures.

It has been concluded almost universally by scholars of Judaism of late antiquity that pre-70 Pharisaism had already developed the ideal of a piety manifested in studying Torah, God’s law, oral or written. It is this conclusion that Dr. Neusner questions in Lecture Two. There exists no evidence, he observes, for this notion in the sources, which include the New Testament books, the writings of the Jewish historian Josephus, and the Mishnah and Tosefta, both redacted about A.D. 200. In fact, after one lays aside the biases in the sources towards the Pharisees, pro and con, one discovers that Pharisees were determined to follow a course in life that sought to imitate the ritual purity practiced by the priests of the temple. The religious inclinations of the Pharisees, then, were inspired by the centrality of temple worship, as were most Jews, except with more intensity, especially on issues that involved ritual cleanness in eating and tithes on foods. Consequently, the idea that Pharisaic religiosity before 70 was deeply rooted in an intense study and systematic interpretation and application of the law cannot be sustained.

Such a phenomenon appears only in the aftermath of the war against Rome when, in the wake of the loss of the temple and its sinofferings and the corresponding ruin of the ideal of the temple’s purity being replicated in each home in Jerusalem, the Pharisees restructured Jewish life by teaching that ritual offerings of the cult could be replaced by acts of loving-kindness, the temple’s purity by cleanness in every Jew’s workaday life, and, most important, worship of God through sacrificing by study of Torah. This new synthesis, in which stress fell on the study of Torah as the vehicle of devotion and rabbi took the place of priest, became known as Rabbinic Judaism. Tracing this development forms the core of Lecture Three.

In Lecture Four, Dr. Neusner makes plain the remarkable qualities of the Mishnah, that summary of legal commentary on scripture which arose from the synthesizing work of the rabbis and scribes who worked at the small academy at Yavneh during the decades immediately before and after the second disastrous revolt by Jews against Rome led by Simeon bar Kokhba beginning in A.D. 132. What is to be underscored, argues Professor Neusner, is the open-ended, timeless, continually contemporaneous character of the Mishnah which emerges from the warp and woof of its language, its repetitive structure, grammar, and syntax. The recurrent structures of Mishnah’s language serve not only to replace the regular and recurring symbolic acts of the now lost ritual of the fallen temple but also to communicate order, meaning, and transcendent value to the incidents of everyday living. In achieving this form of communication through repetitive, holy language, the rabbis broke with the past since they chose not to encapsulate their insights within books which they then attributed to Adam or to Moses, such as done by pseudepigraphists, nor did they cast their ideas into the linguistic patterns of ancient texts, such as done by the sectarians of Qumran. Instead, the language of the Mishnah, each time it was approached, led its readers to fresh perspectives on one’s relationship to God. The basic vehicle to these fresh insights is the mind, the seat of intelligence. Such is the nature of the Mishnah.

The illumining contribution made in these lectures towards understanding the development and essential character of Judaism is obvious to any reader. Professor Neusner has won our warm appreciation for accepting the invitation to return to Brigham Young University. And we express our deeply felt thanks to him for making these significant lectures available for publication.