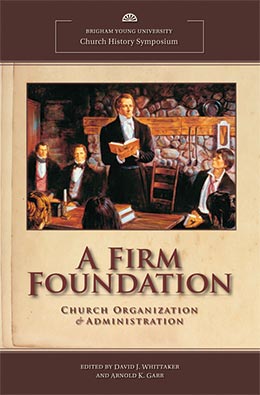 The subject chosen for the 2010 Brigham Young University Church History Symposium at Brigham Young University was the organizational and administrative history of The Church of Jesus Christ of Latter-day Saints. The response for the call for papers for the symposium was very gratifying, and we knew from the beginning that the possible topics were many because most topics in Mormon history are related to administrative history. As a divinely mandated delivery system for the saving ordinances of the gospel of Jesus Christ, the basic priesthood structure was established under the inspired direction of Joseph Smith in its earliest years. Established in Fayette, New York, on April 6, 1830, with about fifty people attending the organizational meeting, the Church has grown to over fourteen million members in countries throughout the world. The Church’s success can in part be attributed to the firm foundation established by Joseph Smith.

The symposium itself was organized into sessions that traced the major developments in the organizational history of the Church. For this volume, we have arranged the papers into a basic chronological structure, allowing readers to follow the beginnings and the subsequent developments as they unfolded. Richard Lyman Bushman’s opening talk set the stage for the conference, showing the great organizational genius of Joseph Smith that managed to combine both revelatory and bureaucratic elements into the structure of the Church from its earliest years.

The second section contains articles that unfold in detail the emergence of the presiding quorums and priesthood structures that remain central to the Church today.

The third and longest section gives attention to the programs and organizations that came following Joseph Smith’s death in 1844. This section addresses the important adjustments to administration as the Church encountered the end of its isolation in the Great Basin following the Gold Rush, and later as members moved out the more rural and agricultural settings at the end of the nineteenth century. It also brings the story up to the present time, providing two case studies of Church administration in times of special challenges, one during the Second World War, and the other by looking at the contemporary challenges of a stake in Utah Valley.

A fourth section returns our attention to two key topics: the role of the expanded seventies quorums in the modern church and a closer look at the current operations of the missionary department of the Church.

Many topics are not treated in this volume, and a number of those presented during the symposium will be found elsewhere. For example, Jill Mulvay Derr’s presentation on the early history of the Relief Society will be published in her forthcoming biography of Eliza R. Snow, and David J. Whittaker’s abbreviated presentation on the key role of Joseph B. Keeler at the beginning of the twentieth century had been published in full as “Joseph B. Keeler, Print Culture, and the Modernization of Mormonism, 1885–1918,” in Religion and the Culture of Print in Modern America, ed. Charles L. Cohen and Paul S. Boyer (Madison: University of Wisconsin Press, 2008), 105–27.

Because of the rich and complex history of the administration of the Church cannot be treated in just one volume, a bibliographical essay appears at the end of the volume that will direct readers to the growing literature on the topics of the symposium.

We are grateful to Elder Marlin K. Jensen, Church Historian and Recorder, for agreeing to provide a foreword to this volume. He has consistently provided encouragement and support for the serious study of Church history over the years he has served in his calling. We are also grateful for the consistent support of Kent P. Jackson, then the associate dean of Religious Education at BYU, who saw the potential for this topic when it was proposed and has consistently encouraged us as we organized the symposium and worked on the volume. Thanks also to the Religious Studies Center staff for their work on the editing and production end of this volume: Robert L. Millet, R. Devan Jensen, Brent R. Nordgren, Joany O. Pinegar, Jessica S. Arnold, Jacob F. Frandsen, Jonathon R. Owen, Rosalind E. Ricks, and Jeffrey M. Wade.