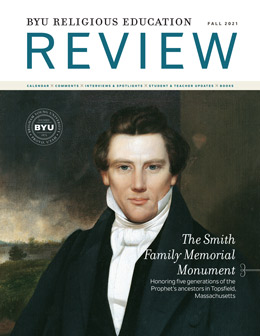 Thirty Years as Host of Music & the Spoken Word

Thirty Years as Host of Music & the Spoken Word

Lloyd D. Newell, a professor of Church history and doctrine at BYU, is perhaps better known for hosting each week’s Music & the Spoken Word broadcast. Did you know he’s been hosting it for over thirty years? In speaking with Brother Newell concerning this article, he said, “Teaching in BYU Religious Education over the years has complemented my Church calling to write and deliver the Spoken Word. Each time I enter the classroom and each time I produce an inspirational Spoken Word, I strive to teach truth and build faith, to offer encouragement and hope. They are similar messages, but one is in the classroom, and the other is over broadcast airwaves. It is a great honor and blessing to be part of both.”

He officially became the announcer on March 31, 1991. “To put this into perspective,” the Tabernacle Choir Blog noted, “when he stepped up to the microphone, the Berlin Wall had recently come down and the two Germanys had just reunited months earlier, Iraq was invading Kuwait, and ‘Under the Sea’ from The Little Mermaid won an Oscar. The first web pages were in their infancy, YouTube wouldn’t be invented for another fourteen years, and a gallon of gas cost $1.34. Times have changed, but the choir’s program has remained a constant.”[1]

The Tabernacle Choir at Temple Square’s Sunday morning show first aired more than ninety-two years ago on July 15, 1929, when nineteen-year-old Ted Kimball stood on a ladder to reach a microphone hanging from the ceiling and announce each musical number. Since that time, the broadcast has known only three announcers: Richard L. Evans, Spence Kinard, and Newell.

Richard L. Evans was the first regular announcer from the summer of 1930 until 1971—more than forty-one years. Spence Kinard announced from 1972 to 1990. Lloyd Newell began filling in at the end of November 1990, and he has been the voice for nearly one-third of all the 4,777 broadcasts.

When he was extended the calling and set apart in 1991, President Gordon B. Hinckley, then a counselor in the First Presidency, said that each week’s message needed to be an “inspirational gem.”

“Those two words ring in my ears and in my heart all the time,” Newell said. When he writes the Spoken Word messages, he will ask himself, “Is this an inspirational gem? Does it enlighten and inspire? Does it add an insight or perspective that is wise and interesting and encouraging?”

President Hinckley also told him that this call would change his life, Newell said. “President Hinckley was right, it has changed my life and my family’s life for the better. He understood it far better than I did. . . . I think he certainly had a greater vision for it than I did at the time.”

Previously a news anchor for CNN and a TV station in Pennsylvania, Newell holds a master’s in communications and a PhD in marriage, family, and human development from BYU. “When I did the news, no one ever came up to me after a newscast and said that newscast really touched my heart or that really made a difference in my life,” he said. But with the Spoken Word messages, “I’m blessed to hear that all the time.”

Newell credits his wife and family for their constant support over the many years. “I could not have done this calling without my wife by my side, and the love and support of my family.”

Newell works several weeks in advance on the Spoken Word messages. Ideas come from everywhere and anywhere. And he doesn’t have a favorite — it’s too difficult to pick just one.

“My antenna is always raised because I’m always looking for ideas and stories, universal principles and timeless truths that would make for a good Spoken Word,” Newell said.

During the pandemic, he has continued to write and record new messages, continuing the historic record of the world’s longest continuous broadcast. “We can’t bring 500 choir and orchestra members in for a live broadcast during the pandemic, but I can go up to the Conference Center every few weeks and record with a production crew four or five new Spoken Words that will air over the next weeks,” Newell said.

Delivering inspirational messages each week to an audience in the millions and being a key part of such a treasured and historic legacy such as Music and the Spoken Word is no small task. But with such a visible calling that he makes look easy, Newell said there have been personal challenges along the way.

“Of course I’ve had many times of feeling inadequate,” Newell said. “How can I capture what I want to say or what I’m feeling and how can I deliver it in a way that would make a difference? . . . It is truly humbling. . . . But it is a great honor and blessing to be associated with the choir and its broadcast.”

As he reflected on thirty years of his association with the choir, Newell highlights the opportunities of touring with the choir and orchestra as they’ve performed in the United States and across the world and presenting a Spoken Word message during the concerts, along with building relationships with people, from those performing to those behind the cameras and in the production booths. And since his weekly Spoken Words are nondenominational messages, he treasures the many associations and interactions he’s had with people from all walks of life and all religious backgrounds across the world.

“The essence of the broadcast remains still the same,” Newell said of the program. “There is beautiful music from the Tabernacle Choir at Temple Square and an inspirational message. It’s different now as the technology has changed with more digital equipment and modern technology and that it goes beyond a radio and TV program to reaching countless people through online platforms.

“With this broadcast, we’re trying to spread hope and goodness, truth and light,” he said, adding, “the music is timeless,” and the Spoken Word message “gives us a chance to talk about everlasting things and to offer perspective and encouragement and hope.