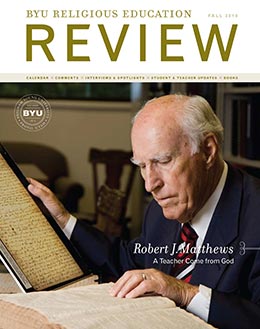 The Winds of Change

At the beginning of the new year, the employees at the Religious Studies Center (RSC) were settling into their newly renovated offices. This renovation represented yet another milestone in a long journey that began thirty-five years ago when Jeffrey R. Holland, the dean of Religious Education, established the RSC to facilitate religious study at Brigham Young University and throughout the entire Church. To keep up with a growing Latter-day Saint population, the quantity and quality of books, journals, and magazines produced by the RSC has increased over the years. The number of symposia and conferences the RSC hosts or sponsors has also increased. An RSC website is now viewed in approximately seventy-seven countries worldwide. The website has helped the RSC keep up with an ever-growing global community and better facilitate the objectives first envisioned by Dean Jeffrey R. Holland.

With the smell of new bookshelves and freshly painted walls still in the air, the winds of change at the RSC began to blow again. About halfway through the winter semester, two changes were announced that significantly affected the RSC. On July 1, Richard E. Bennett was appointed to serve as associate dean of Religious Education and associate director of the RSC. He replaced Kent P. Jackson, who left for a two-year teaching assignment as an administrator at the BYU Jerusalem Center for Near Eastern Studies.

A second change affecting day-to-day operations was replacing the RSC publications director, Richard Neitzel Holzapfel, who was called to serve as mission president of the Alabama Birmingham Mission. His new assignment promised to leave a chasm at the RSC. After an extensive search it was announced that Robert L. Millet would become the new publications director of the RSC upon Holzapfel’s departure.

Richard Bennett is a native of Sudbury, Ontario, Canada, and joined the BYU Religious Education faculty in 1998 after twenty years as head of Special Collections at the University of Manitoba and two years as curator of Mormon manuscripts in the L. Tom Perry Special Collections at BYU. He earned a PhD in U.S. intellectual history from Wayne State University. He is the author of many books and numerous articles, mainly on nineteenth-century Church history.

Before joining the BYU faculty in 1983, Robert Millet worked with LDS Social Services as a marriage and family counselor and with the Church Educational System as an instructor. Brother Millet received his bachelor’s and master’s degrees from BYU in psychology and his PhD from Florida State University in religious studies. Since coming to BYU, he has served as chair of the Department of Ancient Scripture, dean of Religious Education, Richard L. Evans Professor of Religious Understanding, and Abraham O. Smoot University Professor. He is the author of over sixty books and a myriad of articles, dealing mostly with Church history and doctrine and the Church’s relation to other faiths.

The RSC staff and student employees are grateful for the dedication and inspiration provided by Richard Holzapfel and Kent Jackson. We will miss their extraordinary talents and leadership; however, we anticipate that our two new leaders will undoubtedly continue in their footsteps of excellence and growth at the RSC.

When Jeffrey R. Holland was president of BYU, he said of the RSC, “We build on a grand tradition and hope to add an increasing amount of substantial, published research to the good work already begun.” With these new changes, the RSC remains committed to pursuing an ever-expanding horizon of gospel scholarship and sharing its resources with a worldwide audience.