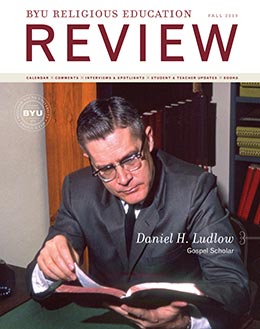 A House of Order: Organizing Religious Education at BYU

Scott C. Esplin (scott_esplin@byu.edu) was an assistant professor of Church history and doctrine at BYU when this was written.

The Lord and his prophets emphasize educational breadth. In Kirtland, the early Saints were commanded to make a diligent study of both spiritual and temporal subjects (see D&C 88:78–79). Church-sponsored elementary and secondary schools were subsequently operated in Ohio, Missouri, and Illinois. Five years after settling in Utah, Brigham Young reiterated the Church’s position on learning: “There are a great many branches of education: some go to college to learn languages, some to study law, some to study physic[s], and some to study astronomy, and various other branches of science. We want every branch of science taught in this place that is taught in the world.” However, emphasizing the study of religion, President Young continued, “Our favourite study is that branch which particularly belongs to the Elders of Israel—namely, theology. Every Elder should become a profound theologian—should understand this branch better than all the world.”[1] When he established Brigham Young Academy in 1875, President Young fulfilled this vision, creating a place where the spiritual and the secular could meet.

However, blending the disciplines has not been without challenge. "At various times in our own history," Elder Jeffrey R. Holland, former dean of Religious Instruction, observed, "There have been some tensions between Religious Instruction and various other parts of the university."[2] The organization changes to religious education at Brigham Young University over the years reflect the strain to create a place where Church scholars can, as Elder Neil A. Maxwell once described, “Speak in the tongue of scholarship . . . without losing the mother tongue of faith.”[3]

In the academy’s earliest days, courses in religion were taught by all faculty members who sought to implement President Young’s charge, “You ought not to teach even the alphabet or the multiplication tables without the spirit of God.”[4] However, increasing specialization across campus eventually brought the same to religious education, necessitating the first appointment of a full-time religion professor in 1930. Ten years later, a separate Division of Religion was formed, further isolating the study of religion on campus. Granted “co-ordinate academic standing with the schools of the University,” the division included four subject-areas (Bible and Modern Scripture, Theology and Religious Philosophy, Church History, and Church Organization) and was charged with being “a general service division to all university departments in the field of religious education.”[5] However, as President Boyd K. Packer observed, the designation Division of Religion “was only too descriptive” as faculty found themselves “divided among themselves [and] from the faculties of the other disciplines at the University.”[6] Two decades later, restructuring again occurred when a dean was appointed to oversee BYU’s newly formed College of Religious Instruction. However, the reorganization came with a caution from President David O. McKay who warned, “We must always remember at BYU that religion is to be taught in any and all subjects and not confined to the College of Religion.”[7]

President McKay’s caution proved prophetic when in 1973 the College of Religious Instruction was dissolved, removing the college title and replacing it simply with Religious Instruction. Reassuring faculty concerned about the change, President Packer summarized: “Your work is not to be isolated as the other disciplines may well be. It was announced that hereafter religious education would not be limited to one college. . . . Your work has now moved from a college to the University.”[8] Outlining reasons for the change, university president Dallin H. Oaks declared, “This move emphasizes the prominence of religious education at BYU by affirming its centrality to the University and erasing the restrictive college boundary. . . . The teaching of religion is a university-wide concern which will be fostered by a university-wide jurisdiction.”[9] Specifically, the dissolution of the college seemed to unite the study of religion with other disciplines across campus, much like President Young’s original vision. “Since religious instruction no longer will be identified with a single college,” President Oaks stressed, “this new organization should result in increased concern and participation in the teaching of religion by faculty members in all of the academic colleges.” Full-time religion faculty were retained, President Oaks continued, to provide “the leadership and scholarship necessary to improve further our effectiveness in the teaching of religion.”[10]

Renamed Religious Education in 1983 to more accurately reflect outreach beyond the classroom, the entity itself remains somewhat atypical on campus. Religious Education is headed by a dean overseeing two departments, all without the designation of a college. The history of these titles is more than semantic, however. President Boyd K. Packer once observed, “Perhaps we needed the experience of having a college of religion. Certainly that experience will serve us for generations to come.”[11] Importantly, the change symbolizes religion’s place in Church academia. Elder Holland remarked, “With the disappearance of the College of Religion, I see a great opportunity. . . . to me it is a great new era to see the possibility of religious discussion permeating the university.”[12] Without the restriction of a college, Dean Holland summarized, Religious Education at BYU can assume its place as “the hub of the wheel of [the] university,”[13] an organization that orients all learning around a gospel center.