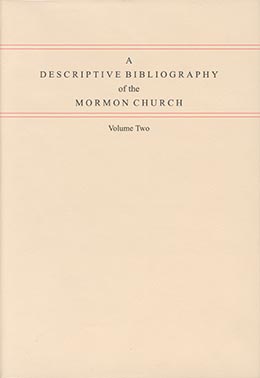 A Descriptive Bibliography of the Mormon Church, Volume 2

This volume continues the bibliography begun in volume 1 of the same title. It covers the period 1848–52, while a third volume will treat the years 1853–57. Maintained here are the conventions outlined in the preface to the first volume. In particular, the scope of the bibliography remains those books produced by Mormons in support of the Church, where the term book means any printed piece with one or more pages having text bearing on some Church issue and Church refers to The Church of Jesus Christ of Latter-day Saints with headquarters in Salt Lake City. Excluded are individual newspaper or magazine articles, maps, prints, bank notes, and ephemeral pieces such as printed forms or elders’ licenses.

Not always is it clear whether a particular piece meets these criteria, and in some instances I have included or excluded an item simply because of personal preference. I have included the Utah municipal documents, for example, because little separation existed between Church and state during the first ten years the Mormons were in the Great Basin, and I have added the Utah printed social invitations because of the glimpses they provide into the pioneer culture. On the other hand, I have excluded the unlocated Salt Lake City merchants’ advertisements as well as Almon W. Babbitt’s Council Bluffs newspaper the Western Bugle because these enterprises were independent from the Church.

The entries in this volume, as in the first, are listed chronologically with only a few exceptions—the numbering of the entries continuing that of the first volume. In a few instances I have listed several pieces together even though they were published at different times because a discussion of them as a group is more illuminating than scattered discussions of the individual pieces. This especially applies to the various editions of Orson Pratt’s 1848–51 series of pamphlets. All of the Liverpool editions of a particular pamphlet in this series are listed with the first edition and discussed together, including those published later than 1852.

A book’s citation in Chad J. Flake and Larry W. Draper’s new revised edition of A Mormon Bibliography 1830–1930 (Provo, 2004) is included at the end of the discussion of the book, followed by a list of institutional libraries that own an original copy—which should not be viewed as a definitive census. As in the first volume, the Welsh books are listed in their chronological order, without discussions, but with their citations in Ronald D. Dennis’s Welsh Mormon Writings From 1844 to 1862: A Historical Bibliography (Provo, 1988). In the case of the early Utah imprints, a third bibliography is cited: Richard L. Saunders’s Printing in Deseret: Mormons, Economy, Politics & Utah’s Incunabula, 1849–1851 (Salt Lake City, 2000).