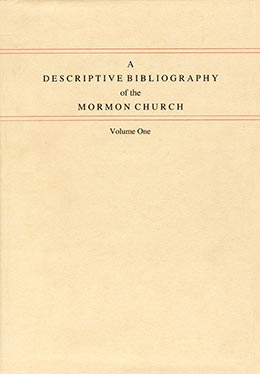 A Descriptive Bibliography of the Mormon Church, Volume 1

Thirty-four years ago, in the summer of 1963, 1 purchased a copy of Helen Mar Whitney’s Why We Practice Plural Marriage (Salt Lake City, 1884) from the Alta California Bookstore in Berkeley for $3.50, marking the beginning of my obsession with collecting Mormon books. After three or four years I began to write a paragraph or two about each of the books 1 had acquired. And a few years later when my friend and mentor Jean Wunderlich, one of the great collectors of Mormon Americana, suggested that I write an annotated bibliography of the early Mormon pamphlets, I expanded my writing project to include books I did not own.

This bibliography has evolved out of that effort. Its scope is the books produced by Mormons in support of the Church during the period 1830–57. Here Church refers to the Church of Jesus Christ of Latter-day Saints with headquarters in Salt Lake City. The term book means any printed piece with one or more pages having text bearing on some Church issue; it excludes individual newspaper or magazine articles, maps, prints, bank notes, and ephemeral pieces such as printed forms or elders’ licenses.

The bibliography is arranged chronologically. The first volume covers the years 1830–47; a second volume will cover 1848–57. As a general rule the books are entered by author and title; “official” publications of the Church are entered by title only. Title pages are faithfully transcribed, including the original punctuation, with two exceptions: quotations on the title pages are not given but are indicated by the number of lines in brackets, and no effort has been made to reproduce the use of capital letters so often employed by the nineteenth-century printers. Broadsides or broadsheets with no title are identified by the first few lines of print. The size of a book, given after its collation, is the vertical dimension of its pages, not of its binding, rounded up to the nearest half centimeter. Both vertical and horizontal dimensions are included in the case of a broadside or a broadsheet, again rounded up to the nearest half centimeter. Generally this measurement is for the tallest copy examined.

I have assumed that the reader has a basic knowledge of Mormon history and therefore have not added a historical overview of Mormonism. The books are the focus here, and in the discussions of them I have attempted to include enough background to make their historical contexts clear. In some instances—the broadsides bearing on the Kirtland bank, for example—I have given little in the way of a historical discussion because the events are well known and adequately treated in the scholarly literature. In others—for example, those pieces dealing with the British and American Commercial Joint Stock Company—I have included more historical details because they are not readily accessible elsewhere.

Concluding the discussion of a book is its citation in Chad J. Flake’s A Mormon Bibliography 1830–1930 (Salt Lake City, 1978) or his and Larry W. Diaper’s Ten Year Supplement (Salt Lake City, 1989), followed by a list of libraries which own an original copy. In general this census covers the major institutional Mormon collections, but it should not be viewed as definitive. Since Ronald D. Dennis has already described the early Welsh Mormon books in his Welsh Mormon Writings From 1844 to 1862: A Historical Bibliography (Provo, 1988), I have not duplicated his efforts here but have listed each Welsh item in its chronological order with a reference to the Dennis bibliography.

Three indexes follow the endnotes at the back of this book. The first is an author/short-title index to the entries in this volume. The second is an index to the biographical sketches scattered throughout the text and the endnotes. For the most part, sketches are not included for the Three Witnesses, members of the First Presidency, or members of the Twelve, since there is so much biographical material on these men. The third is a general subject index. Just preceding the indexes is a list of the codes for the libraries cited in this volume.

In addition I am grateful for the help of Kent P. Jackson and his associates in the Religious Studies Center, Sarah E. Beal, Erika A. Justis, Lisa M. Kurki, Charlotte A. Pollard, Jason O. Roberts, Ana N. Shaw, Charles D. Tate, Jr., and Benjamin B. Whisenant, in preparing the book for the press.