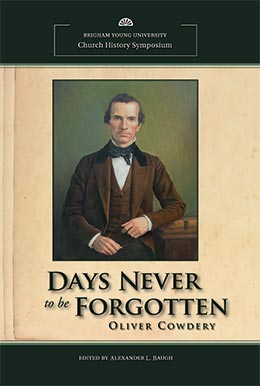 On December 23, 2005, I walked around the snow-packed grounds and property of the Joseph Smith Birthplace Memorial in Sharon, Vermont. Years earlier I had determined to be in Sharon on that date to commemorate the two hundredth anniversary of Joseph Smith’s birth, and now I was actually there! I spent about two hours at the site, reflecting on what that day must have been like two centuries earlier when twenty-nine-year-old Lucy Mack Smith delivered her fifth child, a son who would change the course of religious history.

It was about noon when I left the memorial. I anticipated that I would see a few more Vermont sites before nightfall (about five p.m.). I looked at my atlas, and several localities caught my eye—particularly Royalton and Tunbridge—communities just a few miles from Sharon where Joseph Sr. and Lucy Mack Smith lived for a time. After visiting these townships, it was midafternoon.

Where from here? I asked myself. Examining my atlas once again, my eyes focused on Rutland, a Vermont community of considerable size. From my years of teaching Church history, I remembered that Oliver Cowdery was born in Wells, Rutland County, Vermont, but because of travel schedules and the fact that Rutland County is out of the way, I had never taken the time to go there. I wondered whether I could make it to Wells before dark, but I chose to make the seventy-mile journey. Getting from Tunbridge to Wells is not a straight freeway shot. In fact, the entire distance consists of a winding two-lane highway with slower speed limits.

Nonetheless, I arrived at Wells around four p.m. with plenty of daylight left. I had read that the Church had placed a marker at the site of Oliver’s birthplace, so I figured some local person might have seen it and could give me directions on how to find it. Fortunately, that was the case because I never would have found it on my own. The person I asked said it was located a short distance from the town center, up an isolated, twisting dirt road. That was all I needed, and within a few minutes I was at the site. I parked the car off the side of the road and walked over to the marker, which stood adjacent to an old stone foundation, still clearly visible with the snow cover, and read the marker description.

When I read the opening line, “Oliver Cowdery, born here on 3 October 1806,” the year caught my eye. I thought, This year we are celebrating the two hundredth anniversary of Joseph Smith’s birth, but next year is the two hundredth anniversary of Oliver Cowdery’s birth. And then it hit me: Next year we need to honor Oliver! For me, this was indeed one of those “days never to be forgotten.”[1] 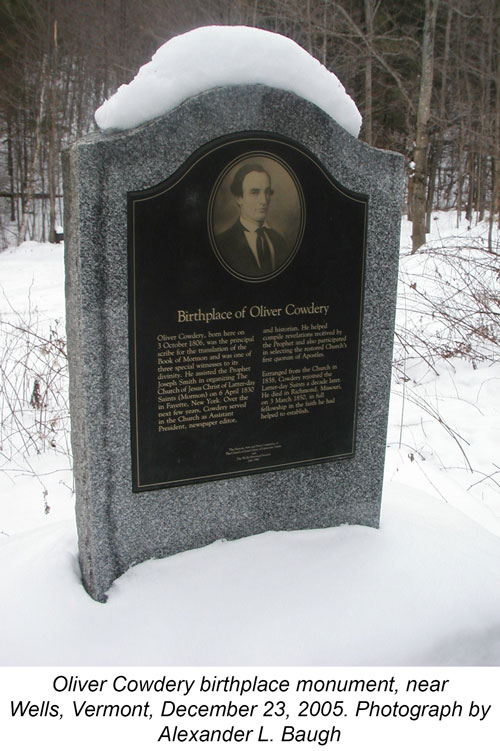 Soon after BYU’s 2006 winter semester began, I approached Paul H. Peterson, chair of the Department of Church History and Doctrine, and proposed having the department sponsor a symposium on the life and contributions of Oliver Cowdery. He was very supportive and encouraging, and within a short time the conference received approval from Religious Education and the university. The symposium, titled “Oliver Cowdery: Restoration Witness, Second Elder,” was held on November 10, 2006, on the BYU campus with the Mormon Historic Sites Foundation as cosponsor of the event. Presenters were specifically chosen among experts on the life and contributions of Oliver Cowdery and the early period of Church history.

The essays in this work were selected from the papers and presentations delivered at the symposium. We decided to include two additional papers that make a significant contribution to our understanding of Oliver Cowdery. The first is an essay by Ronald E. Romig, Community of Christ archivist, titled “Elizabeth Ann Whitmer Cowdery: A Historical Reflection of Her Life.” The second is by Brian C. Hales, an independent historian, titled, “‘Guilty of Such Folly?’: Accusations of Adultery or Polygamy against Oliver Cowdery.”

Elder Marlin K. Jensen, a member of the Presidency of the Seventy and Church historian and recorder, has expressed his gratitude for Oliver Cowdery’s contributions to the early Church. He writes: “Possessing the same New England heritage as Joseph Smith and being just a year younger, Oliver was chosen to stand at Joseph’s side during many of the miraculous events of the Restoration. With both voice and pen, he eloquently and courageously witnessed to the reality of those events. His support of Joseph and assistance with the leadership of the restored Church in its first decade helped lay a foundation of doctrine and practice that blesses Latter-day Saints to the present day. Oliver Cowdery deserves to be remembered and appreciated.”[2]

It is in that spirit of appreciation that this book is written and compiled. Indeed, Oliver deserves to be remembered.