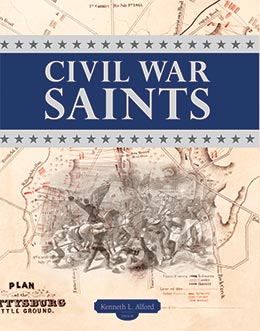 Ephriam D. Dickson III was the curator at the Fort Douglas Military Museum in Salt Lake City when this book was published.

In May 1864, First Lieutenant Thomas B. Gately received orders from the army’s quartermaster general instructing him to submit a map of Camp Douglas, together with descriptions and views of buildings at the post. Five months later, Gately submitted his detailed map together with seven photographs, the earliest known images of Camp Douglas. While he did not specifically mention the name of the artist responsible for these photographs, it is likely that they were taken by Private Charles D. Beckwith, a soldier in the Second California Cavalry who had opened a photographic studio at Camp Douglas. These images provide our first glimpse of the Civil War post as it was built by the California Volunteers. In August 1861, as the Civil War raged in the East, the secretary of war wrote to the governor of California asking that his state raise several additional regiments. Within several months, the Second California Volunteer Cavalry was formed, soon assigned to Colonel Patrick Edward Connor’s column bound for Utah. One of the soldiers who decided to enlist in the cavalry regiment was Charles D. Beckwith.

Born in about 1832 or 1833 in Broom County, New York, Beckwith left home in 1849 at the age of sixteen to try his luck in the California gold fields. Rather than making the long and difficult trek overland as many did, Beckwith chose to travel by sea. In Boston, he boarded the Areatus together with 21 crew members and 138 other miners as part of the Bay State and California Mining Company, departing in April. After 171 days at sea, rounding Cape Horn, he finally arrived in San Francisco in September 1849. Presumably, Beckwith worked in the gold fields but, like many, eventually decided to find other employment. He probably apprenticed in a photography studio. By 1858, he was operating his own daguerreian gallery in Yreka, California. He reportedly also did some work in Oregon and opened a studio briefly in Crescent City, California. In June 1859, he returned to Yreka, where he reopened his gallery, offering to produce portraits as daguerreotypes, ambrotypes, and melainotypes, along with “all the latest style of pictures.”[1]

With the Civil War now under way and California raising volunteer regiments, Beckwith decided to enlist. In September 1861, he turned over his Yreka studio to another photographer named S. T. Feen and headed for Fort Jones. On September 25, he raised his right hand and was sworn into the military for three years. He was assigned to Company M of the Second California Volunteer Cavalry. For the next eight months, the regiment drilled and trained at Camp Alert on the edge of San Francisco. In December 1861, Private Beckwith was transferred to the regimental band and designated as a musician third class.[2]

Headquarters and five companies of the Second California Volunteer Cavalry were assigned to the Utah column commanded by Colonel Patrick Edward Connor to protect the Overland Trail. Musician Beckwith was probably with regimental headquarters, commanded by Colonel Columbus Sims, when it departed Camp Alert in July 1862 and reached Fort Churchill the following month. About this time, Beckwith was seriously wounded. Many years later, he recalled that while watering his horse it suddenly jumped and threw him onto the pommel of his saddle; on another occasion, he said that as the horses rushed to water, his horse fell and rolled over him. In September 1862, he rejoined his original company at Camp Ruby in Nevada Territory, but his injury haunted him for the remainder of his life.[3]

Colonel Connor departed Camp Ruby with his column (including Company M with Private Beckwith) on October 2 and continued east along the Overland Trail, arriving in Salt Lake City on October 20, 1862. On the bench about three miles east of the city, the troops established Camp Douglas. Company M, under the command of Captain George F. Price, participated in the Bear River Massacre in January 1863 and three months later was transferred to Fort Bridger. Rather than departing with his company, Private Beckwith was temporarily assigned to regimental headquarters and remained behind at Camp Douglas. By November 1863, he was operating a photographic studio at the post. His advertisement in the garrison’s newspaper, the Union Vedette, advertised that he was “now prepared to take pictures, of all kinds in the daguerrean art, at prices to suit.” In the spring of 1864, as Lieutenant Gately prepared his map of Camp Douglas, Private Beckwith was probably contracted to produce a series of photographic images of the post.[4]

Private Beckwith remained at Camp Douglas until he was mustered out of the service on October 4, 1864, having completed his three-year enlistment. He initially went home to New York but returned to Salt Lake City two years later. In March 1867, Beckwith moved to Montana, where he worked as a prospector, a painter, and finally a bartender. In January 1886, Beckwith located in Littlefield, Idaho, and again took up his camera as a commercial photographer. He applied for a pension two years later, and by 1890 his health had deteriorated to such a degree that he was no longer able to work. Beckwith finally moved to Murray, Idaho, where he died on July 13, 1891.[5]

Charles D. Beckwith was one of thousands of soldiers who served at Fort Douglas. As the garrison’s first photographer, he left an important pictorial legacy for future generations. Perhaps one day additional photographs will come to light, but for now these seven images are all that we have of Camp Douglas as it appeared in 1864.

The original 1864 photographs are pasted onto Gately’s report accompanying Map #47, Fort Douglas, Miscellaneous Forts File, Record Group 77, National Archives. Duplicates of the images were made by the U.S. Army Signal Corps and are part of their collection now also at the National Archives. Copy prints of the Signal Corps photographs are available at many archives, including the Utah State Historical Society. They can be recognized by the Signal Corps numbers written in the bottom left corner of each image.

In this photograph, most of officers’ row is shown. The Post Headquarters, visible in the center, was a large whitewashed adobe building built in the fall of 1862 to serve both as the offices and as the residence for the post commander. Quarters for other commissioned officers in the command can also be seen. The partial dugouts were the first quarters, built in the fall of 1862, shortly after Camp Douglas was established. These primitive buildings were slowly replaced during the 1860s by more substantial above-ground log structures, each a duplex housing two officers and their families.

The enlisted men endured their first winter in tents. The following year, log barracks were constructed on the north and south side of the parade field, each housing one company. The frame structure visible in front of the barracks served as a warehouse for both the quartermaster and commissary stores at the post. Trees were planted around the parade field, many of which still survive today.

In this photograph, the additional enlisted barracks located on the north side of the parade ground are shown. The framed building on the left belonged to the civilian post sutler who operated a general merchandise store at the post. Private Beckwith’s studio was probably located near the sutler store but is apparently out of view in this image.

Along the western edge of the parade ground were three buildings: the guardhouse in the center, flanked by the ordnance storehouse and magazine. One of the enlisted barracks on the north side of the parade field can be seen in the background. The structure at the left edge of this photograph was the blacksmith shop.

Among the new buildings added to Camp Douglas in the fall of 1863 were two large adobe structures to serve as the offices and residence for the commander of the Department of Utah, Brigadier General Patrick Edward Connor. A third wing and a porch were later added. This building was later used as the post commander’s house until new quarters were built in 1875. One wing of the original adobe building survives today as an extension on the back of the new 1875 commanding officer’s quarters.

To the east of officer’s row stood another line of buildings, rude single-room log cabins to house the laundresses and the families of noncommissioned officers.

The easternmost row of buildings at Camp Douglas, built in the fall and winter of 1863, included the post hospital in the center, flanked by the surgeon’s quarters on the left and the commanding officer’s quarters on the right. This last building, also known as Building 55, became the quarters for the post quartermaster by 1866 and as NCO quarters in the 1890s. It still stands today, with minimal changes to its basic structure beyond a couple of later additions.