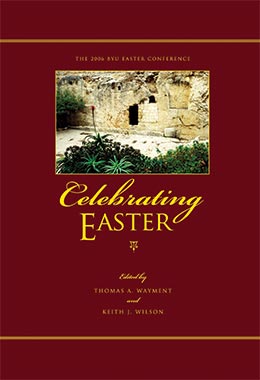 Of all the events in the Savior’s life—His birth, baptism, death, and Resurrection—early Christians likely celebrated the day of the Resurrection before anything else. This celebration was first carried out on a weekly basis, as reflected in the shift from Saturday worship services (the Jewish practice) to Sunday meetings (the Christian practice). Even before the early church officially changed to meeting on Sunday to commemorate the Resurrection, there was likely some recognition of the importance of Sunday.

As time progressed and early Christians began meeting every Sunday, they also began to celebrate and remember the actual day on which Jesus Christ was resurrected—the first Sunday of the Passover feast. Initially this celebration was closely linked with the date of the Jewish Passover, falling on the first Sunday of Passover, but in later decades as the Christian Church became more formally distinct from Judaism, Christians began celebrating the Resurrection of Christ according to their own calendrical calculations.

They remembered that Jesus was crucified on the eve of Passover, but because of certain peculiarities with the way the Jews managed their calendar, Christians felt that at times the celebration of the day of Jesus’s Resurrection might be off by several weeks. Therefore, they were careful to determine each year through episcopal and later papal decree—sometimes referred to as a festal letter—the exact date of the celebration of Christ’s Resurrection. It was so important to determine the correct date, in fact, that a sect of Christians known as the Quartodecimans were declared heretics by the orthodox church because they celebrated the Resurrection on a different day.

Initially this annual celebration was not named Easter. Christians in the East and West referred to the celebration using the term Pascha, derived from the Greek to pascha and the Hebrew term for Passover (pesah), a tradition that continues to this day (e.g. Latin, Paschalia; Italian, Pasqua; Dutch, Paschen). But beginning in the early Middle Ages, Christians in England began referring to the event under a new designation—Easter. In reality, only English speakers refer to the celebration of Christ’s Resurrection using the term Easter (though it is related to the German Ostem), a word that many feel has a pagan origin. The link between the earliest celebration associated directly with Passover and the modern celebration of Easter is often more evident in other societies, where the modern word still clearly reflects the Passover of Christ’s Resurrection.

It is safe to say without equivocation that the Resurrection of Christ, which signaled to all humankind that the Atonement was complete, is the most important event in the salvation of men and women and the cosmos itself. That is not to say, however, that the celebration of the event has always received sufficient attention. For a variety of reasons, Christmas and the attendant celebration of Christ’s birth have received the most attention in the modern era even though the celebration of His birthday was a significantly later development. Ironically, it was not Christ’s birth that saved us but His suffering, death, and Resurrection. If there had been no suffering and death, there would have been no forgiveness of sin. If there had been no empty tomb, there would have been no triumph over death, and therefore no Christianity.

Easter celebrations in other denominations take on a variety of forms. Some celebrate the entire Passion Week (the final week of Jesus’s life), which includes recognition of important events from that week: the Triumphal Entry (Palm Sunday), the Last Supper (Maundy Thursday), the Crucifixion (Good Friday), and the Resurrection (Easter Sunday). Other denominations begin the celebrations in February to celebrate Shrove Tuesday—the day before Ash Wednesday, when Lent begins—while some extend the celebration into May when they celebrate Pentecost, which occurs fifty days after Easter. For those unfamiliar with them, these celebrations may seem foreign even though each of them has a strong biblical precedent. The issue is even more pronounced in the western United States, where Good Friday is not typically observed as a public holiday. Many Christians attempt to extend the celebration of Easter in recognition of the importance of that day.

Though Latter-day Saints have not traditionally celebrated all of the events typically associated with Easter, these events are an important focus of the talks given in the spring general conference. Moreover, Latter-day Saints recognize the comparatively greater importance of the Resurrection of Christ in comparison to His birth even if their outward celebration of those two holidays does not reflect those sentiments. Easter will always have profound meaning for Latter-day Saints, and while we may never officially observe all of the events associated with the final week of His life as other Christians do, we join with them in celebrating the crowning achievement of that week—the Resurrection.

In 2003, the Brigham Young University faculty held its first conference on the life of Jesus Christ in an attempt to gather thoughts on the meaning of His life for us both as Latter-day Saints and as participants of a wider world. In conjunction with the conference, we published a book of collected articles focusing on the Savior’s final hours. After years of training and research, we hoped to be able to enter into the important academic discussion of Christ’s life with fresh insights and with the most recent archeological and textual discoveries. We stood on the shoulders of great men and women of our faith who had made this discussion possible, many of whom passed away before the Dead Sea Scrolls, the Nag Hammadi Codices, and other important discoveries had come to light. We wanted to renew their work again in our own day, adding to the discussion the knowledge of our time.

The first volume and the associated conference, which we held at BYU’s Salt Lake City extension center, were delightful successes, and many responded with positive notes and encouragement, some even suggesting that we should consider Jesus’s entire life anew. So we pressed forward in order to produce two more volumes on the life of Jesus, effectively covering His life from birth and to His final week to His Resurrection. The first book was republished as the third volume in the series; we entitled the whole The Life and Teachings of Jesus Christ.

Because of the overwhelmingly positive response and the need we had for larger facilities, we moved the conference to Provo to accommodate the growing crowds. The second conference was held in 2005 in conjunction with the publication of the second volume in the series. Again, the conference was an overwhelming success, and many offered words of encouragement and interest in the topics we had discussed. We realized at that time that there was a great interest in both the Easter season and in the possibility of meeting each year at that time to discuss the life of Jesus. We redoubled our efforts and produced the final volume in time to hold a third conference the following year, 2006, in conjunction with the publication of the last volume in the series.

But it occurred to us that holding the conference on Easter weekend also demanded that we speak of the Resurrection even though the publication that the conference celebrated discussed a wide variety of other important topics. Therefore, instead of focusing only on the topics we had published, we changed the focus to Easter and the Resurrection of Jesus Christ and planned to host an annual Easter conference at BYU.

This new conference would provide many opportunities for us to discuss the meaning of the Atonement and Resurrection of Jesus Christ in conjunction with our celebration of the days on which those events occurred historically. It was therefore unique in its scope and purpose because it would allow us to reflect on Jesus’s life at precisely the time of year when He offered His life as a sacrifice for us.

As the discussion of the importance of Easter began to take shape in our minds, we realized that the conference might help us begin to formulate our own unique approach to this important holiday. We invited talented speakers and scholars, giving each the opportunity to reflect specifically on Easter. We intentionally did not provide the presenters with their subjects; instead we wanted to see the direction they would take given the broad scope of the conference, named “The Brigham Young University 2006 Easter Conference.” In fact, we attempted to perform a study within a study—while the presenters studied Easter, we studied how a group of gifted and talented scholars approached this issue.

This volume is a collection of essays from the conference and reflects some of the ways in which we think about Easter. The presentations ranged from direct studies about how Latter-day Saints celebrate and teach Easter to technical aspects of the Savior’s trial and His Jewish antagonists’ approach to His miracles. In all, we realize that Easter is vitally important in our thinking and in our discussions of Jesus’s life, but for the most part, when it comes to speaking about Easter directly, we tend to discuss the details of Jesus’s life and ministry rather than the meaning of the Easter message directly.

The reasons for doing so are not negative. In reality, many prophets and apostles both modern and ancient have testified about the meaning of the Resurrection in our worship services. Further consideration on this topic may appear to some, therefore, to be unnecessary given the clear prophetic council on the subject. Pushing further in our scholarship on the subject may put us in the uncomfortable position of going beyond the revealed word of prophets and apostles. On the other hand, our outward celebration of Easter does not reflect our recognition of the importance of the event. So how do we as Latter-day Saints bring these two aspects of Easter into greater harmony?

One of the profound truths in this volume may be the simple fact that it does reflect the unique Latter-day Saint position on the subject: the Resurrection clearly announces that Jesus lives, that He has conquered death, and that He has authored our salvation. His life looks forward, but His death thrusts us back into His mortal life before He atoned for us. One of the uniquely Latter-day Saint views on the subject is that in commemorating the event we focus on new life and celebrate the continuing life of Christ. In other words, living the gospel in the present is a tribute to the true meaning and purpose of Easter. Further discussions may reveal whether that has been an intentional choice or whether it was achieved through default.

Whether we will ever recognize the traditional Christian calendar of events associated with Easter or whether we will ever even become familiar with its terminology is a poignant issue. However, the doctrine of Easter still permeates our thinking and scholarship. Some of the most recognized verses in all of modern canon reflect the triumph of Easter: “And now, after the many testimonies which have been given of him, this is the testimony, last of all, which we give of him: That he lives!” (D&C 76:22).