Council Bluffs—Off the Water at Last

Rejoicing was made difficult by the unfathomable sorrow which enshrouded the Welsh immigrants as they dragged themselves, literally, into the city of Council Bluffs. Many times while still in Wales and also during the crossing, they had reviewed with great anticipation what they would do when they reached Council Bluffs. Here was where the Buena Vista 249 would reunite with the Hartley 77 plus the babies that Ann Leigh, Mary Rees, Sarah Eames, and Letitia Thomas were likely to bring forth by then. Here was where the Welsh speakers would be surrounded by English speakers and where the former would need to begin studying their new language in earnest. Here was where some would begin immediate preparation to make the trek farther westward and where others would search out employment and begin their nest eggs toward their opportunity to complete the journey to the Salt Lake Valley. And here was where the constant swaying and rocking caused by the Atlantic, the Mississippi, and the Missouri would cease. 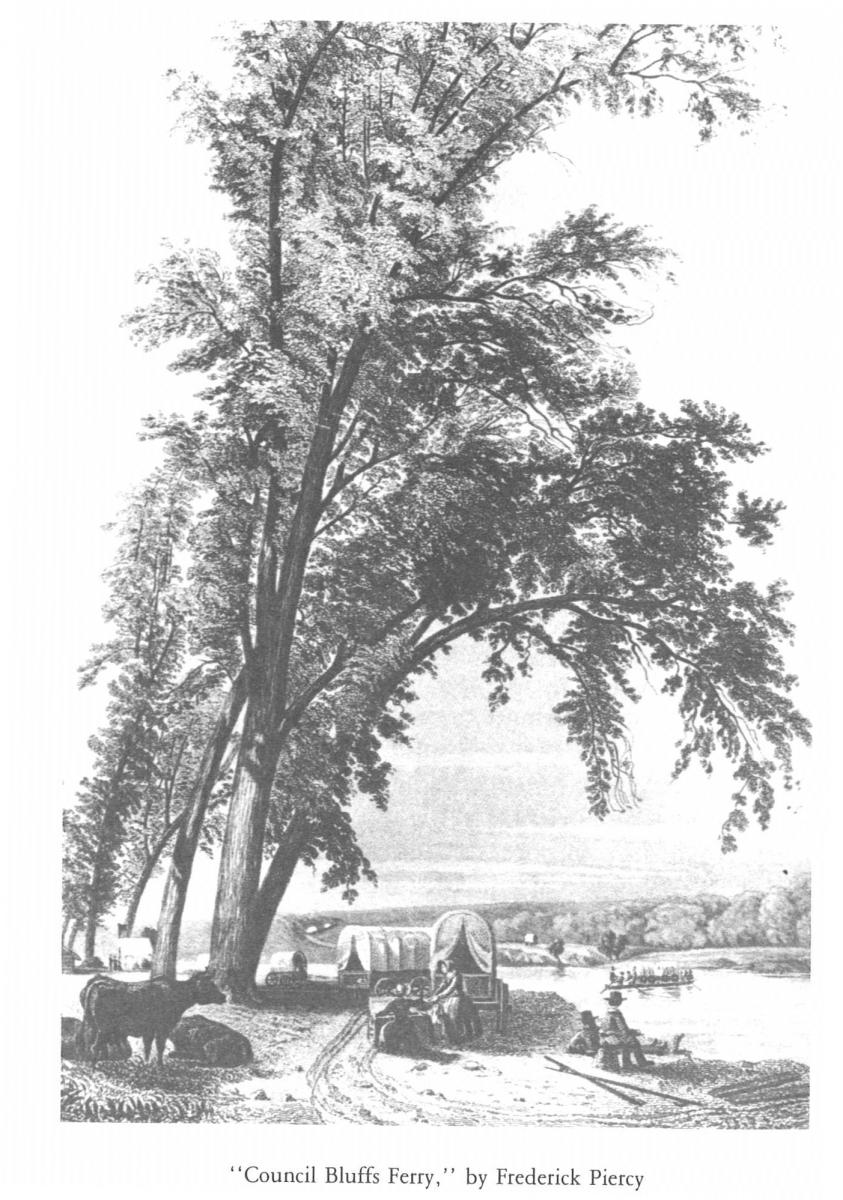 Many, however, were absent from the anticipated reunion. Nineteen had abandoned their belief in Mormonism and were searching for brighter horizons in St. Louis and in northwestern Missouri. Sixty-seven had died at various points along the way. [1] A number of the Hartley Welsh had remained at St. Louis to care for their sick. As for the expectant mothers, only two of the four, Mary Rees and Letitia Thomas, would live to see Council Bluffs. And just one of the babies would survive; little Hannah Maria Thomas, born 13 May 1849, was just four days old when her parents carried her ashore to Council Bluffs. Her maternal grandfather, Dan Davis, had been buried along the shores of the Missouri four days before Hannah Maria’s birth.

The need for preparations to get underway and for employment to be found loomed large. Recuperation and mourning were cruelly curtailed by the abrupt reality of the situation.

Insufficient housing was a chronic condition in this way station for the westbound Saints, but space was provided where there really was none by jamming several persons in the already overcrowded rooms. And when no cholera epidemic ensued in that area, fear was replaced by frontier hospitality and kindness.

Council Bluffs was becoming rather cosmopolitan with its English, Norwegians, and now a large band of Welsh. Interpreters were kept busy, as they provided the only way of communicating for many. The need for the Welsh to learn English was diminished by their banding together and by forming a Welsh-speaking branch of the Church, the first in that part of the world. [2] However, communication even between persons of the same language was often hampered by the sometimes frantic atmosphere of excitement.

Those who planned to cross the plains that season needed to arrange for wagons and teams if they expected to make it to Salt Lake City before the cold weather and the snow came upon them. Because of the great influx of immigrants, employment opportunities in the immediate vicinity were not plentiful; consequently, wives and families were often left in Council Bluffs while the men went as far as St. Louis to get work. Tempers were short as people agonized over their recent loss of loved ones and worried about what the future would bring. And, although the situation had become quite irreversible at this point, there were some who wished they had never left the comforts of home and family back in the old country.

Isaac and Eliza Nash together with Morgan and Margaret Hughes had been befriended by Father King at Council Point, not far from the river. Isaac’s and Eliza’s passages had been paid by Elizabeth Lewis from Kidwelly, South Wales, in exchange for a service which Isaac had performed for her-he had helped persuade her husband to sign papers allowing the sale to Lewis’s brother of a rather large inheritance. The money was then used to assist a number of people to emigrate (Nash, 5–6). Isaac had understood that Sister Lewis had agreed to pay for him and his wife all the way to the Rocky Mountains, but Sister Lewis informed him upon reaching Council Bluffs that he was then on his own. Nash, a blacksmith by trade, obtained work with a Brother Ovett at Council Point. Shortly thereafter, Captain Jones requested Nash’s services in ironing some wagons. Nash refused, wishing to honor his contract with Brother Ovett. The argument that ensued was solved only with the intervention of Apostle George A. Smith. Nash was to iron the wagons, shoe the horses, and do other work for the company; Jones was to allow Nash the use of a team and wagon filled with provisions until he reached Salt Lake City. In addition, Elder Smith purchased a set of blacksmith tools in St. Louis which he promised to Nash upon arriving at the end of the journey.

Misunderstandings arose also between Elizabeth Lewis and Phoebe Evans, a seventeen-year-old girl who served Sister Lewis as her maid in exchange for passage. Phoebe became so exasperated at demands made on her that she finally packed her belongings and went to live with her sister, Margaret Hughes, also a Buena Vista passenger. Dan Jones soon arrived at the house and declared that because Phoebe had not fulfilled her part of the agreement with Sister Lewis he would have to take her clothes and auction them off as restitution. And, according to David D. Bowen, who the following year married Phoebe Evans, the clothes were taken and sold (January 1850, 24).

Eight weeks were required for preparations to be completed for those who would continue directly on to the Salt Lake Valley. During this time approximately 200 Welsh were living in and around Council Bluffs. For the most part they banded together and offered mutual assistance. A special branch of the Church was set up to accommodate other Welsh Saints who would follow. William Morgan made coming to Council Bluffs sound very attractive in his letter dated 2 September 1849 to President Philips back in Wales:

This will be to the advantage of the monoglot Welshmen who follow; for there will be people of the same language and from the same country, and most likely many who will know them and have been associated with each other many times, to welcome them to this new country; for there are only Englishmen here for several hundreds of miles-and we, a small handful of Welsh in their midst, brothers and sisters, enjoying our freedom like the birds, with no one to say a word against us, but all of them very friendly. (Udgorn Seion, November 1849, 218, TD11)

Dan Jones had arranged for the Welsh who remained in Council Bluffs to have their lands adjoining; he then purchased a land claim of about 150 acres near the Welsh holdings and gave it to William Morgan to administer as a gift to the Welsh. Morgan reported an element of prosperity among the Welsh Saints: “Some in this company who had not a penny when they landed here have cattle and sheep now; in fact, I know of no family in this country who has not a cow or two” (Udgorn Seion, November 1849, 219, TD11). He offered encouragement to his brothers and sisters still in Wales to come and join in the abundance.

[1] These figures could be considerably higher. If accurate records of this period were kept, they have yet to surface.

[2] Many, such as Lowry Peters (H34), who lived another fifty-one years, would go to their graves as speakers of Welsh only.