From the Buena Vista to the Constitution—New Orleans to St. Louis

When the Buena Vista was dragged into New Orleans it was the first time for nearly all the passengers to behold the majestic Mississippi. One for whom it was something of a homecoming was their leader, Captain Dan Jones, who several years earlier had plied the Maid of Iowa on the river. This time, however, instead of transporting someone else’s converts upstream on his boat, he had to rely on someone else’s steamer to perform the task for his flock of faithfuls.

When Jones’s group docked at New Orleans, they discovered that they had caught up with the Saints on board the Ashland, a ship which had left Liverpool on 6 February 1849, nearly three weeks ahead of the Buena Vista. And since the two groups were headed in the same direction, Jones hired a steamer which both shared. 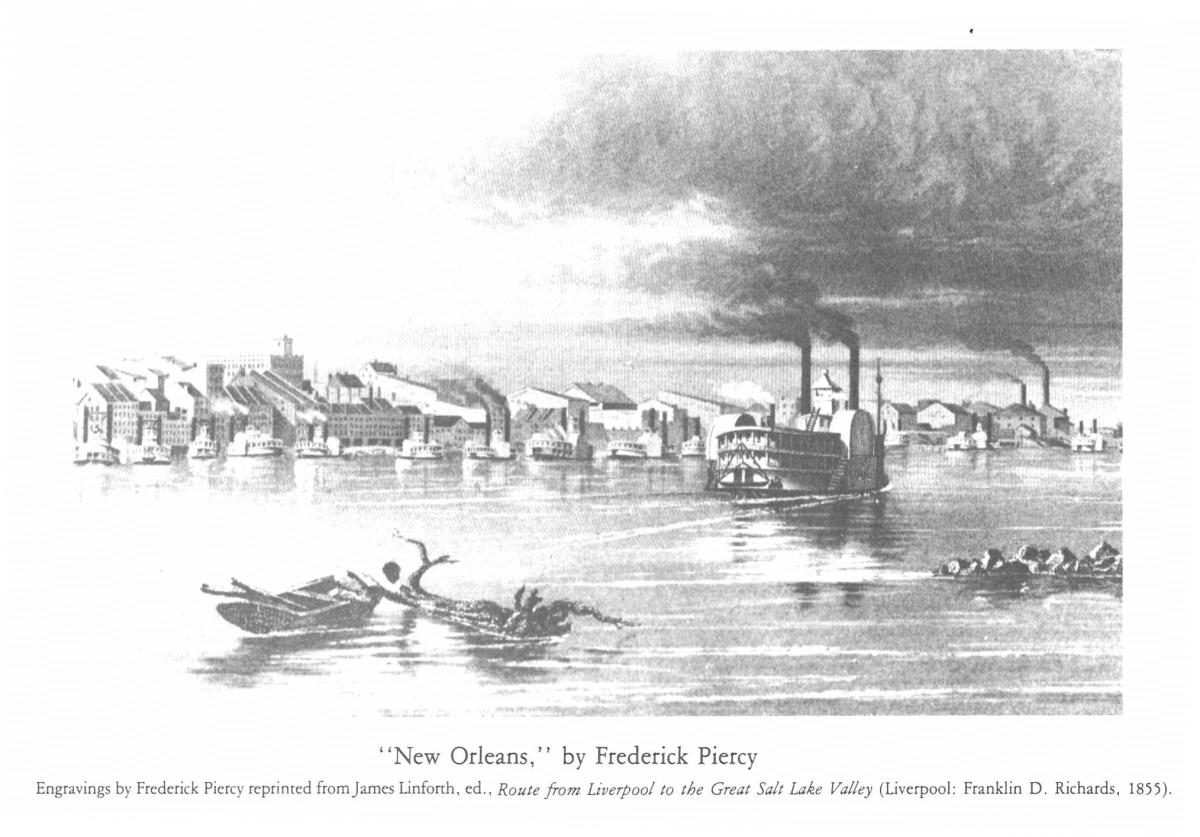 At the rate of $2.25 (about ten shillings) per person, the captain of the Constitution agreed to transport the combined group of nearly 450 passengers a distance of 1,100 miles up the Mississippi to St. Louis. He even agreed to pull alongside the Buena Vista in order to take the goods aboard his boat, and thus spared Jones’s group the expense of having their belongings moved from one vessel to the other.

The exact date of departure from New Orleans is not clear from the few sources which even mention the event. Because of the cholera in that city it was considered unwise to linger; thus, one would assume that after two or three days the company was on its way once again. There was a separation of eleven days between the arrival of the Buena Vista at New Orleans and the arrival of the Constitution at St. Louis. The brief voyage was apparently uneventful, for Dan Jones had little to say about it in the 30 April 1849 letter he wrote to William Phillips from St. Louis. A young child of Rees and Jane Price died of consumption on board the Constitution, and a baby boy was born to Samuel and Ann Leigh just two days before reaching St. Louis. From among the English Saints who had joined with the Welsh in New Orleans, three died of the deadly cholera. Jones emphasized how fortunate they were to lose so few: “The cholera is very bad in New Orleans, and many are dying on the steamboats along the rivers, especially the immigrants. On one ship which went before us there were forty-two who died from cholera; on their other journey, nineteen, etc. But they were not Saints.” Jones wrote of the surprise of the officers of the Constitution and quoted them as saying each morning: “‘Are there none of you dead yet?’“ (Udgorn Seion, June 1849, 122, TD9).

Although everyone feared the cholera, the Saints thought that their faith combined with the will of the Lord that they arrive safe at their destination would make them essentially immune. Jones pointed out that the ones who had suffered so terribly were not Mormons. The writer for the Cambrian back in Swansea had marveled at how confident the Latter-day Saints were of reaching the end of their journey completely intact, even the old and the infirm. And it was with obvious relief that Jones happily reported to William Phillips from St. Louis: “The Welsh Saints have come alive and healthy up to this point” (Udgorn Seion, June 1849, 122, TD9).

The lone exception was Jenkin Williams, a twenty-year-old engineer from Aberdare, who died within a few hours after arriving at St. Louis. However, Dan Jones was still optimistic as he informed President Phillips of the boy’s death: “[He] was a good and faithful lad the whole voyage, except that he went contrary to the counsels which were given, and he hid the cholera as long as he could by taking his own way to treat it through brandy. . . . A few minutes before he died, he left a remarkably good testimony after him and said that he was completely happy as he faced death” (Udgorn Seion, June 1849, 122, TD9).

And even though Mary Rees had a stillborn son the same day as Jones wrote his report to the Saints in Wales, he repeated his earlier comment about the general condition: “Everyone is healthy today and heartened and rejoicing in their privilege and desirous to move forward” (Udgorn Seion, June 1849, 122, TD9).

St. Louis was the place to purchase flour, meat and other groceries, and everything necessary for the trek to “California,” which would be initiated from Council Bluffs, the place where the immigrants gathered. Clothes, firearms, stoves, and even iron to make wagons were included in the buying spree. Jones was delighted that they could hold public meetings at any time they wished. When he had been in St. Louis in 1843 and 1844, “it was worth the life of a man to say that he was a Mormon” (Udgorn Seion, June 1849, 123, TD9).

The Highland Mary, the steamer which Jones contracted to transport the Saints up the Missouri River to Council Bluffs, had just barely returned from an earlier voyage to Council Bluffs. [1] Terms were still quite reasonable although a bit more expensive than passage on the Constitution. There was no charge for children aged three and younger; children between four and fourteen went for half price; all passengers fifteen and older paid the full fare of sixteen shillings eight pence. Each was entitled to one hundred pounds luggage at no extra charge: two shillings was the charge for each additional hundred pounds. The cost for making the journey up to this point had turned out to be about what Jones had calculated in his counsel to the emigrants in Prophwyd y Jubili five months earlier. 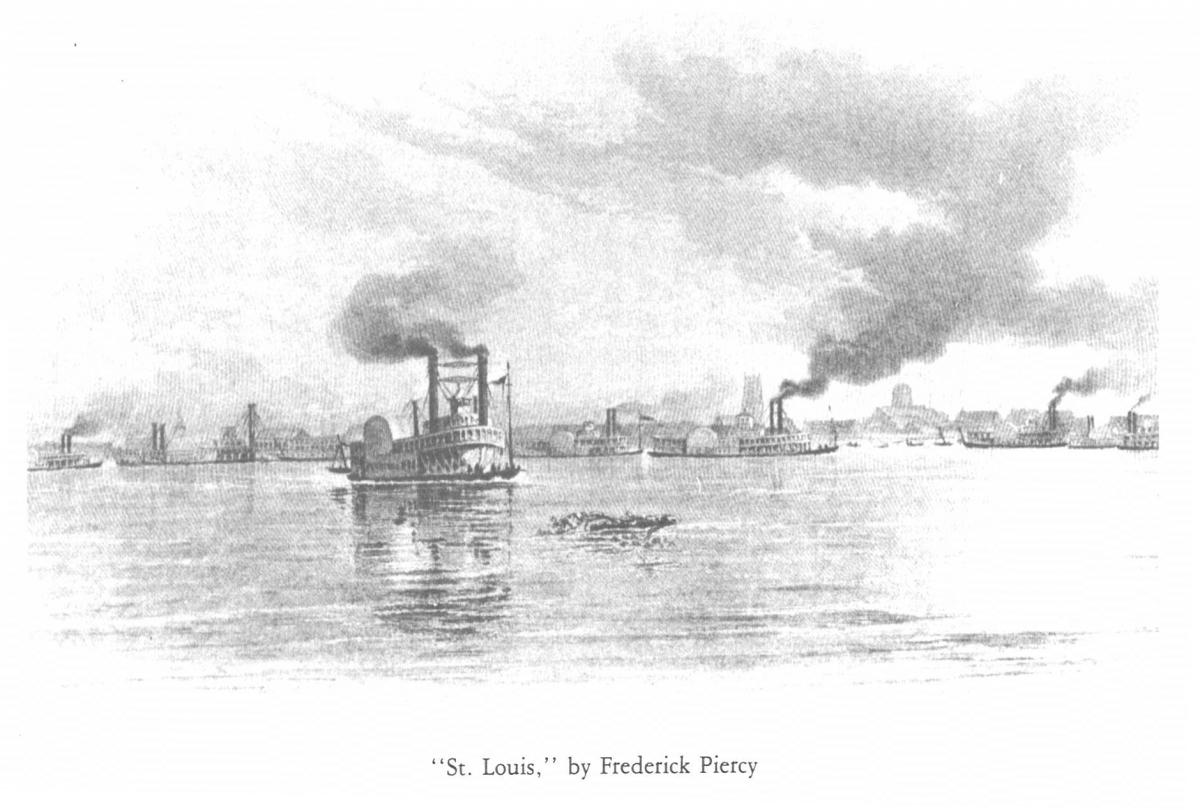 It was May Day 1849, and the Ashland Saints and the Buena Vista Saints were eager to complete the last leg of their sea-journey to Council Bluffs. The Highland Mary had pulled alongside the Constitution, and the goods were once again transported from one vessel to another at no expense to the passengers. Preparations were nearly complete, and the departure from St. Louis was set for the following day.

A few passengers, however, desired to seek other company at this point. Jones bitterly remarked in his letter to William Phillips that “Benj. Jones and his whole family except his wife became blemished from unfaithfulness. They went away along the road to destruction at a gallop today. David Giles and David Jones and his wife went with them, completely unknown to me. I shall take greater care next time to refrain from bringing any but the faithful Saints with me” (Udgorn Seion, June 1849, 123, TD9). It was Benjamin Jones’s son, William, and his daughter-in-law, Marian, who had been excommunicated while on board the Buena Vista just two weeks earlier. Benjamin Jones, in addition to his wife, Jane, had yet another son, Thomas, and daughter-in-law, Eliza, and grandson, John, traveling with him. Presumably all seven members of the family, including Jane despite her faithfulness, parted company in St. Louis with their traveling companions and were joined by three others. And, although Dan Jones did not give any further information concerning them, it is very possible that St. Louis had been their destination all along and that they were simply taking advantage of cheaper fares by joining the Church in Wales and traveling with the Mormons. If such were the case, they were certainly not the first to use this money-saving approach for reaching America.

The cholera had spread to St. Louis and had claimed many victims by this time. The second Welshman to die of this dread disease was Benjamin Francis, a forty-six-year-old blacksmith from Llanybydder. His death occurred the morning of 1 May. Jones referred to him as a “dear and faithful elder” and observed: “It would be difficult to find any more faithful than he in his life, and he died happy. His wife and children will come along with us” (Udgorn Seion, June 1849, 123, TD9). Benjamin and Margaret Francis had left Wales with four children; the widow Margaret Francis arrived at Council Bluffs in mid-May with only one child and unspeakable sorrow.

[1] See Ashton, 66, for a detailed explanation concerning the two steamers.