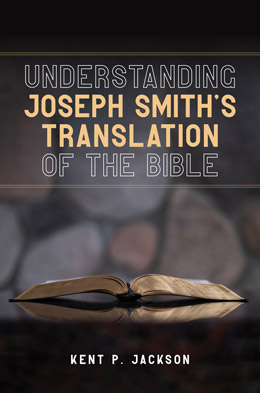 This book examines what the New Translation is (today most Latter-day Saints refer to it as the Joseph Smith Translation), what it contains, what it teaches, and how Joseph Smith arrived at its text. The author has written it with the intent to make the information accessible to scholars and general audiences alike and its chapters not only informative but also readable. Jackson is a believer in the prophetic mission of Joseph Smith and considers the New Translation and its story to be evidence of his divine calling. More importantly, however, is the message that is clear throughout the New Translation’s pages—that Jesus is the Christ, the Savior of the world.

For the most part we have good enough evidence to reconstruct the mechanical process by which Joseph Smith created his Bible revision, that is, the way he dictated the text and the way his scribes wrote it to create what is written on the existing manuscript pages. But behind the physical artifact, what were the means by which he came to the words that would become the New Translation? Did they come from his own experience, from assumptions he made while reading the Bible, or from other sources? Or did some or all the text come through revelation, as he and his followers believed? What were the instincts that guided his work, and how did he translate those instincts into words? This book cannot answer the theological questions, but it can assess the evidence in the primary documents in an effort to understand how the New Translation came to be.