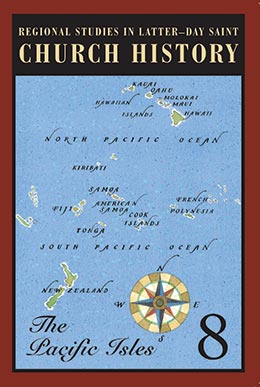 When most Latter-day Saints conjure up images of Church history, their minds are filled with pictures of the sacred sites and peoples of New York, Pennsylvania, Ohio, Missouri, Illinois, and Utah. But years before Brigham Young declared the Salt Lake Valley to be the site of future gathering in 1847, Church members had already pushed even further west into the Pacific Basin frontier. William Barratt made his way to Australia on a mission in 1840. Addison Pratt and his evangelizing companions arrived in the Society Islands in 1844, the year Joseph Smith was martyred in Illinois. And during the early 1850s, when Saints in the Utah Territory were clawing for their physical survival in American's Great Basin, missionaries enjoyed proselyting success among the native Sandwich Islanders in today's Hawaii. Clearly, the Pacific Isles have played a major—and early—role in the unfolding of the Restoration.

In preparation for the 2008 BYU Church History and Doctrine Department's regional studies tour to the Pacific Isles, faculty members were invited to research and write on the peoples and places of Polynesia, Micronesia, Melanesia, and Australasia. Topics include the introduction of the gospel to Tubuai, the influence of Jonathan Napela in Hawaii, the receptivity of Tongans to the gospel, the Oahu Tabernacle, the contributions of educational missionaries to Kiribati, the Mormon Tabernacle Choir's performances in the Pacific Islands, and the destruction fire in the Apia Samoa Temple, among others. Contributors are Reid L. Neilson, Arnold K. Garr, Fred E. Woods, Michael A. Goodman, Matthew O. Richardson, R. Devan Jensen, Dennis A. Wright, Megan E. Warner, Cynthia Doxey, Lloyd D. Newell, Richard O. Cowan, Scott C. Esplin, and Kip Sperry.