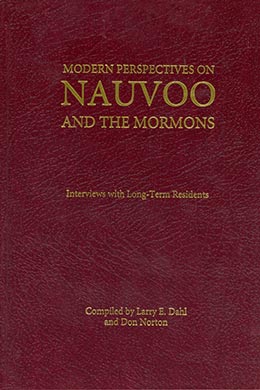 After the announcement of the intent to rebuild the Nauvoo Temple, there was much discussion in the town about why The Church of Jesus Christ of Latter-day Saints would want to build such a large building in such a small place and what impact it might have on Nauvoo. Questions were raised about the vast potential increase in the number of visitors to Nauvoo, as well as whether large numbers of Church members would come to settle in Nauvoo permanently, significantly affecting the political and cultural environment. Additional interest focused on the whole history of the Mormons in Nauvoo. Those ideas, attitudes, and feelings of residents were captured in this collection of interviews. Twenty-six Nauvoo residents were interviewed and their answers recorded in this volume.