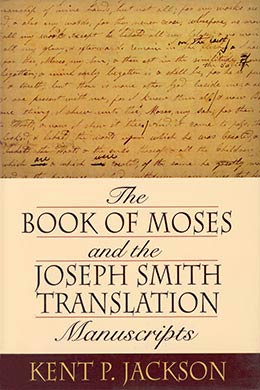 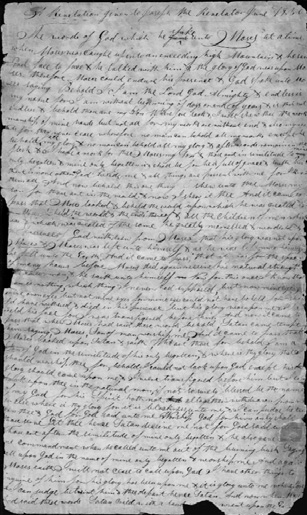 This book is a study of the text of Selections from the Book of Moses, an excerpt of Genesis from the Joseph Smith Translation of the Bible. Commonly called the Book of Moses, it is the first section in the Pearl of Great Price, one of the standard works of scripture of the Church of Jesus Christ of Latter-day Saints.

In June 1830, just two months after the Church was organized, the Prophet Joseph Smith was instructed by the Lord to begin a careful reading of the Bible to revise and make corrections to it as prompted by revelation. His work on the Bible, begun that month at the beginning of Genesis, extended through July 1833. Over the course of three years, the Prophet dictated 446 large manuscript pages to his scribes and made changes in about 3,400 verses of the Bible. [1] Some of the changes consist only of minor editing to the words of the existing King James translation, but other changes are additions of much new material. Today the resulting work is commonly called the Joseph Smith Translation (JST). The title Inspired Version refers to the edited, printed edition, published by the Community of Christ (historically, the Reorganized Church of Jesus Christ of Latter Day Saints [RLDS]). [2] The Prophet and his contemporaries referred to his Bible revision as the New Translation. [3] The Book of Moses is an excerpt from this work, the New Translation of Genesis 1:1–6:13.

The present study of the Book of Moses consists of three main parts. In “History of the Book of Moses,” I summarize briefly the story of the text from its origin in the Joseph Smith Translation through the various manuscripts and printings that constitute its rich and interesting history. In the “Historical Text,” I present the text of the Book of Moses as it is recorded on Joseph Smith’s final manuscript of this section of the New Translation, what is called Old Testament Manuscript 2. The transcription includes the strikeouts and insertions that document the work of the Prophet and his scribes. Extensive footnotes that identify the scribes and show the history of the words with the variant readings that are found in original manuscripts and later printings accompany the text. Finally, I present the “Manuscript Text” of the Book of Moses, the text as the Prophet Joseph Smith prepared it and left it to the Church. I have added modern spelling, capitalization, and punctuation to the “Manuscript Text.” A brief conclusion follows.

When Joseph Smith died in 1844, his widow, Emma Hale Smith, possessed the manuscripts of the New Translation. When the Church moved west with Brigham Young and the Twelve, she retained the manuscripts with her in Illinois, where she preserved them carefully for the next two decades. In the 1860s, the Reorganized Church of Jesus Christ of Latter Day Saints was established. Emma Smith Bidamon put the manuscripts into the care of her son Joseph Smith III, president of the newly established church, and since then they have been protected in RLDS archival facilities. Today they are housed in the Library-Archives of the Community of Christ in Independence, Missouri.

The manuscripts of the Joseph Smith Translation are among the foundational documents of the Restoration. Two excerpts, the Book of Moses and Joseph Smith—Matthew, are parts of our canonized scripture. Unfortunately every Latter-day Saint printing of those texts from the 1851 original edition of the Pearl of Great Price to the present was accomplished without access to the original manuscripts. Those who worked on the editions could rely at best only on imperfect handwritten or printed copies, or copies of copies, rather than on the texts that were prepared by the Prophet. As a result, in many places the words today differ from how they were left to the Church by Joseph Smith.

In the year 2004, the Religious Studies Center at Brigham Young University published Joseph Smith’s New Translation of the Bible: Original Manuscripts. [4] That volume includes carefully prepared transcriptions of all the original manuscript pages of the Joseph Smith Translation. Prior to its publication, leaders and members of the Church of Jesus Christ of Latter-day Saints, with very rare exceptions, did not have access to the original documents. Because of the gracious cooperation that Latter-day Saint scholars received from the Community of Christ in preparing that publication of the original manuscripts, Latter-day Saints can now study for themselves the texts as they were dictated by the Prophet Joseph Smith and recorded by his scribes. The access that we now have has allowed us to obtain a much better understanding of many questions relative to the New Translation, including how it was accomplished, who the scribes were, when it was done, and how the text was intended to be read and understood.

Most important is the fact that we now have access to the revealed text itself, which we did not have before, and we can examine the words as they were recorded when they first came from the inspired lips of the Prophet. We are in a new day, a day of closer access to one of the great fruits of the Restoration—an important branch of Joseph Smith’s calling, as he designated his inspired work on the Bible. [5] With our ability now to examine the original documents closely, we can express our thanks to a loving God who has provided that “righteousness and truth” would “sweep the earth” in the last days (Moses 7:62), a loving God who said concerning the Joseph Smith Translation, “The scriptures shall be given, even as they are in mine own bosom, to the salvation of mine own elect” (D&C 35:20).

This book is not a publication of the Church of Jesus Christ of Latter-day Saints, and the conclusions presented in it are my own. I would like to express my thanks to student assistants who contributed significantly in the preparation of the book and to my wife, Nancy Jackson, without whose efforts it would not have been possible. I express my thanks also to colleagues at Brigham Young University and especially to Robert J. Matthews, for his keen interest in this work and his ongoing counsel and encouragement.

[2] First published in 1867 as The Holy Scriptures, Translated and Corrected by the Spirit of Revelation. By Joseph Smith, Jr., the Seer. (Plano, IL: The [Reorganized] Church of Jesus Christ of Latter-Day Saints, 1867). The most recent edition was published in Independence, Missouri, in 1991. In 2001 the RLDS Church changed its name to the Community of Christ.