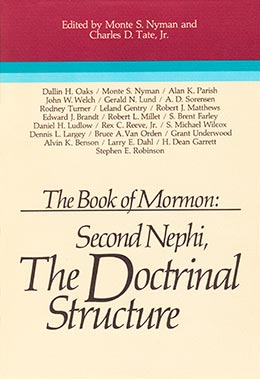 The Book of Mormon: Second Nephi, the Doctrinal Structure

The Name Jesus Christ Revealed to the Nephites

The Book of Mormon is heralded to the world as “Another Testament of Jesus Christ” (Packer 53). Its title page declares that among other reasons it was given for “the convincing of the Jews and Gentiles that Jesus is the Christ.” The use of the sacred name of Christ in a record of Hebrew origin (see 1 Nephi 1:2; Mosiah 1:4; and Mormon 9:32–34) is of some unusual significance since the name, Jesus Christ, is of Greek derivation. The English form Jesus is a transliteration via Latin and Greek of the Aramaic name Yeshua given him at birth. [1] The older Hebrew form, Joshua in English, originally meant “Savior” (Talmage 35). The title Christ is an English transliteration via Latin of the Greek translation of the ancient Hebrew title “the Anointed One” (Grundmann 493–509; Durham 16). The direct English transliteration of that Hebrew term is Messiah (Durham 15; Talmage 35–36).

Did the Prophet Joseph Smith, as translator, substitute these later and more familiar names and titles, or were they terms precisely known and used by the Book of Mormon prophets? If they knew, how did they come to know them? Those names were supposed to be of much later usage. The record itself reveals the remarkable way the ancient prophets learned these terms. All the scriptures contain many names and titles for the Messiah. The Book of Mormon alone provides over 100 names and titles for Christ (Easton 60–61). However, the name “Christ” does not appear until Jacob’s sermon to the Nephites in 2 Nephi 10:3:

Wherefore, as I said unto you, it must needs be expedient that Christ—for in the last night the angel spake unto me that this should be his name—should come among the Jews, among those who are the more wicked part of the world; and they shall crucify him—for thus it behooveth our God, and there is none other nation on earth that would crucify their God. (emphasis added)

The names most frequently used before that verse are God, Lord, Lord God, Lord of Hosts, Holy One, Holy One of Israel, Messiah, Rock, Redeemer, Lamb of God, Stone, Savior, Creator, Mediator, Son of God.

Jacob had seen the Savior as a youth and on a later occasion reaffirmed his experience of receiving the ministering of angels (2 Nephi 2:3–4; Jacob 7:5; compare Moroni 7:22). The language of this manifestation uses the future designation of the term Christ for covenant Israel.

The name Jesus first appears in the Book of Mormon in 2 Nephi 25:19. As Nephi was teaching the people concerning the Jews and their eventual acceptance of the Messiah, he declared:

And after they have been scattered, and the Lord God hath scourged them by other nations for the space of many generations, yea, even down from generation to generation until they shall be persuaded to believe in Christ, the Son of God, and the atonement, which is infinite for all mankind—and when that day shall come that they shall believe in Christ, and worship the Father in his name, with pure hearts and clean hands, and look not forward any more for another Messiah, then, at that time, the day will come that it must needs be expedient that they should believe these things.

Wherefore, he shall bring forth his words unto them, which words shall judge them at the last day, for they shall be given them for the purpose of convincing them of the true Messiah, who was rejected by them; and unto the convincing of them that they need not look forward any more for a Messiah to come, for there should not any come, save it should be a false Messiah which should deceive the people; for there is save one Messiah spoken of by the prophets, and that Messiah is he who should be rejected of the Jews.

Here Nephi acknowledges that through the ministry of an angel it was revealed to him that in the future “his name shall be Jesus Christ, the Son of God.” Verse 19 contains both the English transliteration of the Hebrew term for “the anointed one”—Messiah—and also the transliteration of the Greek term extended to the English for “the anointed one”—Christ.

The continued use of the name Jesus Christ in the Book of Mormon, in view of all the other names and titles used in the scriptures, shows it had an important influence on the Nephites throughout their history. Centuries later the prophet leader Benjamin taught what the future name of the Lord would be:

And he shall be called Jesus Christ, the Son of God, the Father of heaven and earth, the Creator of all things from the beginning; and his mother shall be called Mary. (Mosiah 3:8, emphasis added; see also Mosiah 4:3)

King Benjamin further taught that a special name should be bestowed upon all the faithful who made covenants with the Lord (Mosiah 1:11), and later he identified what the name would be:

Therefore, I would that ye should take upon you the name of Christ, all you that have entered into the covenant with God that ye should be obedient unto the end of your lives.

And it shall come to pass that whosoever doeth this shall be found at the right hand of God, for he shall know the name by which he is called; for he shall be called by the name of Christ. (Mosiah 5:8–9)

Other Book of Mormon prophets also bore testimony that the Savior would be known by these names in future records. Abinadi testified before the wicked priests of Noah concerning the resurrection of Christ, “for so shall he be called” (Mosiah 15:21). The prophet Alma (formerly one of Noah’s priests) organized those who entered the gospel covenant of baptism, and they were called “the church of God, or the church of Christ, from that time forward” (Mosiah 18:17; see also 26:18, 24). In teaching the people, he often reminded them of the future atonement and mission of this Christ (see Alma 5:48; 6:8; 7:11–13; 45:4 [his son Alma]).

The effect of calling the members of the church after this future title—Christ—led to calling them as “Christians.”

And those who did belong to the church were faithful; yea, all those who were true believers in Christ took upon them, gladly, the name of Christ, or Christians as they were called, because of their belief in Christ who should come. (Alma 46:15; emphasis added)

The Savior continued to use this designation during his ministry to the Nephites for all those who covenanted in the newly established order of the kingdom. “And they who were baptized in the name of Jesus were called the church of Christ” (3 Nephi 26:21). When the question arose about what name to call the Church, the Lord reaffirmed the use of the name he would be best known by. He instructed the Nephites that this would be the case particularly for those who had taken his name upon them if they were to be found faithful and worthy at the judgment day.

Have they not read the scriptures, which say ye must take upon you the name of Christ, which is my name? For by this name shall ye be called at the last day;

In declarations of God to the prophets through the ages, the name most universally known to the children of men is the name-title Jesus Christ. With the restoration of the “Church of Christ” (D&C 20:1) in this dispensation through the ministry of the Prophet Joseph Smith, the Lord instructed the use of this sacred name-title in the restored Church.

For thus shall my church be called in the last days, even The Church of Jesus Christ of Latter-day Saints. (D&C 115:4)

Those who question or find fault with the ancient use of the New Testament equivalents of the name of the Redeemer in the Book of Mormon have neglected to consider its account of how this name-title was revealed to the Nephite prophets. They delighted to teach and testify of Christ.

And we talk of Christ, we rejoice in Christ, we preach of Christ, we prophesy of Christ, and we write according to our prophecies, that our children may know to what source they may look for a remission of their sins. (2 Nephi 25:26; see also v. 23)

[1] Transliteration is the transfer of letter equivalents from one language to another, often involving a different alphabet for each language used (i.e. Aramaic to Greek, Greek to Latin, and then Latin to English). See Matthew 1:21, 25; Luke 1:31 and 2:21. The Greek form has been shown to be “centuries” older than the Christian era (see Foerster 3:284–93).