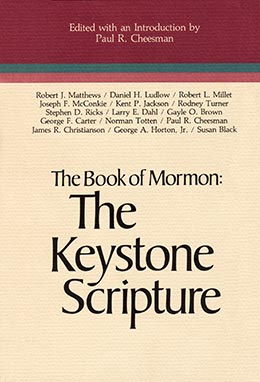 The Book of Mormon: The Keystone Scripture

Fasting in the Book of Mormon and the Bible

Stephen D. Ricks was an assistant professor of Hebrew at Brigham Young University when this was published.

For Latter-day Saints, a natural part of every month is fast Sunday, when they abstain from food and drink for two meals, contribute a fast offering from the money saved by fasting (if not contributing more than that), and join with others in worship and in bearing witness to the truth. On other occasions, special needs will also warrant fasting: an illness, preparation for giving or receiving a priesthood blessing, a vital decision, or a persistent dilemma. The practice of fasting, so significant and cherished a part of the Latter-day Saint religious life, is also abundantly attested in ancient Israel and in the Book of Mormon.

Fasts may be individual and private or communal and public; they may be periodic and institutionalized (e.g., in our own practice, fast Sunday) or spontaneous (i.e., fasts which are not explicitly prescribed). Among the ancient Israelites and the Nephites, all of these types of fasting are attested, and will be considered in this paper.

The only periodic fast prescribed for the Israelites in the Pentateuch (the five books of Moses) occurs on the Day of Atonement, “the tenth day of the seventh month” of the ancient Jewish calendar (the first month of the current Jewish calendar), when the Lord commanded the Israelites to meet together to “afflict [their] souls” (i.e., to fast) and to “offer an offering made by fire unto the Lord” (Leviticus 23:27ff.; see also 16:29, 31; Numbers 29:7–10). There are no references to this festival in the Old Testament outside of the books of Moses, although Isaiah 58:3–7 may refer to abuses of the fast associated with the Day of Atonement.

The observance of the Day of Atonement fast is never explicitly mentioned in the Book of Mormon. However, its observance may be implied in Alma 30:2, where fasting, mourning, and prayer are referred to, and in Alma 45:1, where fasting, rejoicing, and prayer are mentioned as taking place at the beginning of the year, at the time when the Day of Atonement rites were probably observed among the Nephites. This presumption that these two fasts reflect observances associated with the Pentateuch is, I think, strengthened by the observation in Alma 30:3 (following the mention of fasting and associated rites) that “the people did observe to keep the commandments of the Lord; and they were strict in observing the ordinances of God, according to the law of Moses; for they were taught to keep the law of Moses until it should be fulfilled.” [1]

Four periodic fasts commemorating events surrounding or immediately following the destruction of the kingdom of Judah by the Babylonians are mentioned in Zechariah 7:5 and 8:19: (1) the fast that was held to observe the beginning of the siege of Jerusalem by Nebuchadnezzar on the tenth day of the tenth month (Tebet) in the ninth year of the reign of Zedekiah (cf. 2 Kings 25:1; Jeremiah 39:1); (2) the fast commemorating the breach of the wall of Jerusalem on the ninth day of the fourth month (Tammuz) in the eleventh year of Zedekiah’s reign (Jeremiah 39:2, 52:6–7); (3) the fast memorializing the destruction of the temple on the tenth day of the fifth month (Ab) in the nineteenth year of Nebuchadnezzar’s rule (cf. Jeremiah 52:12–13; 2 Kings 25:8–9); (4) the fast commemorating the murder of the Babylonian puppet Gedaliah on the third day of the seventh month (Tishri; cf. 2 Kings 25:24–25; Jeremiah 41:1). Since all of these fasts commemorate events during the Babylonian conquest, the destruction of Jerusalem and afterwards (i.e., in the period immediately following the departure of Lehi’s family from Jerusalem), they are, understandably, without parallels in the Book of Mormon.

Both the Bible and the Book of Mormon record instances of fasting as a sign of mourning following a death. After the defeat and death of Saul and his sons, the men of Jabesh Gilead fasted seven days (1 Samuel 31:13; 1 Chronicles 10:12 1 Chronicles 10:12), as did David and his companions (2 Samuel 1:12). Similarly, public fasting occurs in the Book of Mormon in conjunction with prayer and mourning after the murder of the chief judge Seezoram (Helaman 9:10). No specific reason is mentioned in the Book of Mormon for these prayers, but they may have been to obtain solace for the living rather than mercy for the dead. Individual fasting following a death is also attested in ancient Israel (2 Samuel 3:35).

The practice of fasting as a sign of mourning following a death appears to have been a customary feature of pre-exilic Israelite religion (cf. 1 Samuel 31:13; 2 Samuel 1:12; 3:35; 1 Chronicles 10:12 1 Chronicles 10:12). However, the practice is not recorded for the post-exilic period or in the New Testament. It is also of importance that fasting as a sign of mourning is recorded in the Book of Mormon only in pre-Easter passages (so Helaman 9:10), but never following the appearance of the risen Christ to the Nephites.

Fasting as an act preparatory to seeking the gifts of the Spirit can be seen in the account of the sons of Mosiah, who had given themselves “to much prayer, and fasting; therefore they had the spirit of prophecy, and the spirit of revelation” (Alma 17:3, 9; see also Alma 5:46, 8:26). In a slightly different vein, Moses fasted on the mountain for forty days when receiving the Ten Commandments (see Exodus 34:28; Deuteronomy 9:9), Saul fasted before visiting the witch of Endor (1 Samuel 28:20), and Ahab and Jezebel proclaimed a public fast in anticipation of the trial of Naboth (1 Kings 21:9, 12).

Fasting as a religious exercise

Fasting for no explicit reason is not attested in the Old Testament before the Babylonian exile. However, this practice burst into full bloom during the early pre-Christian centuries, and is frequently mentioned in the intertestamental literature and in the New Testament (cf. Testament of Joseph 3:4; 9:2; Judith 6:8; Luke 2:36–38). It was probably against hypocritical fasting of this sort that Jesus inveighed: “Moreover when ye fast, be not, as the hypocrites, of a sad countenance: for they disfigure their faces, that they may appear unto men to fast. . . . When thou fastest, anoint thine head, and wash thy face, that thou appear not unto men to fast, but unto thy Father which is in secret” (Matthew 6:16–18). (This does not, I believe, represent a rejection of fasting as such, but rather a condemnation of its improper practice.) To an extent, this fasting had itself become somewhat institutionalized, and was observed on a regular basis by the Pharisees and possibly also by the disciples of John the Baptist. The Pharisee in Jesus’ parable was probably referring to such a practice when he boasted, “I fast twice in the week” (Luke 18:12). Both later Jewish and Christian traditions agree in identifying these two days as Monday and Thursday. [2] The New Testament makes no specific mention of fasts regularly observed by the primitive Christian community. However, the Didache, or teaching of the twelve apostles, dating from about A.D. 100 and giving one of the earliest post-New Testament glimpses of the life of the Church, provides for two fasts each week, on Wednesday and Friday, and not on Monday and Thursday “with the hypocrites” (i.e., the Pharisees, or possibly the Jews in general). [3] The pre-Easter portions of the Book of Mormon contain three references to such a practice among the Nephites (Omni 1:26; Alma 6:6; Helaman 3:35), the last two in conjunction with communal worship. After the appearance of the risen Christ to the Nephites, the only mention of fasting in the Book of Mormon is as a devotional exercise in the worship of the Christian community (3 Nephi 27:1; 4 Nephi 1:12; Moroni 6:5).

There are several references in the Old Testament (but, again, none in the New Testament) to the practice of penitential fasting. After commanding the Israelites to “put away the strange gods and Ashtaroth from among [them],” Samuel ordered them to gather at Mizpeh. “And they gathered together to Mizpeh, and drew water; and poured it out before the Lord, and fasted on that day, and said there, We have sinned against the Lord” (1 Samuel 7:3–6). Even Ahab, when he heard the prophecy of doom pronounced against him by Elijah, “rent his clothes, and put sackcloth upon his flesh, and fasted, and lay in sackcloth, and went softly” (1 Kings 21:27). In response to these evidences of penitence, the Lord told Elijah: “I will not bring the evil in his [Ahab’s] days: but in his son’s days will I bring the evil upon his house” (1 Kings 21:28–29; cf. also Deuteronomy 9:18; Ezra 10:6; Nehemiah 9:1; Joel 1:14, 2:12–17; Jonah 3:5–9).

Fasting as a sign of mourning following a calamity besides death is attested in ancient Israel but is not found in the Book of Mormon. When Saul threw a javelin at his son Jonathan for having defended David, “Jonathan arose from the table in fierce anger and did eat no meat the second day of the month: for he was grieved for David, because his father had done him shame” (1 Samuel 20:34). Similarly, following the unexpected discomfiture of the Israelites by the people of Ai, Joshua and the elders of Israel fasted and lay prostrate before the ark of the Lord until evening (see Joshua 7:6).

In preparation for a battle against the Philistines, Saul forbade his soldiers to eat until evening “that I may be avenged on mine enemies” (1 Samuel 14:24). Jonathan disobeyed his father’s directive at his peril.

In summary, recorded instances of fasting in the Old Testament and in the pre-Easter sections of the Book of Mormon show numerous sources of motivation, but communal fasting as a religious act plays a relatively minor role. By the time of Christ, however, religious devotion had become a major motive for fasting, and remained so both in the primitive Church in Palestine and in the Christian community in the New World.

[1] I owe this insight to my friend Gordon Thomasson who deals with this and related subjects in his unpublished paper “Expanding Approaches to the Book of Mormon: Pre-Exilic Israelite Religious Patterns.”