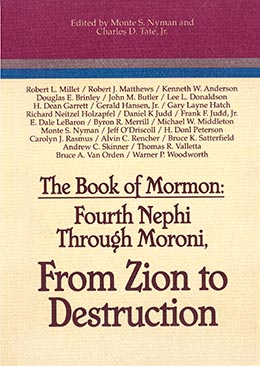 The Book of Mormon: Fourth Nephi Through Moroni, From Zion to Destruction

This ninth volume is the final volume in the Book of Mormon Symposia Series. In October 1985, under the direction of the late Professor Paul R. Cheesman, a general symposium on the Book of Mormon was held on the Brigham Young University Campus. Selected papers from that symposium were published in The Book of Mormon: The Keystone Scripture, the first one of this series. It contained the following papers in order of appearance:

The Challenge of the Book of Mormon, Daniel H. Ludlow

What the Book of Mormon Tells Us about Jesus Christ, Robert J. Matthews

The Ministry of the Father and the Son, Robert L. Millet

A Comparison of Book of Mormon, Bible, and Traditional Teachings on the Doctrines of Salvation, Joseph F. McConkie

The Beginnings of Christianity in the Book of Mormon, Kent P. Jackson

Fasting in the Book of Mormon and the Bible, Stephen D. Ricks

Love in the Book of Mormon, Gayle O. Brown

Cultural Parallels between the Old World and the New World, Paul R. Cheesman

Book of Mormon—Transmission from Translator to Printed Text, George A. Horton, Jr.

“Lest Ye Become As the Nephites of Old,” Susan Black

Professor Cheesman retired after that first symposium and Professor Monte S. Nyman was made director of the Book of Mormon area of the Religious Studies Center, and he proposed continuing the symposia by going through the Book of Mormon in sections. Consequently, the second symposium was held in October 1986 and the subject was the book of 1 Nephi. The following selected papers were published in the second volume of the series, in First Nephi, The Doctrinal Foundation:

The Book of Mormon: A Great Answer to “The Great Question,” Elder Neal A. Maxwell

The Calling of a Prophet, John W. Welch

“Behold, I Have Dreamed a Dream,” Susan Easton Black

The Mysteries of God Revealed by the Power of the Holy Ghost, Gerald N. Lund

Establishing the Truth of the Bible, Robert J. Matthews

A Land of Promise, Choice Above All Other Lands, Philip M. Flammer

The Prophecies of the Prophets, Robert E. Parsons

Textual Evidences for the Book of Mormon, Paul Y. Hoskisson

B. H. Roberts: The Book of Mormon and the Atonement, Truman G. Madsen

The third symposium was held in October 1987 and the papers in volume 3, Second Nephi, The Doctrinal Structure, were as follows:

Lehi and the Covenant of the Promised Land: A Modern Appraisal, Alan K. Parrish

Lehi’s Last Will and Testament: A Legal Approach to 2 Nephi 1–4, John W. Welch

The Fall of Man and His Redemption, Gerald N. Lund

Lehi on God’s Law and an Opposition in All Things, A. D. Sorensen

God Will Fulfill His Covenants with the House of Israel, Leland Gentry

The Influence of the Brass Plates on the Teachings of Nephi, Robert L. Millet

The Message to the Jews with Special Emphasis on 2 Nephi 25, Daniel H. Ludlow

The Law of Witnesses in 2 Nephi, Bruce A. Van Orden

Some Key Ingredients for Finding and Understanding the Truth in Science and Religion, Alvin K. Benson

In 1988 the fourth symposium covered Jacob through the Words of Mormon in the following papers:

“The Law and the Light,” Elder Boyd K. Packer

“I Speak Somewhat Concerning That Which I Have Written,” Cheryl Brown

“We Did Magnify Our Office unto the Lord,” Richard O. Cowan

Botanical Comparisons in the Allegory of the Olive Tree, Wilford M. Hess

The Religion of Moses and the Book of Mormon, Lauri Hlavaty

Enos: His Mission and His Message, Dennis L. Largey

The Testimony of Christ Through the Ages, Joseph Fielding McConkie

The Small Plates of Nephi and the Words of Mormon, Eldin Ricks

Literary Reflections on Jacob and His Descendants, John S. Tanner

Morality and Marriage in the Book of Mormon, Rodney Turner

Volume 5. Since the Annual Sidney B. Sperry Symposium covers the scripture to be studied in the Gospel Doctrine Sunday School classes in the Church, their director asked the Book of Mormon Symposium Committee to allow that his symposium be held in October and that ours be held in February. Consequently our fifth symposium, on the subject of the book of Mosiah, was held in February 1990. The following papers from that symposium were published:

“The Children of Christ,” Elder Neal A. Maxwell

What Parents Should Teach Their Children from the Book of Mosiah, Kenneth W. Anderson

King Benjamin: In the Service of Your God, Susan Easton Black

Benjamin and Noah: The Principle of Dominion, Lee L. Donaldson

Government by the Voice of the People: A Witness and a Warning, Byron R. Merrill

The Natural Man: An Enemy to God, Robert L. Millet

Church Discipline in the Book of Mosiah, H. Donl Peterson

For the Sake of Retaining a Remission of Your Sins, W. Ralph Pew

Volume 6, Alma, The Testimony of the Word, contains the following papers:

Likening the Scriptures unto Us, Elder Dean L. Larsen

Dealing with Opposition to the Church, Rex C. Reeve, Jr.

Instruments in the Hands of God: The Message of Alma 17–27, Clyde J. Williams

An Anti-Christ in the Book of Mormon-The Face May Be Strange, But the Voice Is Familiar, Gerald N. Lund

The State of the Soul Between Death and the Resurrection, Monte S. Nyman

A New Meaning of “Restoration”: The Book of Mormon on Life After Death, Richard O. Cowan

The Law of Justice and the Law of Mercy, H. Donl Peterson

The Captain and the Covenant, Thomas R. Valletta

The Book of Alma as a Prototype for Teaching the Word of God, Gerald Hansen, Jr.

Teaching in Black and White: Antithetic Parallel Structure in the Book of Alma, Its Form and Function, Donald W. Parry

The Record of Alma: A Prophetic Pattern of the Principles Governing Testimony, Fred E. Woods

The next volume covered Helaman through 3 Nephi 8 with the following papers:

The Only Sure Foundation: Building on the Rock of Our Redeemer, Robert L. Millet

The Promised Land and Its Covenant Peoples, Douglas Brinley

Patterns of Apostasy in the Book of Helaman, Robert J. Matthews

The Decline of the Nephites: Rejection of the Covenant and Word of God, John L. Fowles

They Did Remember His Words, Brett P. Thomas

Mormon’s Philosophy of History: Helaman 12 in the Perspective of

The Restoration of Plain and Precious Parts: The Book of Helaman, Monte S. Nyman

Prophets and Perplexity: The Book of Helaman as a Case Study, R. Wayne Shute and Wayne E. Brickey

Days of Wickedness and Vengeance: Analysis of 3 Nephi 6 and 7, Chauncey C. Riddle

Nephite Trade Networks and the Dangers of a Class Society, Allen J. Christenson

Secret Covenant Teachings of Men and the Devil in Helaman through 3 Nephi 8, Victor L. Ludlow

The eighth volume covered the rest of 3 Nephi chapters 9–30:

“This Is My Gospel,” Robert L. Millet

The Designations Jesus Gives Himself in 3 Nephi, Monte S. Nyman

The Commandment to Be Perfect, Gary R. Whiting

The Savior’s Missionary Training Sermon in 3 Nephi, Robert A. Cloward

The Twelve: A Light unto This People, Kenneth W. Anderson

The Doctrine of a Covenant People, Joseph Fielding McConkie

One by One: The Fifth Gospel’s Model of Service, Richard Neitzel Holzapfel

Gathering to the Temple: Teachings of the Second Day, Gerald Hansen Jr.

The Church Shall Bear My Name and Be Built upon My Gospel, Richard O. Cowan

The Three Nephites and the Doctrine of Translation, Clyde J. Williams

This final volume covers 4 Nephi through Moroni 10. There were 36 papers presented, and the referees selected the following papers:

The Mission of Jesus Christ—Ether 3 and 4, Robert J. Matthews

“The Knowledge Hid Up Because of Unbelief,” Kenneth W. Anderson

The “Author” and the “Finisher” of the Book of Mormon, John M. Butler

The Plates of Ether and the Covenant of the Book of Mormon, Lee L. Donaldson

Mormon, the Man and the Message, Richard Neitzel Holzapfel

The Spirit of Christ: A Light amidst the Darkness, Daniel K Judd

There Was No Contention, Byron R. Merrill

Moroni, the Last of the Nephite Prophets, H. Donl Peterson

Unity through the Power of Charity, Alvin C. Rencher

Preach the Gospel to Every Creature, Bruce A. Van Orden

As the general editors of the last eight volumes of the Book of Mormon Symposium series, we thank our many participants for their willingness to study the text, and write the papers, and come to the BYU campus, and present them at our annual symposia. We also thank those who participated, but whose papers were not selected by our referees for inclusion in a volume. We appreciate the various referees who have carefully read and evaluated the manuscripts. A special thanks to Lillian Wilbur, Barbara Crawley, Charlotte Pollard, and many part-time editorial assistants for their untiring efforts to bring about the publication of these volumes.

The great lesson we have observed from these symposia is that there is much more in the Book of Mormon than can be gleaned from a casual reading. The Book of Mormon opens its treasures to those who diligently study it in thoughtfulness and with the Spirit. It remains our testimony that it is a true book of scripture for all humankind to learn God’s plan from.