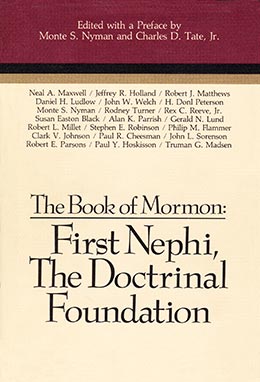 The Book of Mormon: First Nephi, the Doctrinal Foundation

President Jeffrey R. Holland proposed that the Religious Studies Center at Brigham Young University hold an annual Book of Mormon symposium on the campus. The First Annual Book of Mormon Symposium was held in the fall of 1985 under the coordination of Dr. Paul R. Cheesman, who was then the director of Book of Mormon research at the center.

Upon the retirement of Dr. Cheesman, Dr. Monte S. Nyman assumed leadership of the Book of Mormon research area in the center and also the responsibility of coordinating the second annual symposium in 1986. He and Dr. Charles D. Tate, Jr., edited the papers presented at the second symposium for publication in this volume.

Since we plan several symposia in this series on the Book of Mormon, we will follow a basically chronological path. The first symposium was an overview, with papers concerned about the Book of Mormon in general. The second symposium focused on the book of 1 Nephi, which in fulfillment of a prophecy of Isaiah forms the doctrinal foundation of the Book of Mormon. Isaiah prophesied that the Book of Mormon would bring a spiritually blind generation to understanding and from it they would learn doctrine (2 Nephi 27:35; Isaiah 29:24). The book of 1 Nephi firmly establishes the major doctrine of the Book of Mormon—that Jesus Christ is the Savior of the world—and amply demonstrates his foreknowledge of world events by which he can bring about his eternal purposes. Other doctrines such as faith in Christ, the value of his word, the power of the Holy Ghost, and the relevance of his prophets are among many substantiated in that first book.

We hope that our readers will gain further knowledge, deeper testimonies, and greater motivation to live by the basic doctrines found in the book of 1 Nephi from reading the papers in this volume.

We emphasize that the views expressed in the various papers are not necessarily those endorsed by The Church of Jesus Christ of Latter-day Saints, Brigham Young University, or the Religious Studies Center collectively or individually. Each author takes sole responsibility for the views presented in his or her paper.