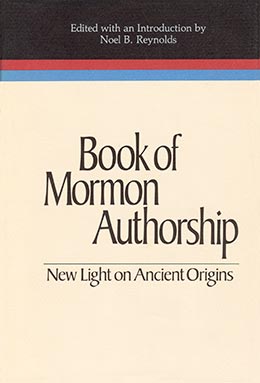 Even in an age of advanced secularism, we are able to recognize that the truly significant questions facing mankind continue to revolve around the existence of gods, the reality of the supernatural realm, and the relationship, if any, which links men to them. For many people, these have possibly never been questions at all. Presented from their youth with an authoritative scheme of gods and men in interaction as an explanation for all their experience, they may have lost, as adults, the power to conceive of alternative accounts of man and the world. But modernity is marked by the painful discovery that men are able / to make perfect sense of their experience using widely variant authoritative accounts. And by suspending belief in the supernatural altogether, scientists have been able to transcend that cultural relativism and discover marvelous secrets of the world around us that had never been suspected before.

The claim of religions to divine authority has rapidly lost its appeal as these alternative views of the world have grown in both availability and attractiveness. Pressed by unbelievers, the faithful have tried to persuade the ambivalent with testimony, arguments, and evidences. For many, it has been easy to believe on the testimony of others who have seen or heard gods or messengers from the supernatural world. But not for all. To help the more skeptical the Middle Ages, particularly, produced philosophical arguments designed to show the faithless that their most cherished beliefs about reality logically required them also to believe in God. These arguments have fallen on hard times. Other arguments point to different kinds of evidence, including physical artifacts of divine intervention in the world. Of course, the question is always whether the evidence compels belief in the divine. In most cases of alleged miracles, the skeptics are able to find plausible alternative explanations. And certainly in no well-known instance is divine intervention an unavoidable explanation.

One possible exception arises from recent attempts of scientists to explain the Turin shroud, the alleged burial cloth of Jesus. These scientific inquiries have drawn a nearly complete blank; they have produced no coherent alternative explanations for the image in the shroud, and thus have only served to reinforce the case of believers. But there are sufficient unknowns in this matter that a positive conclusion may never be available.

Another even more striking but less recognized artifact of this genre is the Book of Mormon. This readily available volume was first published in the nineteenth century by a barely literate young farmer in western New York. As if these unlikely facts of origin were not enough, Joseph Smith went on to claim that the book contains the record of an ancient group of Hebrew exiles and that it expands for us the prophetic texts coming out of that tradition. He claimed the record was given to him for a season by a divine messenger, during which time he was able to translate it by “the gift and power of God.”

Since 1830, millions of people around the world have read the book and have been convinced that Joseph Smith’s account of its origins is true. But, on hearing the account, others assume it must be a fraud. This easy assumption may well explain why almost no serious scholarly attention has been given to the matter until very recently.

If the Book of Mormon were indeed a fraud perpetrated by Smith or any of his contemporaries, it would be a very simple matter for scientists to demonstrate; for the Book of Mormon describes a people, their culture, a thousand years of history, and lands largely unknown to the nineteenth-century world. But today we enjoy a relative wealth of information about those times and people. Thanks to the flood of texts that have been newly unearthed, there are any number of straightforward scientific tests which could help determine whether this book is also of ancient origins or whether it was written by nineteenth-century Americans.

One striking thing about the Book of Mormon is that if the tests confirm its antiquity, we have no plausible alternative to Joseph Smith’s explanation of its existence. And that explanation asserts the existence of God directly. In other words, we are presented, possibly for the first time, with a claimed major miracle which can be readily subjected to rigorous public, empirical tests. This volume brings together a collection of initial efforts to mount such tests.

The first chapter introduces the reader to the Book of Mormon and the kind of tests that might be appropriate by relating the intellectual and spiritual struggles of B. H. Roberts. In a very readable style, Truman G. Madsen reveals for us the logic of Book of Mormon claims and the relevance of empirical tests for those claims.

Chapter two presents our first test of the hypothesis that the Book of Mormon might have been written in the nineteenth century. In this chapter John W. Welch presents the exciting discovery of extensive and elaborate examples of ancient Hebrew poetic forms distributed throughout the Book of Mormon. The existence of these particular forms in the Bible itself was not generally recognized until after 1942. The examples outlined by Welch not only argue for the antiquity and authenticity of the text but also contribute greatly to our appreciation of its literary elegance and spiritual teachings.

In chapter three Noel B. Reynolds draws on Welch’s literary insight and shows how an understanding of those ancient Hebrew literary patterns illuminate, in a systematic way, the author’s design in the first section of the book.

In chapter four C. Wilfred Griggs outlines the standard scholarly techniques for detecting forgeries, that is, texts which have been written in medieval or modern times and attributed to ancient authors. He then applies those techniques directly to the Book of Mormon and finds a particular set of Book of Mormon symbols which give evidence of authentic ancient Mediterranean influence.

The individual who has been most seriously and productively engaged in scholarly analysis of Book of Mormon origins and for the longest time is Professor Hugh Nibley. In chapter five he presents us with a pair of brief new studies which argue powerfully and independently that on two very ticklish questions on which accurate information about the ancient world has not been available until recently, Joseph Smith shot in the dark and scored two bulls’ eyes—a feat which Nibley finds impossible without access to a genuine ancient text.

In chapter six Eugene England reports a very simple experiment in which the lengthy flight from Jerusalem described in the Book of Mormon is carefully checked against our contemporary knowledge of the Arabian peninsula. He finds that although the Book of Mormon descriptions of that journey would seem most improbable and imaginative in the light of nineteenth-century beliefs about that wild and distant country, the account given accurately portrays the ancient trade route without any discrepancies and in impressive detail.

Moving to a different type of analysis in chapter seven we present the findings of a team of statisticians who have employed newly developed statistical techniques for author identification. Wayne A. Larsen and Alvin C. Rencher find overwhelming confirmation of Joseph Smith’s claim that the book was indeed authored by more than two dozen separate individuals. Their computer-assisted analysis also reveals that the authors of the Book of Mormon cannot even be closely approximated to the nineteenth-century individuals who might possibly have been involved in bringing the book forth.

In chapter eight a well-known American historian examines the claim that the political ideas reflected in the Book of Mormon text may be simply borrowed from early nineteenth-century American ideology. Richard L. Bushman finds that a careful and systematic review of the text refutes this claim and suggests rather that the politics of the authors are more easily identified with ancient patterns of kingship.

Chapters two through eight give examples of various kinds of scholarly analysis that can be focused on the text itself. Chapter nine presents the most recent work of Richard L. Anderson as he continues his exhaustive historical study of the men who gave this text to the modern world. The more closely he examines the confidential statements between Joseph Smith and his closest collaborator, Oliver Cowdery, the harder he finds it to believe that there was any taint of fraud or even self-deception in their account.

These studies vary considerably in their focus, their style, and the conclusiveness of their arguments. As a collection they challenge radically the easy assumption of secular scholars and sectarians that the Book of Mormon simply must have been a fraud composed and perpetrated during the early decades of the nineteenth century. It is hoped that these studies will attract the interest of other scholars who have the ability and the preparation to pursue the questions raised here.

Finally, it must be clearly stated that all the essayists would quickly agree that the studies reported here do not begin to get at the most important features of the Book of Mormon. For if it truly is an ancient record as we argue here, then it bears a most important message to the entire world. For it reports that the same Jesus who was born in Bethlehem and crucified in Jerusalem also appeared to other peoples and taught them his gospel. It bears independent witness that Christ is the Savior and Redeemer of mankind, substantiating in every way the Bible accounts. Far more so than the Turin shroud, the Book of Mormon offers powerful modern evidence for the divinity of Jesus Christ. It will be difficult for secular historians to remain indifferent to Joseph Smith.