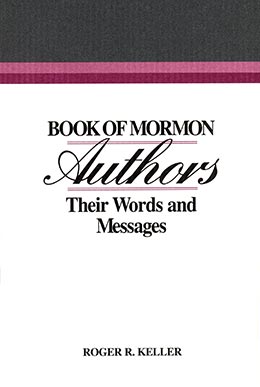 Book of Mormon Authors: Their Words and Messages

The purpose of this study is threefold: (1) to identify differences and/or similarities in meaning among select content words (words which are theologically, historically, or culturally significant) used by the Book of Mormon authors; [1] (2) to delineate among the different Book of Mormon authors based on their word usage; and (3) to suggest methodologies that may be used by others to research author individuality within the Book of Mormon. Most often the Book of Mormon is read, as are the Bible and other scriptures, to discover the eternal truths which the Lord has preserved within its pages. These truths may relate to the Atonement, the coming of Christ, the Fall, and many other topics. People of faith rejoice in these truths as they read and reread them. Such an approach is spiritually uplifting and gives great strength. However, in such an approach it is not especially important which prophet conveys what truths, since the reader basically seeks truth as he or she is guided by the Holy Ghost. Yet those who learned and conveyed the truths of and about God were persons whom the Lord commanded to speak to the people of their day. To know these prophets as individuals can only deepen our appreciation and respect for them, as well as strengthen the impact of their messages upon us.

Fundamental to this research has been the fact that prophets are persons, and that they are therefore different from one another. Many Latter-day Saints could probably distinguish between the writings of Ezra Taft Benson, Spencer W. Kimball, David O. McKay, Brigham Young, and Joseph Smith, since each prophet had characteristics and themes unique to himself. The Lord called these very unique persons, instructed them, trained them, and then summoned them to speak his message to the people of their day. Often, the issues needing to be addressed differed from period to period, and thus the messages differed. If this is the case with latter-day prophets, it was probably true of ancient prophets. Since the Book of Mormon is believed by Latter-day Saints to be a compilation of writings from numerous ancient authors, then one should be able to discern the unique content words used by the authors whose messages are preserved within its pages. It should also be possible to ascertain any differences in the meanings attached to those words.

The research in this volume first separates the words of the various Book of Mormon authors from one another and then attempts to determine which of the select content words the different authors used and how they used them. If the Book of Mormon is, as it claims, an edited compilation of writings spanning a period of approximately one thousand years, then one could expect each author to exhibit some unique linguistic fingerprints. The word cluster studies of chapter 1 will test this basic hypothesis. The subsequent chapters will examine narrow word groups to determine whether the inferences of chapter 1 are supportable.

It is recognized that a significant amount of work has been done by Wayne A. Larsen, Alvin C. Rencher, [2] John L. Hilton, and Kenneth D. Jenkins [3] on what are called “wordprints.” Their fundamental supposition is that one can differentiate between authors, given a sample of a few thousand words, by examining the use of the small, function words, i.e., the, and, but, of, etc. While wordprint studies help us recognize that different authors did indeed write the various strands within the Book of Mormon, they tell us little about what the various authors’ unique subjects may have been as found in their recorded words. By contrast, this study focuses on the content words, i.e., those that are theologically, culturally, and historically signifi-cant. If, on the basis of the content words, we can demonstrate differences in word use among authors—some of whom through wordprints have clearly been shown to be independent writers—then we can say the two studies reinforce one another. In addition, we also learn something about important words and how they are used by the authors.

We pursue the above objectives in two ways. First, we attempt to distinguish the general areas of expressed interest among the various authors by using word groups related to diverse themes, e.g., Agriculture, Christology, Church, Creation, etc. As the study will show, these word groups indicate some clear differences in usage among the Book of Mormon authors. Second, a series of word studies, focusing on individual words relating to Law/Commandment, Church/Churches, Earth, Israel, and Land/Lands will support and sharpen the differences among the authors suggested in chapter 1. It should be noted that at the end of each of the word studies is a section entitled “Theological Implications.” This section in each chapter attempts to discover the ramifications of the given word study for daily life in the modern world.

Readers will notice that the various word studies are developed in different ways. This is all a product of exploring various ways to organize the material. Hence, there are several models that others may wish to use to perfect or to expand interpretation.

The end result is that there are clear and recognizable differences in the content words used and the meanings attached to them by the authors within the Book of Mormon. It is not, however, the intent of this study to explore the synonyms that a given author may have used in place of the particular word or words under consideration. Such a study would be interesting and instructive, but such an expanded enterprise must be left for others.

[1] Throughout this study, the term “author” will be applied to both writers and speakers within the Book of Mormon. Thus, not only are Nephi 1, Jacob, and Mormon “authors,” but so are the Lord, Jesus, and the Father.