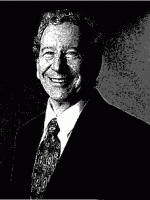 David Winston received his MA and PhD in Greek and Latin from Columbia University. He was ordained a rabbi in 1955, and, after serving as instructor in Greek and Latin at Columbia University from 1958 to 1960, he was appointed associate professor of rabbinic and Hellenistic literature at the University of Judaism, Los Angeles. In 1966, he was appointed professor of Hellenistic and Judaic studies at the Graduate Theological Union in Berkeley, California, and visiting professor at the University of California.

He was visiting professor at the Hebrew University of Jerusalem from 1970 to 1971, and was a research fellow at its Institute for Advanced Studies on Mt. Scopus in 1976. He received his DHL (honoris causa) in 1987, when he was a visiting professor at Hebrew Union College in Cincinnati, and he delivered the Efroymson lectures for that year. He was awarded a Natural Endowment for the Humanities senior fellowship in 1978 and again in 1986.