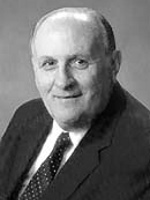 Elder Smith passed away in 2009. He and his wife, Barbara, had seven children, thirty-nine grandchildren, and seventy-eight great-grandchildren.