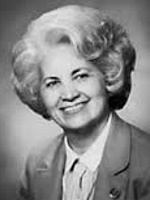 Barbara B. Smith was born on 26 January 1922 in Salt Lake City, Utah. In 1974 she succeeded Belle S. Spafford, who had been the Relief Society president for nearly thirty years, having taken up the position in 1945. Prior to her becoming president of the Relief Society, Sister Smith had served on a variety of general boards in the same organization. She married Douglas H. Smith in the Salt Lake Temple on 16 June 1941. They were the parents of seven children. Sister Smith died on 13 September 2010 after suffering from pulmonary fibrosis for a number of years.