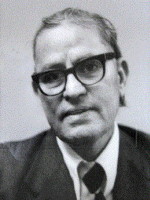 Dr. Fazlur Rahman Malik, originally from West Pakistan and most recently a professor at the University of Chicago, has served with distinction on the faculties of universities in four countries: Canada, England, the United States, and his native Pakistan. Admired and respected by his colleagues and students, he was a recognized authority on the culture and religion of Islam. He passed away in 1988.