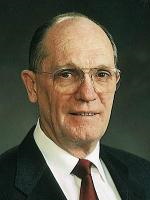 Lloyd Aldin Porter (born June 30, 1931) has been a general authority of The Church of Jesus Christ of Latter-day Saints since 1987.

Porter worked with J. Richard Clarke in the insurance business, eventually replacing him as head of an Idaho Falls agency. Porter later served as a counselor in the Boise Idaho Temple presidency. He also served as a stake patriarch in Meridian, Idaho. In 1986, he become president of the church's Louisiana Baton Rouge Mission.