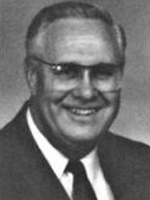 Harry Donl Peterson (1930–94) was a professor of ancient scripture at Brigham Young University and the Pearl of Great Price director at the Religious Studies Center at BYU. Born and raised in Lehi, Utah, he served a mission in the Western States Mission (headquartered in Denver, Colorado). He received his bachelor's and master's degrees from BYU. He also earned a doctorate in education from Washington State University. Starting in 1964 he was a professor at BYU. Prior to that he worked as a seminary and institute teacher and administrator with the Church Educational System. At BYU he directed several travel study programs as well as being involved with the Know Your Religion program.

In The Church of Jesus Christ of Latter-day Saints (LDS Church), Peterson served three times as a bishop and was also president of the BYU Fifteenth Stake. He served in the first branch presidency of the Jerusalem Branch.

Peterson married Mary Lou Schenk in the Salt Lake Temple in 1953, and they had six children. Peterson died of cancer on March 21, 1994.