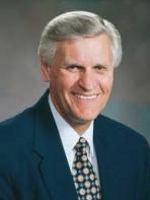 Glenn L. Pace was born in Provo, Utah, to Latter-day Saint parents. He served as a missionary for the church in the New England States Mission from 1960 to 1962, and has since served in the LDS Church as an elders quorum president, counselor in a bishopric, and stake clerk. He also served as the first president of the Australia North Mission of the church in 1992, while serving in the First Quorum of the Seventy. Elder Pace became the second counselor to Presiding Bishop Robert D. Hales in 1985. In 1992, he was released from this position and became a member of the First Quorum of the Seventy. In 1997 and 1998, he was a member of the general presidency of the Church's Sunday School, and from 2001 to 2003 he was in the general presidency of the Young Men organization. Elder Pace was released and given emeritus status at the LDS Church's October 2010 General Conference. He is married to Jolene Clayson and they are the parents of six children.